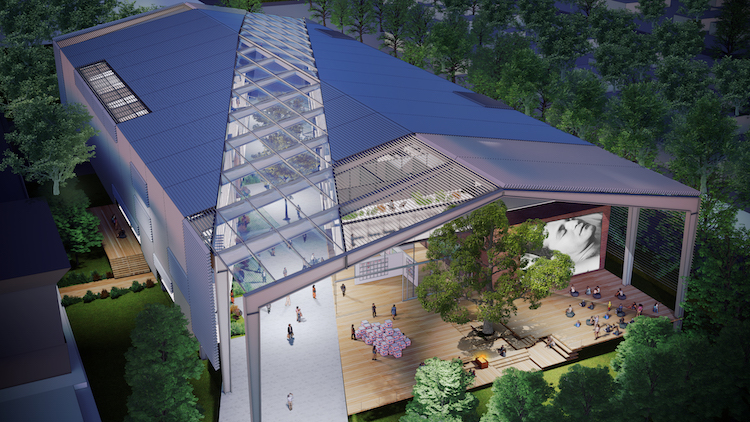 Rice University’s new home for student art will be named Susan and Fayez Sarofim Hall, and it will be designed by a team helmed by an alumnus with a deep appreciation for the arts at Rice and in Houston.

Charles Renfro will lead Diller Scofidio + Renfro’s design team. DS+R was chosen for Sarofim Hall following a national competition. With architecture honoring the legacy of the former Rice Media Center and Art Barn, the new Sarofim Hall will be an inventive take on the prefabricated building, incorporating exhibition areas, labs, studios, shops, faculty offices and other facilities serving as collaboration points for artists across mediums.

“I am excited to see Charles Renfro’s extraordinary artistic vision and unique understanding of our campus culture and history shape the design of this important new facility,” said Rice President David Leebron. “The building anchors one of our key departments, Visual and Dramatic Arts (VADA), and completes for now the arts district of our campus that we envisioned. It is designed with the potential for additional expansion as we seek to grow the department’s achievements and recognition under its new chair, Bruce Hainley.”

The building nods to the Art Barn and Media Center, which were commissioned by Houston arts patrons John and Dominique de Menil in 1969 when they founded the Institute for the Arts at Rice, with a dramatic advancement of the ubiquitous Butler building, the mass-produced, pre-engineered metal structures that became popular following World War II.

The striking design for Sarofim Hall frees the steel frame from its skin, transforming a hermetic building into an extroverted mini-campus, welcoming students, faculty and the general public into its protected exterior spaces to engage with the arts at Rice.

Renfro recalls long walks across campus between classes for architecture, painting and photography during his undergraduate days.

“Cross-disciplinary discourse is a hallmark of the arts in the 21st century, but it has been difficult at Rice since its facilities are scattered all over campus,” Renfro said. “Sarofim Hall will not only bring these programs together for the first time, but also facilitate experimentation and collaboration between disciplines through the use of open, transparent, indoor/outdoor and public-facing space.”

Before becoming a partner at Diller Scofidio + Renfro (DS+R) in 2004, Renfro graduated from Rice in 1989 and received his Master of Architecture degree from Columbia University in 1994. DS+R’s impressive international portfolio includes New York City’s High Line, the Shed, an expansion to the Museum of Modern Art and the renovation of Lincoln Center featuring an expansion of the Juilliard School.

DS+R’s vision for Sarofim Hall also incorporates a glass-lined pedestrian ArtStreet that bisects the four-story structure and acts as a new entrance to the university, welcoming the public to witness what’s happening inside the new space. It will be situated adjacent to the Moody Center for the Arts and a short stroll from the Shepherd School for Music’s Alice Pratt Brown Hall and the newly constructed Brockman Hall for Opera, which seats 600 patrons.

As the arts evolve, Sarofim Hall will evolve, too. The studios and facilities are designed to guard against obsolescence by encouraging students to fashion their work areas according to their artistic needs.

“The building shell is thought of as a piece of infrastructure: simple, durable and timeless, while the insides can transform as needs change,” Renfro said.

Once completed, Sarofim Hall will complement the robust curriculum championed by Hainley, one of the country’s leading art critics and educators. The incoming VADA chair's plans include a future graduate level program in the fine arts.

When Hainley takes over in January, he will lead one of the most visible departments on campus. VADA serves over a quarter of undergraduates at Rice each semester, and Niche recently ranked the university No. 4 in the U.S. for art majors.

“With Diller Scofidio + Renfro helming the design of a building that will provide a flexible space for new thinking around the making of contemporary art and performance, Rice will be poised to activate dynamic interdisciplinary as well as interdepartmental collaborations, mindful of the tradition of aesthetics and social justice that the de Menils began locally,” Hainley said.

“Soon the new building will allow a vital humanities department to resituate itself and the arts as central to the university, making for one of the most compelling sites of invitation to the greater community of Houston,” Hainley said.

University Architect George Ristow said the potential to activate outdoor plaza and working art spaces is particularly exciting, especially in dialogue with the Moody Center for the Arts directly next door.

“What’s really unique about the site for this project is the history of the former Art Barn and Media Center buildings — two simple yet iconic metal buildings whose significance cannot be ignored,” Ristow said. “DS+R’s initial concept for the new building cleverly weaves the symbolism of that history with the scale, materiality and porosity of the broader campus fabric.

“With the building being at the outward-facing perimeter — and at an entrance into campus that has evolved into one of the most active and dynamic access points — it will undoubtedly have a different kind of visibility beyond the hedges that will be leveraged as a new and unique gateway to the Rice arts corridor,” said Ristow.