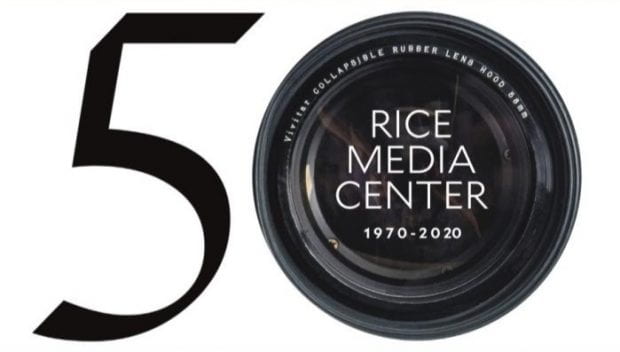 The golden anniversary of the Rice Media Center, which has housed Rice University’s film and photography programs since its founding 50 years ago, will be celebrated with three weeks of exhibitions, speakers, signings and screenings of the most famous — and infamous — films to come out of the university.

The vision of Jean and Dominique de Menil was fulfilled with the creation of the Rice Media Center building, which opened in February 1970 to house what is now the Department of Visual and Dramatic Arts and the Rice Cinema program. The Media Center and its since-demolished sister structure, the “Art Barn,” were designed by Houston architect Eugene Aubry, best known for creating such public buildings as the Rothko Chapel and inspiring the “Tin House” aesthetic now seen in corrugated metal structures across the city.

Since that time, the Rice Media Center has served as the home of some of Houston’s most vital film and photography work, from the pioneering vérité documentaries of Academy Award nominee James Blue to Geoff Winningham’s critically praised first book of photos, which captured the raw energy of professional wrestlers on a “Friday Night in the Coliseum” in 1971.

Festivities kick off Feb. 21 at 7 p.m. with a “work-in-progress” screening of “Once I Moved Like the Wind: Geronimo’s Final Surrender” in the silver-screen cinema of the Media Center. A collaboration between Rice film professor Brian Huberman, who has taught film at Rice since 1975, and producer Edward Hugetz, the film explores two difficult and sometimes dangerous journeys vital to experiencing Geronimo’s last days of freedom. A Q&A will follow.

The following night, photography professor Winningham will celebrate a new, second release of “Friday Night in the Coliseum” with an exhibition of original images from the book. A Feb. 22 reception will take place from 6 to 9 p.m.

Feb. 23 at 2 p.m., Winningham will give a slide presentation and illustrated talk titled “Alfred Stieglitz and Johnny Valentine: Untold Stories of Wrestling with Truth and Art.” He will also sign copies of the second edition of “Friday Night in the Coliseum,” which includes previously unpublished images.

Festivities continue through March 14, including a March 7 screening of the timeless 1978 documentary “Who Killed the Fourth Ward?” by Blue and Huberman on the gentrification of Houston’s inner city, and a one-man show by Sonny Carl Davis, the star of 1983’s “Last Night at the Alamo,” who will present the story of his life as an actor March 13.

The 50th anniversary celebration will culminate March 14 with a day of programming that will include a screening of the rarely shown “Portrait of a Klansman” by filmmakers Wayne Derrick '81 and Brad Walker ‘83, followed by a panel discussion and a screening of “Last Night at the Alamo.” Huberman, Davis and writer/director Kim Henkel will participate in a final panel discussion after the last film.

A full lineup of events can be found at vada.rice.edu/50th-anniversary. All events take place at the Rice Media Center and are free and open to the public.