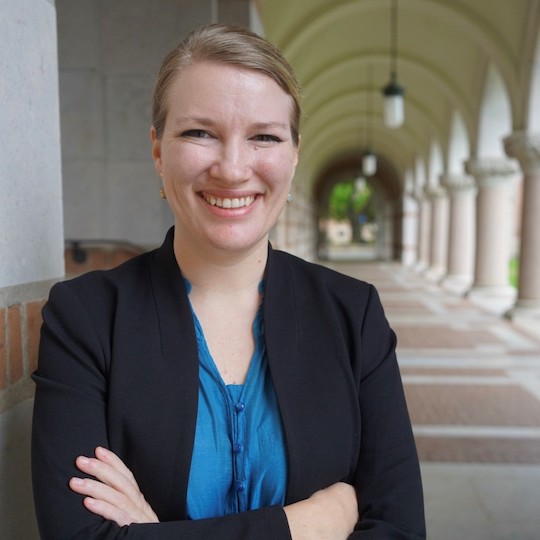 Rachel Schneider has been named the new director of the Religion and Public Life Program (RPLP), which will now be housed in Rice University’s Boniuk Institute for Religious Tolerance.

Schneider, who most recently served as a postdoctoral research fellow in the Religion and Public Life Program, replaces Elaine Howard Ecklund, the newly appointed director of the Boniuk Institute and founding director of RPLP, who led the program for 12 years.

RPLP is dedicated to building common ground through research on religion, training the next generation of thought leaders and translating research for relevant communities and other diverse audiences. Schneider said she’s committed to advancing research that helps people understand the role religion plays in public life and harnessing the power of that research to foster dialogue, challenge stereotypes and help people of all beliefs work together toward the common good.

“Even if one is not personally religious, it is undeniable that religion touches every aspect of society — from politics to the workplace to family life — both in the U.S. and globally,” she said. “It is imperative that we understand religion’s impact on pressing social issues such as racism or gender inequality. In a time of deep social divisions, it is also imperative to understand how religion is a source of meaning and values for individuals and communities, informing how they relate to others and see the world around them.”

Schneider has been instrumental in RPLP’s research and outreach initiatives since joining the program as a postdoctoral fellow in 2019, studying topics such as religious discrimination, religion at work, and gender and religion. She has conducted qualitative social science research, written articles, led public events and helped produce the podcast “ Religion Unmuted,” all of which exemplify RPLP’s commitment to research translation and public scholarship.

Schneider’s academic career has focused primarily on religion, race, gender and inequality. Working at the intersection of the humanities and the social sciences, she has published research articles on religion and race ; religion in the workplace ; religion, health and science ; and religious responses to poverty and inequality in the United States and South Africa. She is also the co-editor of a recently published volume examining millennials and religious change .

Schneider earned a Ph.D. in religion from Rice in 2017, focused on Christianity, religion in Africa, ethics and anthropology.

“As the RPLP enters its next phase of growth, I look forward to continuing to deepen relationships with community and research partners and advancing the interdisciplinary study of religion and related areas, such as African and African American studies and women, gender and sexuality studies,” she said.

Schneider praised Ecklund for her vision in launching RPLP and her work toward increasing its impact on society in the years since.

To learn more about the Religion and Public Life Program and its mission, visit https://rplp.rice.edu/.