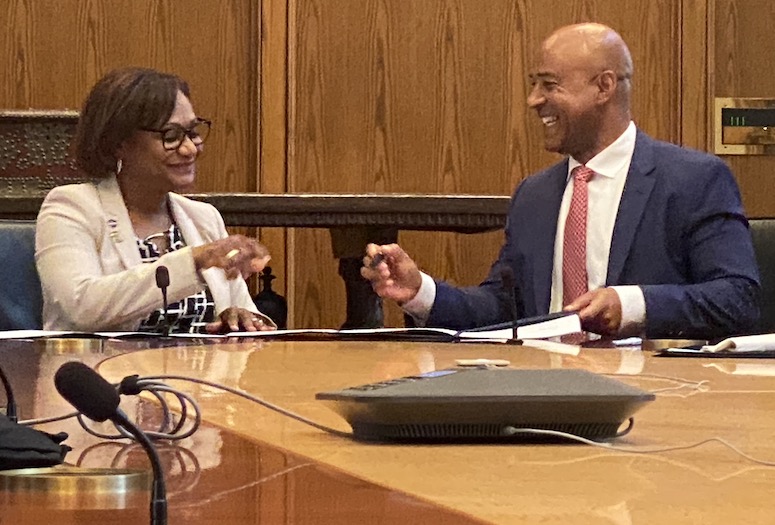 NASA and Rice University officials met at the university’s campus today to formally extend their agreement to share research efforts and educational outreach.

It also formalizes NASA’s participation as a co-host in the upcoming campus celebration of the 60th anniversary of John F. Kennedy’s famous “We choose to go to the moon” speech at Rice Stadium. Public events will take place at Rice from Sept. 10-12.

For its part, Rice will look for ways to involve NASA researchers as visiting scholars, share information that could lead to collaborations, encourage Rice students to seek NASA internships and pursue opportunities to engage in bioscience and human health and performance research. This builds upon the last decade of collaboration on the 2012 SAA and an extension in 2017.

The agreement includes a standing invitation to Rice to give and attend presentations at Houston’s Johnson Space Center, including its Gateway to Space lecture series, and to NASA personnel to present at and attend the Rice Space Institute’s Space Frontiers lecture series, the Professional Science Masters in Space Studies seminar series and other events.

“The renewal of this agreement represents a historic collaboration that supports some of the world’s most important research and educational outreach,” Rice University President Reginald DesRoches said. “Rice is privileged to be such a principal partner in pursuits related to space exploration. We look forward to our continued partnership and the outcomes it presents.”

“NASA’s Johnson Space Center has a long history of working with colleges and universities since the early days of the Mercury, Gemini and Apollo programs to help us achieve our human spaceflight missions,” said Vanessa Wyche, director of Johnson Space Center. “We are eager to extend our partnership with Rice University to collaborate in vital research and technology development initiatives that will enable us to meet our nation’s exploration goals and advance human spaceflight as we work to land the first woman and first person of color on the moon under Artemis.”

According to Wyche, NASA is ready to launch its Artemis I test flight to the moon no earlier than Aug. 29, the initial foray into a new era of human deep space exploration.

“I am really excited that both parties wanted to continue the level of engagement that an SAA facilitates,” said David Alexander, a professor of physics and astronomy and director of the Rice Space Institute. “This provides great opportunities for both our faculty and students.”

Alexander noted the success of previous collaborations under the agreement, such as those by Rice computer scientist Lydia Kavraki in the Robonaut program and mechanical engineer Marcia O’Malley, whose students have worked as NASA interns, was key to negotiating the extension for a third five-year term.

Rice’s connections to NASA go back to the agency’s very beginnings, donating the land for Johnson Space Center and founding the first space science department in an academic institution. (Read about its history, as told by founder and emeritus professor Alexander Dessler, here.) Several alumni have been part of the astronaut program, including Shannon Walker, who holds three Rice degrees; Peggy Whitson, who holds the American record for the most time in space; and Nichole Ayers, who joined the corps late last year. Curt Michel, a distinguished professor of astrophysics at Rice for many years, was also a member of the Apollo astronaut corps.

Notably, veterans of the Apollo program reunited at Rice Stadium in July 2019 to celebrate the anniversary of the first moon landing and take part in a NASA video to mark the occasion.