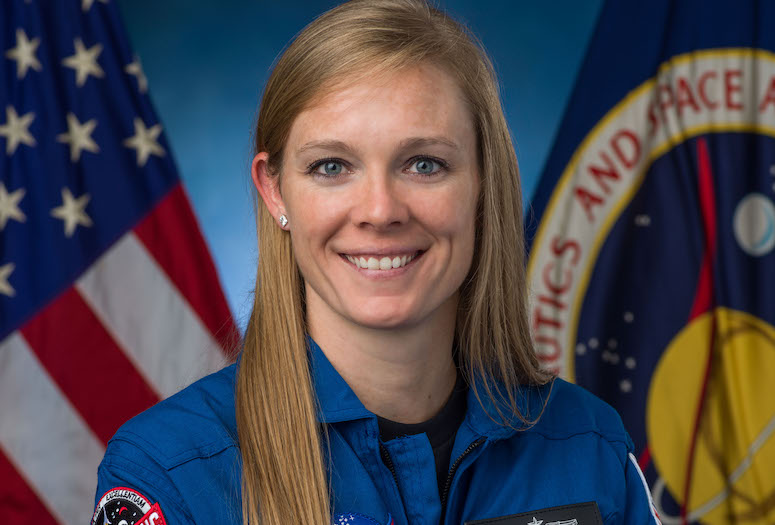 Air Force Major Nichole Ayers, a fighter pilot from Colorado with a master’s degree from Rice University’s George R. Brown School of Engineering, has been selected by NASA as part of the 23rd class of astronauts.

Ayers joins a storied program on the cusp of a boom in spaceflight, with manned rockets launching once again from American soil and progress toward the next round of missions to the moon.

After graduating from the Air Force Academy, Ayers spent two years at Rice, where she earned a master’s in computational and applied mathematics in 2013, specializing in fluid dynamics.  She was mentored at Rice by Tim Warburton, a former CAAM professor now at Virginia Tech.

Since then, she’s completed flight school, qualified as an instructor pilot in the T-38 Talon and F-22 Raptor, and flown more than 200 combat hours over Iraq and Syria.

NASA gave Rice News the opportunity to talk with Ayers a day after agency administrator Bill Nelson introduced the class, now part of the Artemis generation of astronauts, to the nation at Johnson Space Center. The 10 members, selected from a pool of 12,000 who applied to become astronauts in this round, begin formal training in January.

RN: Do you have a goal or a preference for the International Space Station, the moon or Mars?

Ayers: Oh, man. I'm just excited to be here at this point. You know, we've got two years of training coming up, and then I would love to do any mission that NASA wants me to do. The next steps are getting to the moon and learning how to live long-term in space, and then eventually to Mars. So really excited about where human spaceflight is going. And, you know, just happy to be here and be part of the NASA team.

RN: When did you apply to the astronaut corps?

Ayers: I applied in March of 2020, for this class. The interviews started in June, the final round of interviews were in August and September, and then they just made the announcement yesterday (Dec. 6).

RN: As one who’s grown up with space travel as part of the landscape, what attracted you to join NASA?

I finally met the minimum requirements to apply last year for the NASA program. I just tried to work hard every day to get to become one of the candidates.

RN: What was the last requirement you had to meet?

RN: Have they put you on a training track based on your experience or interests?

Ayers: We actually all go through the same training process. So that's pretty cool. We all get to be a team together and get to learn together. So what we'll do is learn the T-38. For the pilots, we will learn how to fly from the front seat, and the non-pilots will actually learn to fly in the back seat. And then we get to fly together once we're all qualified.

That's what I'm probably most excited about. But we'll also learn space station systems, we'll learn robotics, we’ll learn how to do spacewalks and then we'll even learn the Russian language. So we will all go through the same training process.

Ayers: I actually flew the T-38A model at the beginning of my career and the NASA T-38s are updated versions of that. So I'm pretty excited to get back into the NASA version. It's going to be a common theme, but getting to know my teammates while we're flying, I think, that's one of the coolest parts, to get to sit together in the jet and go from point A to point B and learn about all these amazing backgrounds of my classmates.

RN: What did you learn at Rice that's going to be helpful?

Ayers: Learning higher-level math and really deep-diving into the subject is what's going to set me up. I've been telling everybody it's about finding something you're passionate about and really digging into that and working hard at that.

And that's what getting a master's degree at Rice is all about, really digging into a subject and getting good at it and working hard. So I think that will truly transfer into the training that we're about to go through.

RN: If you could take a Rice professor with you, who would it be?

Ayers: Oh, boy. Dr. Warburton taught me all I know about computational fluid dynamics, and I'd love to go to space with him. He's a great human, got to know him really well and learned a ton from him. So I think that'd be awesome to share the NASA experience with him.

RN: The first astronauts were combat and test pilots. Do you feel like you're standing on the shoulders of giants?

Ayers: Absolutely. I mean, I've used that term, actually, a few times already in the last few days. Everybody else has paved the way for us to become part of the NASA team. Hopefully, we can then, after training, start to build the way for others as NASA starts to work towards the moon and long-term spaceflight.

RN: Extravehicular activities seem like the ultimate flying experience. Do you look forward to spacewalking?

Ayers: Yes, sir. I've heard amazing things. You know, I don't think anything will ever beat the view from the space station, and especially from spacewalks, when you're actually outside the space station and get to see the world. I cannot wait for that experience.

RN: Are you anticipating the possibility of going to the moon? And how does your family feel about that?

Ayers: My family's super excited, you know, they couldn't be more proud. My parents, definitely. I've got a twin sister and all of her kiddos were here this weekend. And then I think my biggest supporter, who's more excited than anybody, is my husband.

I've always had the support of my family. I think that's one of the main reasons that I've made it to this bar and get to join the NASA team here.

RN: Earlier astronauts have waited years to go to space, but with commercial space enterprises ramping up, it doesn't seem like you're going to have to wait that long.

Ayers: Hopefully not. We'll see. You know, we have at least two years of training and then we'll be assigned to a mission after that. So no idea on the exact timeline, but I’m excited to be part of the team.