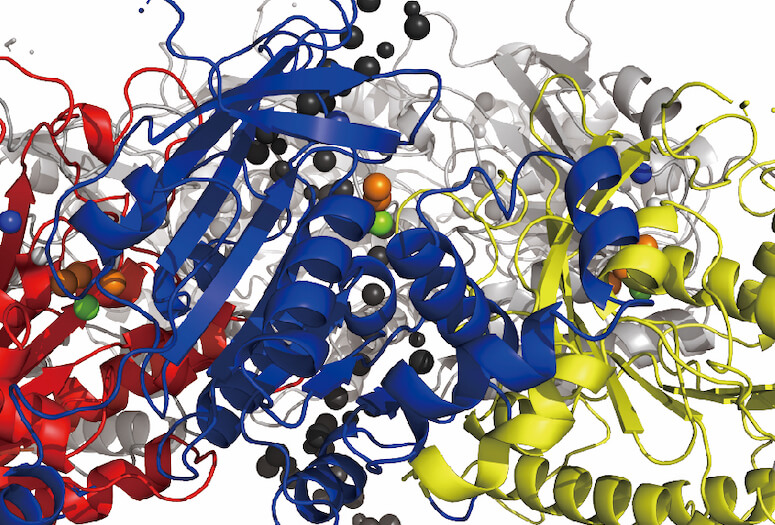 Knowing the structure of a complex biological system isn’t nearly enough to understand how it works. It helps to know how the system moves.

In that light, Rice University researchers have modelled a key mechanism by which DNA replicates.

A simulation shows how a six-sided helicase protein moves along a strand of DNA as it separates double strands into single strands during replication. Rice University theorists found that ATP hydrolysis is key to the proteins' stair-step motion. One complete step is seen here. Produced by Yang Gao and Shikai Jin

The synergy between the experiments and large-scale simulations they describe in the Proceedings of the National Academy of Sciences could become a paradigm for modeling of the mechanisms of many complex biological systems.

“These are dynamic processes that cannot be captured well with experimental methods alone,” said Gao, an assistant professor of biosciences and a CPRIT Scholar in Cancer Research. “But it’s important to show the mechanisms of these helicases, because they’re essential for DNA replication, and also possible drug targets.”

Hexameric helicases have six sides that self-assemble from peptides into a washerlike ring that separates the parental double strands of DNA into daughter single strands. Until now, researchers have been unable to pin down how the helicase steps along as it unzips the double strand.

The Rice simulations buttress the idea that DNA-binding loops within the six subunits of the helicase form a sort of staircase that moves down the DNA backbone powered by ATP hydrolysis, the process by which stored chemical energy in ATP molecules gets released.

It was known that ATP is drawn to NTPase proteins in each subunit to drive the stepping movement. But researchers hadn’t precisely understood that ATP hydrolysis is the key. The Rice team found that ATP tightly binds the helicase subunits, but that hydrolysis significantly lowers the energy barrier for subunit disassociation, allowing the protein to step forward.

The researchers noted that because the helicase-DNA complex is so large, there have been only a few attempts to simulate translocation of the helicase from one end of the strand to the other. The Rice hybrid of two coarse-grained simulation techniques provided the opportunity to study the process from beginning to end.

The simulations revealed several previously unknown intermediate states and pinpointed the interactions involved in the long-distance movement of the helicase. They showed each step of translocation can travel more than 12 nucleotides along the backbone.

To look for the mechanism, the team focused on the T7 bacteriophage, a virus that infects bacteria often used as a model system. To simulate its helicase, known as gp4, the researchers combined two force fields: AWSEM, initially developed by Wolynes and his colleagues to predict how proteins fold, and open3SPN2, a DNA simulator developed by molecular engineer Juan de Pablo at the University of Chicago. Force fields describe the forces that dictate how atoms and molecules move when in contact. (The novel combination of force fields was the subject of a Rice-led 2021 paper in PLOS Computational Biology.)

Both force fields are coarse-grained molecular models based on machine learning that use only a subset of the atoms in a system but still provide accurate results while greatly cutting computation time.

“Combining the models enabled GPU acceleration so we could make our molecular dynamics simulations very fast,” Jin said. “The combined software is now 30 times faster than versions we used for other studies.”

It helps that T7 is half the size of helicases in human cells. “In human systems, there are six different polypeptide chains in the helicase, but in T7, it’s the same one that makes six copies,” he said.

“Because our new form of open3SPN2 deals with a single strand of DNA, it lets us analyze processes where the ordinarily double-stranded DNA opens up as it does in the presence of the helicase,” said Wolynes, co-director of Rice’s Center for Theoretical Biological Physics. “The single-stranded DNA force field itself is novel but this was just a background in this project, where it enables us to look at the process in great detail.”

“The cryo-EM structures we have for these essential complexes are physiologically precise, but these systems are dynamic,” Gao said. “They have to move to do their jobs, and there’s still a lot we want to know about how they do that.

“That’s where these computational models can make a big contribution and they will, for sure, be adapted to other large systems to examine rather important questions,” he said.

Co-authors of the paper are Rice graduate students Carlos Bueno and Wei Lu; postdoctoral associate Xun Chen; and alumni Qian Wang of the University of Science and Technology of China, Hefei, and Mingchen Chen of neoX Biotech, Beijing. Wolynes is the D.R. Bullard-Welch Foundation Professor of Science and a professor of chemistry, biosciences and physics and astronomy at Rice. 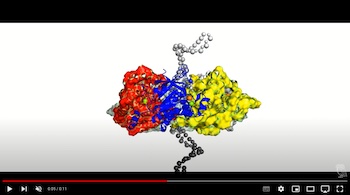 A simulation shows how a six-sided helicase protein moves along a strand of DNA as it separates double strands into single strands during replication. Rice University theorists found that ATP hydrolysis is key to the proteins' stair-step motion. One complete step is seen here. (Credit: Yang Gao/Shikai Jin/Rice University)

A helicase protein model created at Rice University shows a before-and-after of how the six-sided ring moves along DNA to split double strands into single strands in response to ATP hydrolysis during replication. (Credit: Shikai Jin/Rice University)