Rice lab captures unseen details of replication, clues to how mutations can happen 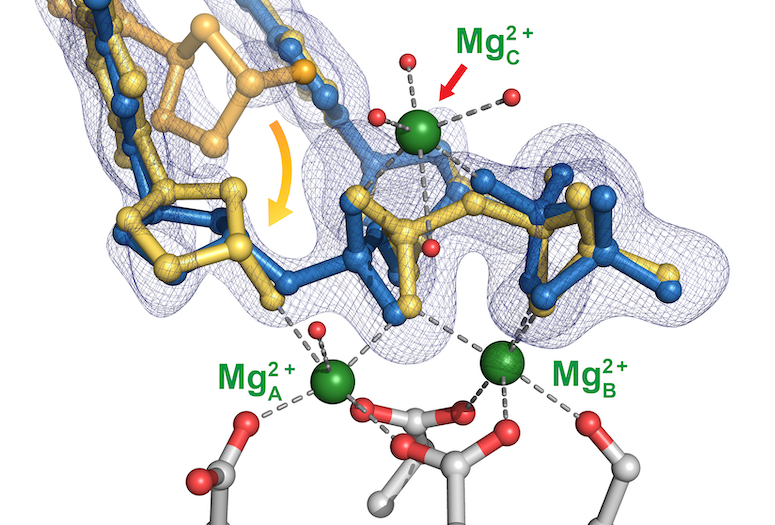 When cells reproduce, the internal mechanisms that copy DNA get it right nearly every time. Rice University bioscientists have uncovered a tiny detail that helps understand how the process could go wrong.

Their study of enzymes revealed the presence of a central metal ion critical to DNA replication also appears to be implicated in misincorporation, the faulty ordering of nucleotides on new strands.

The observation reported in Nature Communications could help find treatments for genetic mutations and the diseases they cause, including cancer.

All of the proteins involved in DNA replication rely on metal ions -- either magnesium or manganese -- to catalyze the transfer of nucleotides to their proper positions along the strand, but whether there were two or three ions involved has long been a topic of debate.

The Rice team seems to have settled that through studying a polymerase known as eta, a translesion synthesis enzyme that guards against ultraviolet-induced lesions. Those with mutations on the poly-eta gene often have a predisposition for xeroderma pigmentosum and skin cancer, according to the researchers.

Gao said typical polymerases resemble a right-handed shape, and he thinks of them in terms of an actual hand: “They have a palm domain that holds the active site, a finger domain that closes up to interact with the new base pair, and a thumb domain that binds the primer/template DNA,” he said.

But until now, scientists could only guess at some details of the well-hidden mechanism by which polymerases do their job, and occasionally fail. The type of time-resolved crystallography used in Gao’s lab allowed the researchers to analyze proteins crystallized at 34 intermediate stages to define the positions of their atoms before, during and after DNA synthesis.

“This kinetic reaction is difficult to capture because there are many atoms, and they work very fast,” said Gao, an assistant professor of biosciences who joined Rice as a CPRIT Scholar in 2019. “We’ve never known how the atoms move together because the spatial information was missing. Freezing the proteins and a small molecule substrate lets us capture this catalytic reaction for the first time.”

The study led to their theory that the first of the three metal atoms in eta supports nucleotide binding, and the second is the key to keeping the nucleotide and primer on track by stabilizing the binding of loose nucleotides to the primer located on the existing half of the new strand (aka the substrate). Primers are short DNA strands that mark where polymerases start stringing new nucleotides.

“Only when the first two metal ions are in check can the third one come and drive the reaction home,” said Chang, suggesting the process may be universal among polymerases.

The researchers also noted poly-eta contains a motif that makes it prone to misalignment of primers, leading to a greater chance of misincorporation.

“This is, first, about a basic mechanism of life,” Gao said. “DNA has to be copied accurately, and errors can lead to human disease. People who study these enzymes know that for DNA synthesis, they always do much, much better than they should because there’s a very limited amount of energy available for them to choose the right base pair.”

For Gao, the real takeaway is in proving the ability of time-resolved crystallography to observe an entire catalytic process in atomic detail.

“This lets us see exactly what’s happening in a dynamic catalytic process over time,” he said. 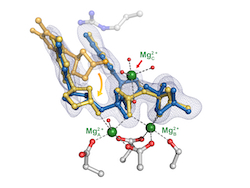 The structure of poly-eta, an enzyme that helps direct DNA replication. A time-resolved crystallography study of the enzyme at Rice University uncovered the importance of a third metal ion that helps stabilize the process, ensuring accuracy. (Credit: Yang Gao Lab/Rice University) 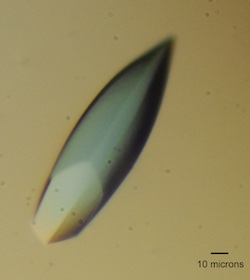 A set of microscopic crystals like the one above used to freeze the structure of an active enzyme helped Rice University scientists uncover the mechanism in a polymerase that helps direct the replication of DNA. (Credit: Yang Gao Lab/Rice University) 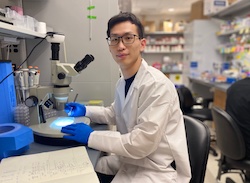 Rice University graduate student Caleb Chang carried out time-resolved crystallography experiments to determine the mechanism of a polymerase as it aids in the replication of DNA. (Credit: Photo by Joshua Chang)