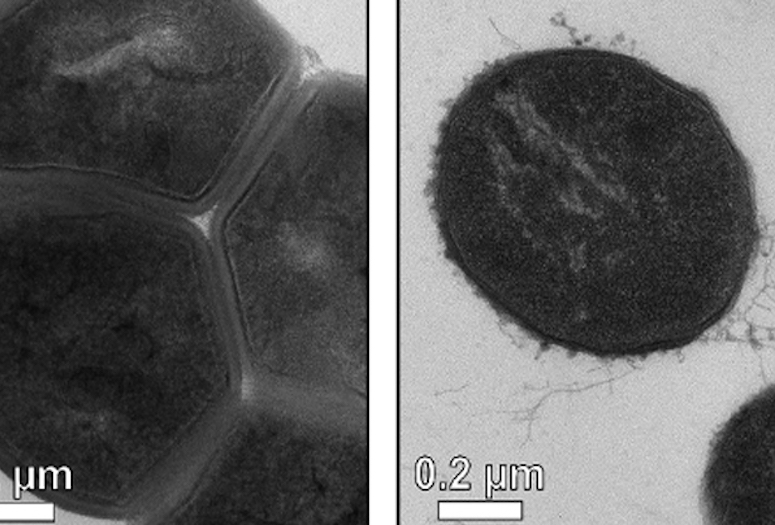 A new class of motorized molecules that kill specific bacteria shows promise to curb the threat of antibiotic resistance to human health. 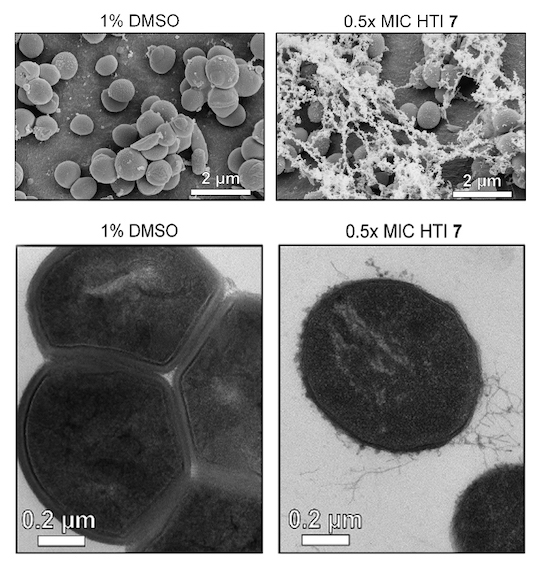 Rice University scientists led a team developing light-activated hemithioindigo (HTI) molecules that destroy Gram-positive bacteria and the biofilms they form. The molecules do so by enhancing the local generation of reactive oxygen species (ROS) that chemically attack and destroy drug-resistant cells.

The new molecules differ from, and are complementary to, others created at Rice that are also activated by light but drill into cell membranes to kill them.

Like the drills based on Nobel Prize-winning work by Bernard Feringa, the HTI-based molecules are activated by visible light rather than harmful ultraviolet radiation.

Both are products of Rice chemist James Tour and his colleagues. Rice alumni Ana Santos, a postdoctoral global fellow at the Health Research Institute of the Balearic Islands in Palma, Spain, and Alexis van Venrooy, now a senior scientist at Genesis Therapeutics, San Diego, are co-lead authors of the new study in Advanced Science.

The HTI-based molecular machines consist of two halves: a thioindigo unit linked to a carbocycle via a central carbon double bond. When triggered by visible light, the molecule undergoes a conformational change that results in either a drill-like 360-degree motion or a shift between two conformations, like an “on/off” switch, depending on the molecular design.

In the process, activated HTIs react with the cell and molecular oxygen, transferring electrons to produce ROS that batter the target cells.

“These are not killing cells by mechanically ripping open the membranes like the earlier ones do,” Tour said. “They induce enough disruption that reactive oxygen species and free radicals are generated and end up killing the cells.

“So it’s not the fast necrotic death that we saw before,” he said. “It’s a little bit slower, but it’s extremely efficient.”

“An important advantage of these molecules is that they have a narrow spectrum of activity and selectively kill a specific group of bacteria, Gram-positive bacteria,” Santos said. “Therefore, they are less likely to cause the side effects seen with broad-spectrum antibiotics that indiscriminately kill both ‘bad’ and ‘good’ bacteria, and they are also less likely to lead to resistance because only one group of bacteria is affected.”

Gram-positive bacteria lack an outer membrane (though they have a thick peptidoglycan layer), and this seems to make them more susceptible to ROS that oxidize and break down their cell walls.

The researchers tested several HTI variants on seven Gram-positive strains of bacteria and found the molecule killed all of them in the presence of light. (HTIs were less effective on Gram-negative bacteria, presumably because their double membrane prevents HTI from entering the cell. But permeabilizing them with a Tris-EDTA buffer solution made them more likely to be killed by HTIs.)

They also exposed colonies of Staphylococcus aureus with and without the presence of ROS scavengers and found those with the scavengers curtailed the effectiveness of the hemithioindigo molecules. Without scavengers, the ROS had the desired effect on bacteria.

The study showed that HTIs also killed antibiotic-tolerant persister cells of different Gram-positive strains in as little as 25 minutes, faster than conventional antibiotics. In every case, repeated exposure to HTIs did not increase the bacteria’s resistance to treatment.

Because the treatment is based on ROS rather than mechanical action, it does not harm mammalian cells, Santos said. “This paves the way for a new antimicrobial therapy that can safely target Gram-positive pathogens associated with skin infections such as burn wounds.

“The results also help to deepen our understanding of molecular machines in general by showing that not all of them act by the same mechanisms and that differences in the chemical core of the molecule can result in very different biological actions,” she said.

Co-authors of the study are Rice graduate students Anna Reed and Aaron Wyderka, and lecturer Lawrence Alemany; former Rice graduate student Victor García‐López, now an assistant professor at Louisiana State University; Antonio Oliver of the Health Research Institute of the Balearic Islands and the Son Espases University Hospital, Palma; and George Tegos of Tower Health, West Reading, Pennsylvania. Tour is the T.T. and W.F. Chao Chair in Chemistry as well as a professor of computer science and of materials science and nanoengineering at Rice. 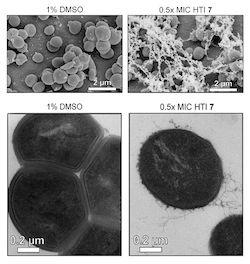