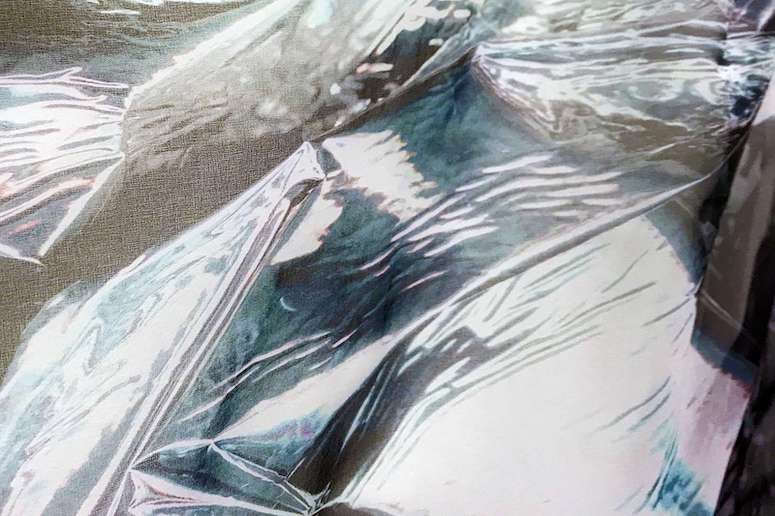 Conrad’s work also involves creative replication, taking material and repurposing it into something novel, then transforming it into yet another form or shape.

With her new work — just installed in the lobby at Rice’s BioScience Research Collaborative (BRC) last week — Conrad took deflated mylar birthday balloons, put them on a flatbed scanner and printed the resulting images in high resolution using archival ink on silk organza. She then layered and crumpled the fabric, adding a whole new dimension to the images printed on the silk.

“The ongoingness, the immortality of the hydra reminded me of my own work and my process,” said Conrad, who is also an associate professor in the University of Houston School of Art. She was commissioned by Rice’s Moody Center for the Arts, who invited guest curator Ylinka Barotto to oversee the project as part of the university’s public art program.

The commission draws from imagery obtained from the Robinson Lab, which is housed at the BRC. Exploring the visuals rendered from Robinson’s study of the millimeter-sized invertebrates — done in the pursuit of advancing the treatment of neurological disorders — Conrad’s piece welcomes visitors and allows for a practical and accessible visualization of complex scientific research.

Conrad’s work, “Hydras,” will be celebrated with an opening reception Saturday, Feb. 12 from 6-8 p.m. at the BRC. For more information, visit moody.rice.edu.