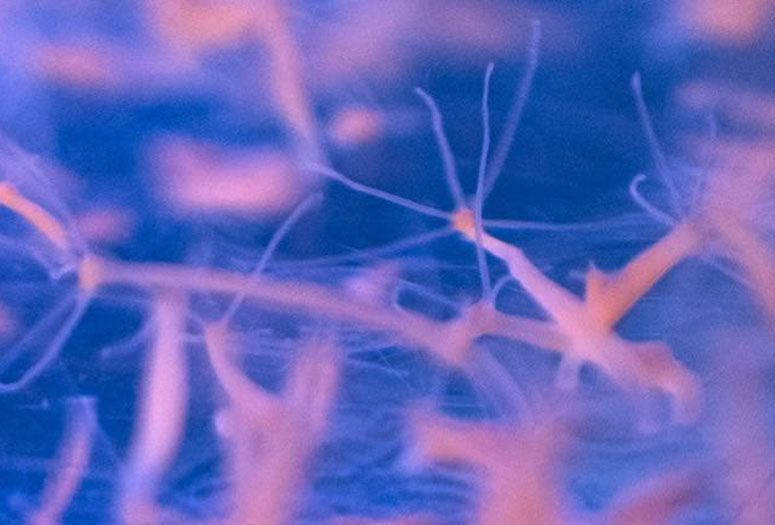 HOUSTON – (Aug. 2, 2021) – Even the simplest creatures seem extraordinarily complex when you look beneath the surface. Fortunately, hydra make that part easy.

Rice electrical and computer engineer Jacob Robinson and lead author and alumna Krishna Badhiwala of the university's Brown School of Engineering are taking advantage of the animal’s transparency to do the hard part, manipulating the small, remarkably resilient creatures in just about every possible way to learn how they sense touch.

Their comprehensive analysis of hydra in the open-access journal eLife, in collaboration with biologist Celina Juliano and graduate student Abby Primack of the University of California, Davis, is a small step toward understanding neural networks in all living creatures.

Hydra vulgaris, freshwater cnidarians that look like miniature jellyfish polyps, expand and contract as they navigate their environments, but can also be prompted to do so by giving them a poke. The Rice lab has developed highly specialized equipment over the last decade to do that, temporarily constraining the animals in the channel of a microfluidic device to capture simultaneous images and data that detail their muscular and neural responses.

There, hydra can be physically prodded with a controlled amount of force to make them contract. For the new study, the researchers genetically modified hydra to express a green fluorescent protein when the associated neurons are activated, and then removed sets of those neurons -- and even body parts -- to see how networks respond upon poking the animals.

Their goal was to build a model of how internal states and external stimuli shape the behavior of an organism with a highly dynamic neural architecture.

“We need to establish the fundamentals for how animals like hydra work, in terms of their neurobiology, so we can then begin to make comparisons to really diverse animals,” said Robinson, part of Rice’s Neuroengineering Initiative. “I could see in five or 10 years there’s going to be a lot of really interesting questions we can answer now that we’ve established some of the basics.”

Neurons in hydra are concentrated in the oral region (adjacent to the tentacles) and the aboral region (around the “foot”), but the researchers identified two distinct kinds of neurons -- “mechanically responsive” and previously discovered “contraction burst” neurons -- distributed throughout the bodies. That helped explain the different firing patterns they discovered, depending on whether hydra contract spontaneously or are mechanically triggered.

The researchers also found that both oral and aboral regions play a role in spontaneous contractions. The oral region, aka the hypostome, is more significant; because it appears to coordinate motor response, they learned that removing the hypostome entirely significantly reduced a hydra’s response to prodding.

The aboral, aka peduncle, region appears to contain a high concentration of motor neurons involved in contraction, evidenced by calcium networks that activate from the foot on up when triggered either by the hypostome or by prodding “headless” hydra.

Most interesting was evidence that when hydra had one network or the other removed or were literally cut in half, the remaining neurons picked up the slack to maintain at least rudimentary function and/or regenerate the lost pieces.

“When we started studying hydra, we wanted to understand as much as we could about how it works, its commonalities and differences when compared to other animals,” Robinson said. “One of the things we didn’t know about were the specific kinds of neural structures. Hydra in particular have a distributed nerve network, and we wanted to know whether particular regions of the animal process information in a centralized way, or if all the neurons are kind of the same.”

It turned out the oral and aboral networks are fairly distinct in the way they control different aspects of hydra. “But it seems there’s some redundancy and sensory information processing, which we also see in other animals," he said. "This idea of redundancy is really important for animal survival, so we see it pop up lots of times wherever we look.”

While the radial nervous systems in hydra are fundamentally different from networks in bilateral creatures like mammals, there are similarities in the way all such systems share the workload when they must.

“I like to think about it this way: Let's look at all the crazy things nervous systems can do that have evolved from the same starting point,” Robinson said. “That may allow us to identify fundamental principles that are harder to find in rodents and humans, where they might be obscured by other things that we've developed over time.”

Robinson said neuroscientists who are looking beyond traditional small model organisms -- rodents, worms, zebrafish and fruit flies -- will be most interested in the hydra results. “There’s a recognition that we really need to diversify our choices of the animals that we study,” he said.

There are also implications for science initiatives beyond the animal kingdom. “That this particular type of nervous system can completely recover makes me think there are principals that relate to what makes a network stable,” Robinson said. “These could be applied to stabilize power grids or the internet, inspired by nature.”

Robinson is an associate professor of electrical and computer engineering and of bioengineering at Rice. Juliano is an assistant professor of molecular and cellular biology at UC Davis. The National Science Foundation (1829158, 1250104), the National Institutes of Health (R21AG067034) and the Keck Center of the Gulf Coast Consortia supported the research.

Read the open-access paper at: https://elifesciences.org/articles/64108

https://news-network.rice.edu/news/files/2021/07/0726_HYDRA-1-WEB.jpg
CAPTION: Researchers at Rice University and the University of California, Davis, identified redundant neural networks in jellyfish-like, freshwater hydra by altering and then capturing them in microfluidic devices to be poked and prodded. The work is a step toward modeling how internal states and external stimuli shape the behavior of an organism with a highly dynamic neural architecture. (Credit: Jeff Fitlow/Rice University)