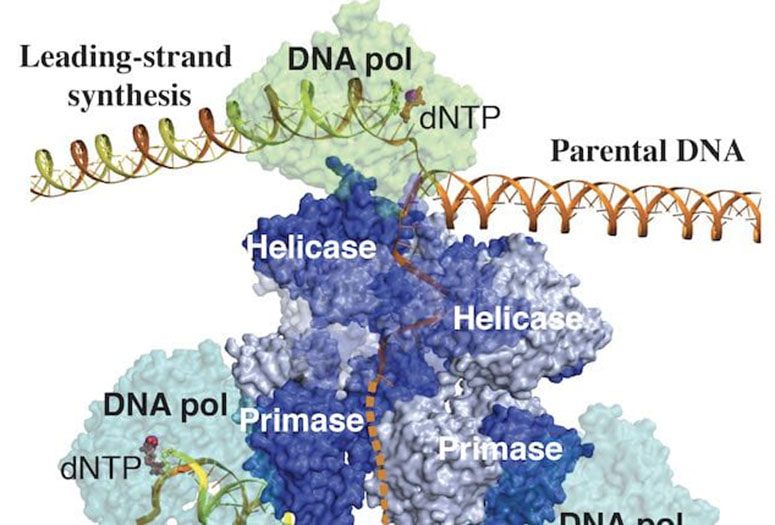 The poor bacteriophages in Yang Gao’s lab are about to have a lot of bad days.

That’s all to the good for the structural biologist, who has received a prestigious Maximizing Investigators’ Research Award for New and Early Stage Investigators from the National Institutes of Health to make the lives of viruses harder so ours can be better.

The five-year grant for $1.9 million, administered by the National Institute of General Medical Sciences, will help Gao and his group detail the mechanisms of proteins that produce copies of genomic DNA, and what can go awry when they’re either subjected to stress or face other barriers.

A better understanding of the structural framework of DNA replication, stress response and repair at the atomic level could help find new ways to target processes involved in a host of diseases, including cancer.

“We’re interested in the basic question of how DNA is replicated,” said Gao, an assistant professor of biosciences who joined Rice in 2019 with the backing of a grant from the Cancer Prevention and Research Institute of Texas. “We’ve known for a long time that DNA is a fragile molecule and subject to many different assaults, environmental and physiological, like ultraviolet from sunlight and oxidative species.

“So many things damage DNA,” he said. “Despite that, DNA replication has to keep on going, even if there are errors, with an enzyme called DNA polymerase and a motor called the helicase.”

These are part of the replisome, a complex chain of proteins that carry out DNA replication and help repair DNA on the fly. Part of their normal function is to catch and fix coding errors. “When they see something bad they call for help, either before or after replication,” Gao said. “But how that works is still unknown, and we want to figure it out.”

The lab will start with the T7 bacteriophage, a virus whose infection mechanism in Escherichia coli bacteria is a good analog for what happens in humans.

“During my postdoc, we solved the first structure of T7 replisome to show how T7 comes together at a replication site,” he said. “We’ve continued that work at Rice, and we’re using the system to explore how it deals with different damages.”

The lab will then study the structure of mitochondria, the “power plants” inside cells, to see how DNA mutations produced there could lead to genetic diseases. “These two systems are mechanistically similar, and because we have experience with T7 and we’ve recently established a mitochondrial hub, we’re in a good position to start this investigation,” Gao said.

He noted he will continue to collaborate with Rice physicist Peter Wolynes and his group, which produces models that advance the theory of DNA replication. The lab also plans to make use of a new transmission electron microscope pegged for Rice’s BioScience Research Collaborative.