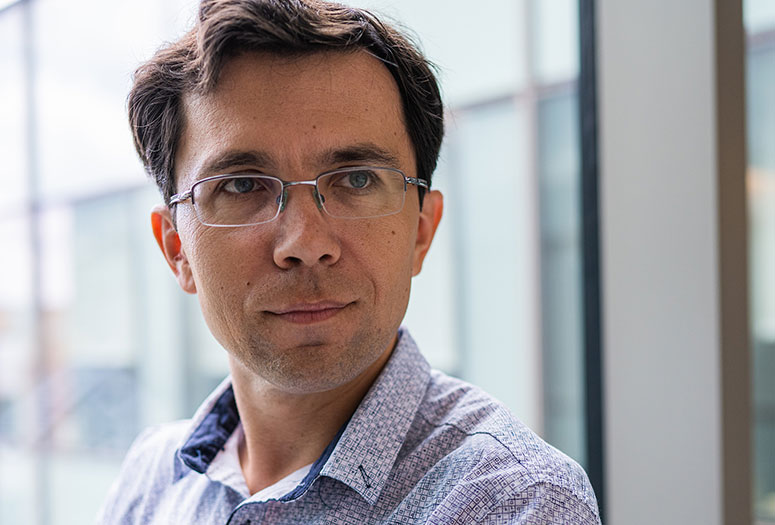 Despite the name, quantum spin liquids are solid materials in which quantum entanglement and the geometric arrangement of atoms frustrate the natural tendency of electrons to magnetically order themselves in relation to one another. The geometric frustration in a quantum spin liquid is so severe that electrons fluctuate between quantum magnetic states no matter how cold they become.

Theoretical physicists routinely work with quantum mechanical models that manifest quantum spin liquids, but finding convincing evidence that they exist in actual physical materials has been a decadeslong challenge. While a number of 2D or 3D materials have been proposed as possible quantum spin liquids, Rice University physicist Andriy Nevidomskyy said there’s no established consensus among physicists that any of them qualify.

Nevidomskyy is hoping that will change based on the computational sleuthing he and colleagues from Rice, Florida State University and the Max Planck Institute for Physics of Complex Systems in Dresden, Germany, published this month in the open-access journal npj Quantum Materials.

The inherent property of electrons that leads to magnetism is spin. Each electron behaves like a tiny bar magnet with a north and south pole, and when measured, individual electron spins always point up or down. In most everyday materials, spins point up or down at random. But electrons are antisocial by nature, and this can cause them to arrange their spins in relation to their neighbors in some circumstances. In magnets, for example, spins are collectively arranged in the same direction, and in antiferromagnets they are arranged in an up-down, up-down pattern.

At very low temperatures, quantum effects become more prominent, and this causes electrons to arrange their spins collectively in most materials, even those where spins would point in random directions at room temperature. Quantum spin liquids are a counterexample where spins do not point in a definite direction — even up or down — no matter how cold the material becomes.

“A quantum spin liquid, by its very nature, is an example of a fractionalized state of matter,” said Nevidomskyy, associate professor of physics and astronomy and a member of both the Rice Quantum Initiative and the Rice Center for Quantum Materials ( RCQM). “The individual excitations are not spin flips from up to down or vice versa. They’re these bizarre, delocalized objects that carry half of one spin degree of freedom. It's like half of a spin.”

Nevidomskyy was part of the 2019 study led by Rice experimental physicist Pengcheng Dai that found the first evidence that cerium zirconium pyrochlore was a quantum spin liquid. The team's samples were the first of their kind: Pyrochlores because of their 2-to-2-to-7 ratio of cerium, zirconium and oxygen, and single crystals because the atoms inside were arranged in a continuous, unbroken lattice. Inelastic neutron scattering experiments by Dai and colleagues revealed a quantum spin liquid hallmark , a continuum of spin excitations measured at temperatures as low as 35 millikelvin.

“You could argue that they found the suspect and charged him with the crime,” Nevidomskyy said. “Our job in this new study was to prove to the jury that the suspect is guilty.”

“The framework for this theory was known, but the exact parameters, of which there are at least four, were not,” Nevidomskyy said. “In different compounds, these parameters could have different values. Our goal was to find those values for cerium pyrochlore and determine whether they describe a quantum spin liquid.

“It would be like a ballistics expert who is using Newton's second law to calculate a bullet’s trajectory,” he said. “Newton’s law is known, but it only has predictive power if you supply the initial conditions like the bullet’s mass and initial velocity. Those initial conditions are analogous to these parameters. We had to reverse engineer, or sleuth out, ‘What are those initial conditions inside this cerium material?’ and, ‘Does that match the prediction of this quantum spin liquid?’”

To build a convincing case, the researchers tested the model against thermodynamic, neutron-scattering and magnetization results from previously published experimental studies of cerium zirconium pyrochlore.

“If you just have one piece of evidence, you might inadvertently find several models that still fit the description,” Nevidomskyy said. “We actually matched not one, but three different pieces of evidence. So, a single candidate had to match all three experiments.”

Some studies have implicated the same type of quantum magnetic fluctuations that arise in quantum spin liquids as a possible cause for unconventional superconductivity . But Nevidomskyy said the computational findings are primarily of fundamental interest to physicists.

“This satisfies our innate desire, as physicists, to find out how nature works,” he said. “There’s no application I know of that might benefit. It's not immediately tied to quantum computing, although ideas exist for using fractionalized excitations as a platform for logical qubits.”

He said one particularly interesting point for physicists is the deep connection between quantum spin liquids and the experimental realization of magnetic monopoles , theoretical particles whose potential existence is still debated by cosmologists and high-energy physicists.

“When people talk about fractionalization, what they mean is the system behaves as if a physical particle, like an electron, splits into two halves that kind of wander around and then recombine somewhere later,” Nevidomskyy said. “And in pyrochlore magnets such as the one we studied, these wandering objects moreover behave like quantum magnetic monopoles.”

Magnetic monopoles can be visualized as isolated magnetic poles like either the upward or downward facing pole of a single electron.

“Of course, in classical physics one can never isolate just one end of a bar magnet,” he said. “The north and south monopoles always come in pairs. But in quantum physics, magnetic monopoles can hypothetically exist, and quantum theorists constructed these almost 100 years ago to explore fundamental questions about quantum mechanics.

“As far as we know, magnetic monopoles don't exist in a raw form in our universe,” Nevidomskyy said. “But it turns out that a fancy version of monopoles does exist in these cerium pyrochlore quantum spin liquids. A single spin flip creates two fractionalized quasiparticles called spinons that behave like monopoles and wander around the crystal lattice.”

The study also found evidence that monopole-like spinons were created in an unusual way in cerium zirconium pyrochlore. Due to the tetrahedral arrangement of magnetic atoms in the pyrochlore, the study suggests they develop octupolar magnetic moments — spin-like magnetic quasiparticles with eight poles — at low temperatures. The research showed spinons in the material were produced from both these octupolar sources and more conventional, dipolar spin moments.

“Our modeling established the exact proportions of interactions of these two components with one another,” Nevidomskyy said. “It opens a new chapter in the theoretical understanding of not only the cerium pyrochlore materials but of octupolar quantum spin liquids in general.”

RCQM leverages global partnerships and the strengths of more than 20 Rice research groups to address questions related to quantum materials. RCQM is supported by Rice’s offices of the provost and the vice provost for research, the Wiess School of Natural Sciences, the Brown School of Engineering, the Smalley-Curl Institute and the departments of Physics and Astronomy, Electrical and Computer Engineering, and Materials Science and NanoEngineering.

https://news-network.rice.edu/news/files/2022/05/0509_LIQUID-Ce227-3Dsec-lg.jpg
CAPTION: A 3D representation of the spin-excitation continuum -- a possible hallmark of a quantum spin liquid -- observed in 2019 in a single crystal sample of cerium zirconium pyrochlore. (Image by Tong Chen/Rice University)