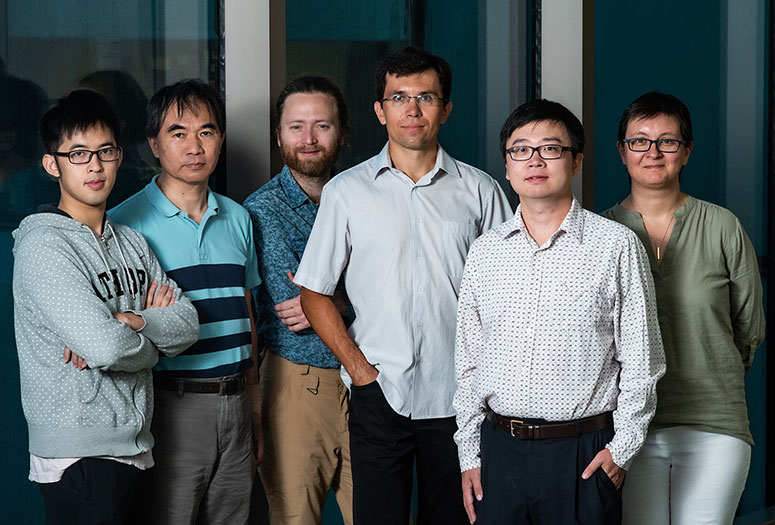 HOUSTON -- (July 15, 2019) -- There's no known way to prove a three-dimensional "quantum spin liquid" exists, so Rice University physicists and their collaborators did the next best thing: They showed their single crystals of cerium zirconium pyrochlore had the right stuff to qualify as the first possible 3D version of the long-sought state of matter.

Despite the name, a quantum spin liquid is a solid material in which the weird property of quantum mechanics -- entanglement -- ensures a liquidlike magnetic state.

In a paper this week in Nature Physics, researchers offered a host of experimental evidence -- including crucial neutron-scattering experiments at Oak Ridge National Laboratory (ORNL) and muon spin relaxation experiments at Switzerland's Paul Scherrer Institute (PSI) -- to support their case that cerium zirconium pyrochlore, in its single-crystal form, is the first material that qualifies as a 3D quantum spin liquid.

"A quantum spin liquid is something that scientists define based on what you don't see," said Rice's Pengcheng Dai , corresponding author of the study and a member of Rice's Center for Quantum Materials (RCQM). "You don't see long-range order in the arrangement of spins. You don't see disorder. And various other things. It's not this. It's not that. There's no conclusive positive identification."

The research team's samples are believed to be the first of their kind: Pyrochlores because of their 2-to-2-to-7 ratio of cerium, zirconium and oxygen, and single crystals because the atoms inside them are arranged in a continuous, unbroken lattice.

"We've done every experiment that we could think of on this compound," Dai said. "(Study co-author) Emilia Morosan 's group at Rice did heat capacity work to show that the material undergoes no phase transition down to 50 millikelvin. We did very careful crystallography to show there is no disorder in the crystal. We did muon spin relaxation experiments that demonstrated an absence of long-range magnetic order down to 20 millikelvin, and we did diffraction experiments that showed the sample has no oxygen vacancy or other known defects. Finally, we did inelastic neutron scattering that showed the presence of a spin-excitation continuum -- which may be a quantum spin liquid hallmark -- down to 35 millikelvin."

Despite the team's effort, Dai said it is impossible to definitively say cerium-zirconium 227 is a spin liquid, partly because physicists haven't yet agreed on what experimental proof is necessary to make the declaration, and partly because the definition of a quantum spin liquid is a state that exists at absolute zero temperature, an ideal beyond the reach of any experiment.

Quantum spin liquids are believed to occur in solid materials that are composed of magnetic atoms in particular crystalline arrangements. The inherent property of electrons that leads to magnetism is spin, and electron spins can only point up or down. In most materials, spins are shuffled at random like a deck of cards, but magnetic materials are different. In the magnets on refrigerators and inside MRI machines, spins sense their neighbors and arrange themselves collectively in one direction. Physicists call this “long-range ferromagnetic order,” and another important example of long-range magnetic order is antiferromagnetism, where spins collectively arrange in a repeating, up-down, up-down pattern.

"In a solid with a periodic arrangement of spins, if you know what a spin is doing over here, you can know what a spin is doing many, many repetitions away because of long-range order," said Rice theoretical physicist and study co-author Andriy Nevidomskyy , an associate professor of physics and astronomy and RCQM member. "In a liquid, on the other hand, there is no long-range order. If you look at two molecules of water a millimeter apart, for example, there is no correlation whatsoever. Nevertheless, due to their hydrogen-hydrogen bonds, they can still have an ordered arrangement at very short distances with nearby molecules, which would be an example of short-range order."

In 1973, Nobel laureate physicist Philip Anderson proposed the idea of quantum spin liquids based upon the realization that the geometric arrangement of atoms in some crystals could make it impossible for entangled spins to collectively orient themselves in stable arrangements.

As noted science writer Philip Ball aptly described in 2017, "Imagine an antiferromagnet -- in which adjacent spins prefer to be oppositely oriented -- on a triangular lattice. Each spin has two nearest neighbors in a triangle, but the antiparallel alignment cannot be satisfied for all of the trio. One possibility is that the spin lattice freezes into a disordered 'glassy' state, but Anderson showed that quantum mechanics allows the possibility of fluctuating spins even at absolute zero (temperature). This state is called a quantum spin liquid, and Anderson later suggested that it might be connected to high-temperature superconductivity."

The possibility that quantum spin liquids might explain high-temperature superconductivity spurred widespread interest among condensed matter physicists since the 1980s, and Nevidomskyy said interest further increased when it was "suggested that some examples of so-called topological quantum spin liquids may be amenable to building qubits" for quantum computing.

"But I believe part of the curiosity about quantum spin liquids is that it has resurfaced in many incarnations and theoretical proposals," he said. "And although we have theoretical models where we know, for a fact, that the result will be a spin liquid, finding an actual physical material that would fulfill those properties has, so far, proven very difficult. There is no consensus in the field, up to now, that any material -- 2D or 3D -- is a quantum spin liquid."

Morosan is a professor of physics and astronomy, chemistry, and materials science and nanoengineering at Rice and a member of RCQM.

RCQM leverages global partnerships and the strengths of more than 20 Rice research groups to address questions related to quantum materials. RCQM is supported by Rice's offices of the provost and the vice provost for research, the Wiess School of Natural Sciences, the Brown School of Engineering, the Smalley-Curl Institute and the departments of Physics and Astronomy, Electrical and Computer Engineering, and Materials Science and NanoEngineering.

Additional study co-authors include Chien-Lung Huang and Haoyu Hu of Rice; Kalyan Sasmal and Brian Maple, both of the University of California, San Diego; Devashibhai Adroja of the United Kingdom's Rutherford-Appleton Laboratory; Feng Ye, Huibo Cao, Gabriele Sala and Matthew Stone, all of the Neutron Scattering Division at ORNL; Christopher Baines and Joel Barker, both of PSI; Jae-Ho Chung of both Rice and Korea University, Seoul; Xianghan Xu of Rutgers; Manivannan Nallaiyan and Stefano Spagna, both of Quantum Designs Inc. in San Diego; and Gang Chen of both the University of Hong Kong and Fudan University, Shanghai.