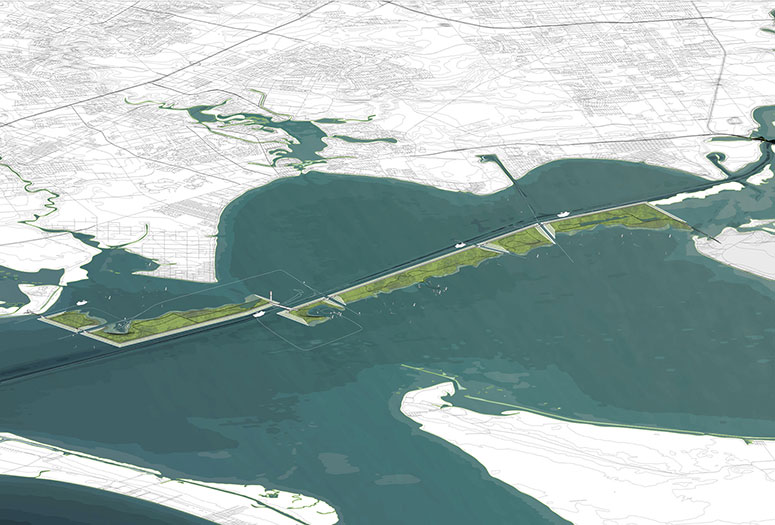 HOUSTON – (June 22, 2022) – Houston, Harris County, Port Houston and a local entrepreneur have chipped in for an engineering study of Galveston Bay Park, a chain of man-made islands that Rice University experts have proposed building as both a hurricane barrier and a 10,000-acre public park.

Rice’s Severe Storm Prediction, Education and Evacuation from Disasters (SSPEED) Center proposed the in-bay storm barrier in 2015 and the idea was fully realized in an award-winning design from architecture firm Rogers Partners in 2020. The county, port and city each contributed $250,000 toward the cost of a detailed engineering study of the park proposal, a critical step in preparing the project for initial environmental permitting. Entrepreneur Joe Swinbank contributed the remainder of the cost for the $1 million study.

“Passage of funding for this item represents a significant step forward for our region in support of the research at the Rice SSPEED Center,” said Houston Mayor Sylvester Turner. “The project is needed to inform critical investment to protect the Greater Houston region from the devastating effects of future storms in the Gulf of Mexico, along the Texas Coast and within Galveston Bay.”

SSPEED Center Director Phil Bedient said, “Galveston Bay Park works in concert with the coastal spine , can be constructed without federal funds and the barrier portion of the project could be complete by the early 2030s, providing 25-foot storm surge protection for both the industrial complexes and densely populated areas of west and northwest Galveston Bay. We’re grateful Port Houston, City of Houston, Harris County and Joe Swinbank agreed to invest in a more detailed analysis of the plan.”

“I am a longtime supporter of what I call the ‘all of the above’ approach when it comes to coastal storm protection plans, which would potentially include the Galveston Bay Park Plan,” said Harris County Precinct 2 Commissioner Adrian Garcia. “Southeast Texas has waited far too long already for action to guard against the dangers from storms that come across our coast from the Gulf of Mexico. I am grateful to all of our partners at the City of Houston, Port Houston and Rice University’s SSPEED Center for their financial and intellectual efforts to study how to keep us safe from a devastating tropical weather event.”

Bedient said 25-foot storm surge flooding of petrochemical refineries and densely populated residential communities on the west side of Galveston Bay is a realistic hurricane scenario SSPEED’s researchers have studied extensively using computer models. Climate change is expected to increase the frequency of major hurricanes that are classified as Category 3, 4 and 5, and Bedient said the Galveston Bay Park barrier will work in concert with the proposed coastal barrier, or “Ike Dike,” to protect against these large storms.

Houston City Council Member David W. Robinson, said, “The Galveston Bay Park Plan has been lauded as a potential complement to enhance the effectiveness of the coastal spine project while protecting critical infrastructure, regional industry and our port facility. The project would also increase the protection of Houstonians, our neighbors throughout the region and the essential workers who support and sustain our communities.”

Port Houston Chairman Ric Campo said, “Port Houston remains steadfast in its commitment to serving in the best interests of the community and the region it serves. We are optimistic this project will help protect lives, Texas’ economy and the environment.”

SSPEED computer models have shown a Category 4 hurricane with 132 mph winds and a smaller footprint than 2008’s Hurricane Ike could cause catastrophic flooding if it made landfall at San Luis Pass on the southern end of Galveston Island. In that scenario, up to 26 feet of floodwater would inundate areas around the ship channel, extending well inside Loop 610. Up to 20 feet of flooding would occur in La Porte, Seabrook, Bayview, Clear Lake, Webster and portions of Friendswood west of Interstate 45. If Galveston Bay Park is built, SSPEED’s models show flooding in such a scenario would be limited to about 7 feet along the ship channel and 6 feet in coastal communities.

SSPEED Center Co-director Jim Blackburn said, “The Galveston Bay Park project was created from the necessity to achieve a higher level of protection than was being provided by the coastal spine project for the upper portion of the bay. We now can protect the ship channel and the eastern shore of Harris County from the big storms of the future. That is crucial to our long-term economic and ecologic future.”

https://news-network.rice.edu/news/files/2022/05/0601_BAYPARK-Cat4-nSLRb-lg.jpg
CAPTION: Maps from computer models that predict the level of storm flooding, in feet, at locations in and around Galveston Bay both with and without the Galveston Bay Park storm barrier during a Category 4 hurricane with 132 mph winds making landfall at San Luis Pass on the south end of Galveston Island. The figures in this model were generated using sea-level data from 2015. (Image courtesy of SSPEED Center/Rice University)

https://news-network.rice.edu/news/files/2022/05/0601_BAYPARK-Cat4-wSLRb-lg.jpg
CAPTION: Maps from computer models that predict the level of storm flooding, in feet, at locations in and around Galveston Bay both with and without the Galveston Bay Park storm barrier during a Category 4 hurricane with 132 mph winds making landfall at San Luis Pass on the south end of Galveston Island. The figures in this model were generated using estimated values for sea level in 2050 based on increases due to climate change. (Image courtesy of SSPEED Center/Rice University)

https://news-network.rice.edu/news/files/2022/06/0622_BAYPARK-Cat4-nSLRwCS-lg.jpg
CAPTION: Computer-model generated maps predicting storm flooding at locations in and around Galveston Bay from a Category 4 hurricane with 132 mph winds making landfall at San Luis Pass on the south end of Galveston Island. The same storm is depicted without protection from the coastal spine or Galveston Bay Park storm barriers (left) and with the protection of both barriers (right). Colors indicating flood depth are equivalent, but flood depth figures are in feet on the left and in meters on the right. (Image courtesy of SSPEED Center/Rice University)

https://news-network.rice.edu/news/files/2022/05/0601_BAYPARK-fig1-lg.jpg
CAPTION: An artist's illustration of Galveston Bay Park, a chain of islands that would serve double duty as a hurricane barrier and a 10,000-acre state park. (Image courtesy of Rogers Partners)