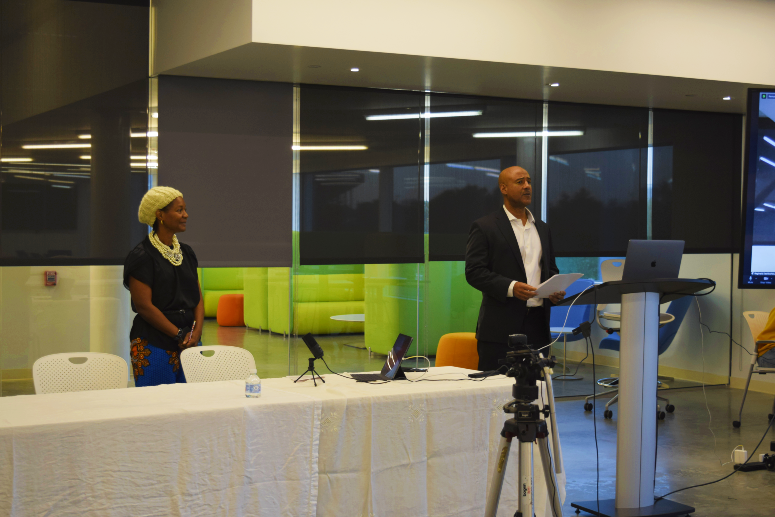 Provost Reginald DesRoches delivered the welcome address Nov. 19 to all attendees — both virtual and in person at the Moody Center for the Arts — of “In the Path of Disaster(s),” a conference focused on narratives around natural catastrophes in the Americas and Circum-Caribbean. The two-day event was organized by Jacqueline Couti, the Laurence H. Favrot Associate Professor of French and Francophone Studies, and Professor of Caribbean and Media Studies Luis Duno-Gottberg.

The conference boasted an array of both international attendees and panelists, including Paris-based artist Kapwani Kiwanga, whose solo exhibition is currently showing at the Moody. She spoke about her work in French alongside architect Léopold Lambert and graphic novelist Jessica Oublié in one of several roundtable discussions.

Rarely do I see a conference that brings together experts, engineers, scientists, social scientists, artists — such an impressive gathering of people — to talk about natural disasters.

The unique conference was designed to bring artists and activists together with scientists and scholars in dialogs that spanned topics ranging from creating art in the aftermath of natural disasters to these catastrophes’ long-term effects on people’s physical health.

“We’re certainly living in the path of disaster,” said Jim Blackburn, environmental lawyer and co-director of Rice’s Severe Storm Prevention, Education and Evacuation from Disaster Center, whose presentation on the first day of the conference began with a look at the future of the Texas Gulf Coast and closed with poetry from his recent collaboration with artist Isabelle Scurry Chapman.

“We have always thought of ourselves as being able to control nature, and I think that is probably the biggest fallacy that we have,” Blackburn said. “I think we're experiencing the failure to control nature and the consequences of it — and I think in the future, we will see our economy and ecology come together and what will be known as a circular economy.”

“Thanks for organizing such an incredibly important gathering of the minds to discuss what may be, to me, one of the most important issues of our time: the increasing frequency and impact of natural disasters and what that means for the people in these regions,” said DesRoches, who will assume the role of Rice University president in July 2022.

“Rarely do I see a conference that brings together experts, engineers, scientists, social scientists, artists — such an impressive gathering of people — to talk about natural disasters,” DesRoches said.

The conference was sponsored by Rice University’s Department of Modern and Classical Literatures and Cultures, Center for African and African American Studies, Center for Environmental Studies, School of Humanities, Humanities Research Center, and the Mellon Foundation-sponsored Diluvial Houston grant and by Loyola University, New Orleans and Creative Ventures.