‘The Sand Recalls the Moon’s Shadow’ runs through Dec. 19 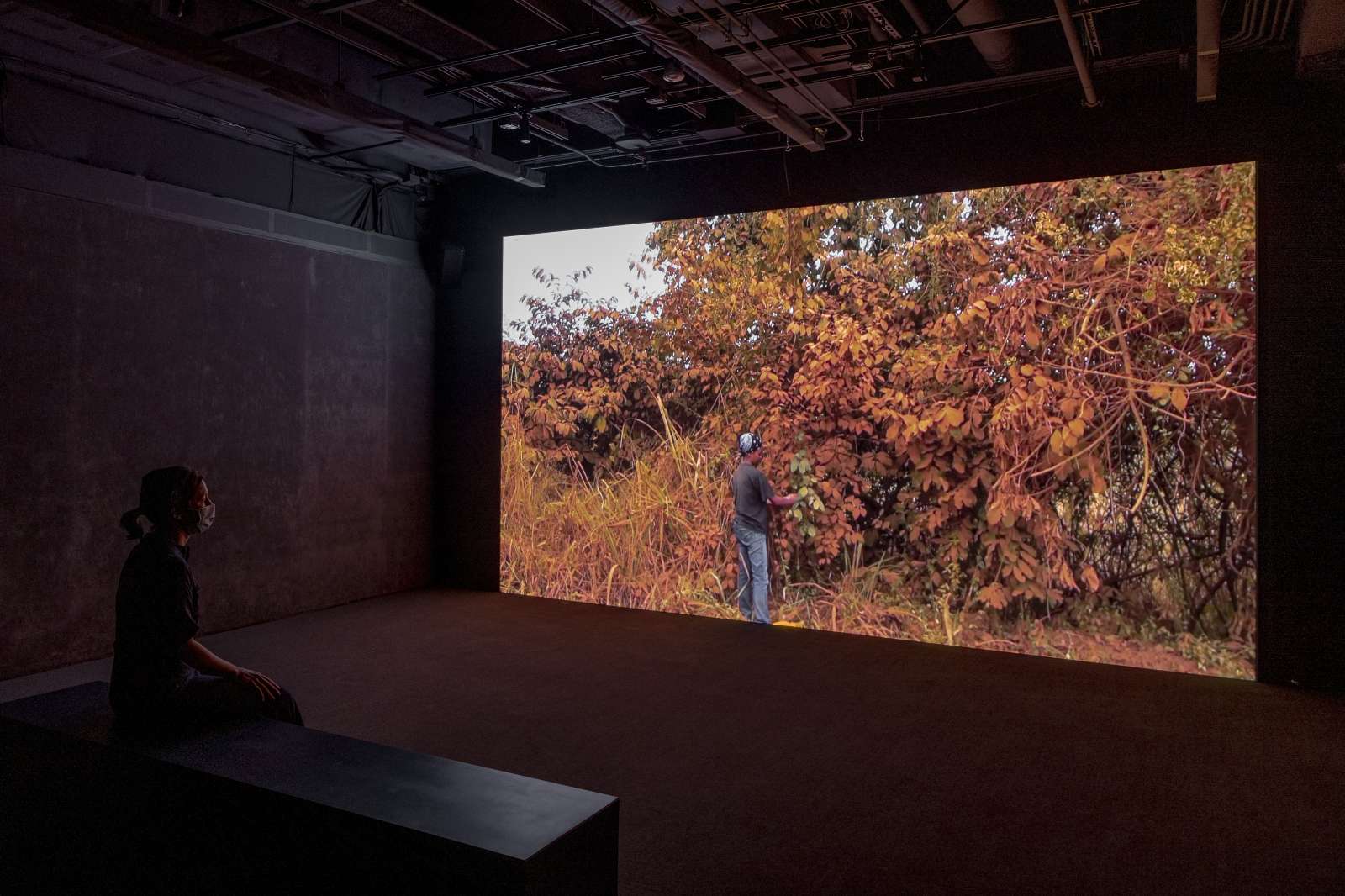 One gallery at Rice’s Moody Center for the Arts has been converted into a desert landscape made from approximately 50 tons of fine silica sand, while another is centered around a giant structure draped with wooly-looking sisal that nearly reaches the gallery’s lofty ceiling.

In her new exhibition “The Sand Recalls the Moon’s Shadow,” Kapwani Kiwanga employs site-specific installations that encourage guests to consider the ways in which the earth’s natural materials can bear witness to the world.

With a background in anthropology, the Canadian-born Kiwanga is presenting her work for the first time in Houston. Befitting Rice’s own interdisciplinary atmosphere, Kiwanga’s artistic practice is intensely research-based and draws from years of studying comparative religion and the social sciences. Her art is deeply informed by place and often features performative aspects, as seen in Kiwanga’s 2012 video “Vumbi.”

Playing on a loop in the Moody’s media gallery, the 31-minute “Vumbi” shows Kiwanga standing on a roadside in rural Tanzania, methodically cleaning the leaves of a tree as she works to remove the country’s famous red dust from its greenery. Cars periodically pass and kick up more dust, which settles right back onto the leaves, while Kiwanga continues her process unbothered and unabated. One is reminded of the untold and countless tales of such toil over time, in human and natural processes alike.

“It’s almost absurdist, as it will never be completed,” said Ylinka Barotto, associate curator at the Moody. “But Kiwanga was interested in thinking about how small gestures like this can — if done collectively — have an impact on the environment, in fact.”

In “Dune,” Kiwanga’s site-specific installation in the Brown Foundation Gallery, those 50 tons of silica sand from Central Texas ask the audience to consider the impact these small grains have had on the environment in another collective form: as a medium for hydraulic fracturing, better known as fracking, a method of oil and natural gas extraction that began here commercially in the 1950s. By 2020, Texas accounted for 43% of the nation's crude oil production and 26% of its natural gas production due in part to increased production generated by fracking.

“The idea is to think about natural resources and the history, the economy and the political implications of this practice,” Barotto said. “It’s a very minimal gesture — thinking about what the sand can become, how this seemingly simple material can in fact be used in other processes by humans and how our human action intervenes in the environment.”

Lenses made from that same silica sand were fabricated in collaboration with glassmaker Justin Ginsberg, assistant professor of art and art history at the University of Texas at Arlington. Positioned at seemingly random intervals in the gallery across the broad expanse of “Dune,” the lenses encourage visitors to consider the way they look at such simple and often-overlooked materials as sand.

In the Central Gallery, “Maya-Bantu” features another common natural material in Tanzania: sisal, the nation’s oldest commercial cash crop. Sisal production in Tanzania peaked in 1964, three years after the country gained its independence, but decreased rapidly following government nationalization of sisal farms. Today, the country has reinvested in the crop, used to make everything from ropes to rugs, and Tanzania is currently the world’s second-largest producer after Brazil.

“Kiwanga became interested in it when she visited Tanzania around 2012 and saw these farms where sisal is hung to dry in the sun. In the process of being decorticated from its original form as a plant, it becomes this,” Barotto said, referring to the way the sun-bleached material has been fluffed out for “Maya-Bantu” and delicately hung in a multitude of layers that stretch up toward the ceiling.

For months during the exhibition’s installation, Barotto worked with the Paris-based Kiwanga over FaceTime and WhatsApp across a seven-hour time difference, often several times a day. A team of Rice students also pitched in behind the scenes: Rae Atkinson, Master of Architecture student, helped design the exhibition; Baker College junior Rebecca González-Van Wart provided Spanish translations of the didactic texts on the gallery walls; and Julia Fisher '21 provided curatorial support.

The dedication to creating these intricate site-specific installations for the Moody shows in the final results. “Dune” and “Maya-Bantu” may be minimal gestures, but they immediately engage the audience with their grand scale and scope.

On Oct. 12 at noon, Kiwanga will talk sisal with one of the world’s leading experts on the material: Hanan Sabea, professor of anthropology at the American University in Cairo, whose research examines the dynamics of land and labor on plantations in colonial and postcolonial Africa, state-subject relations and the production of histories and memories. This virtual Artist-in-Dialogue event, hosted by the Moody, is free and open to the public, though registration is required.

Later this semester, two events in the Moody’s Dimensions Variable series will feature Houston-based artists responding to Kiwanga’s exhibition. On Oct. 27 at 6:30 p.m., award-winning singer/songwriter, researcher and educator Lisa E. Harris will perform “Import.” On Nov. 5 from 5:30-8 p.m., 2019 Jerome Hill Fellow and choreographer Jasmine Hearn will perform an original dance commission. Both evenings’ performances are free and open to the public.

“There’s a lot of excitement about these performances,” Weaver said. “Lisa and Jasmine will enable visitors to experience how sound and movement can amplify the various themes inherent in the work. Each performer will offer audiences the opportunity to experience, engage with, and enjoy the exhibition in a unique way.”

“The Moody is honored to present Kapwani Kiwanga’s work in Houston for the first time. We hope visitors will get to know her practice through both the exhibition and the associated public programs, in engaging and meaningful ways,” Weaver said.