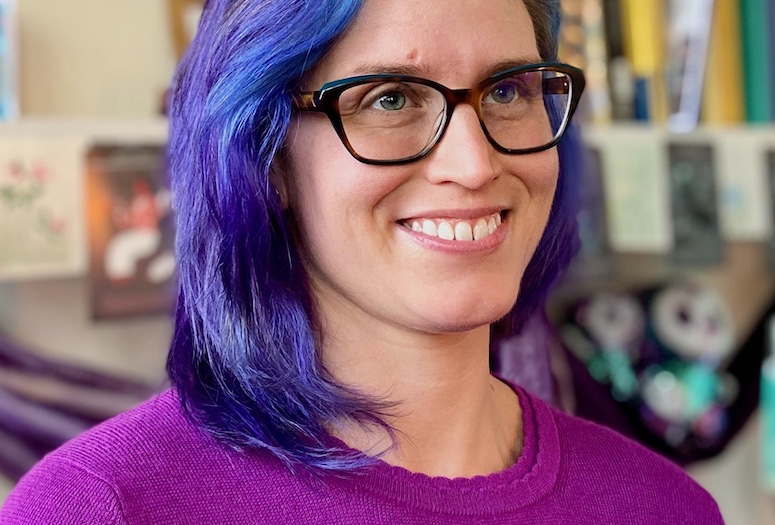 CAREER Awards, among the most competitive offered by the NSF, are typically given to fewer than 400 young scientists and engineers each year across all disciplines. According to the agency, they support “early career faculty who have the potential to serve as academic role models in research and education and to lead advances in the mission of their department or organization.”

The five-year grant for $435,000, administered by the Division of Mathematical Sciences, will support her ongoing exploration of mathematical structures known as contact and symplectic manifolds, which allow for the description of such simple and complex physical systems as springs, planetary motion and wave propagation.

“In order to describe how the position and momentum of a particle (or planet) evolve over time, one is led to the specialized notions of Reeb and Hamiltonian vector fields on manifolds,” Nelson explained. “A weather chart indicating the wind direction and strength at given points on the Earth’s surface is an example of a vector field on a manifold. Understanding the dynamics of these vector fields more generally led to the development of invariants of contact and symplectic manifolds.

“Of particular interest are closed orbits, which are paths flowing along the vector field that return to their starting point,” she said. “The study of closed orbits can be used to measure warping, voids and other spatial properties of the space of configurations of a dynamical system. For example, the possible elliptic orbits of a single planet under the sun’s gravitational pull are perturbed by the influence of other planets in our solar system. This variance from elliptic motion can be described in terms of a specific symplectic structure.”

By developing foundations and applications of these invariants, Nelson hopes to illuminate the interconnected natures of dynamics, embeddings, knot theory, geometry and topology.

“My field has applications, for example, to low-energy space travel, finding trajectories for satellites to move through space that may not be time-efficient, but are energy-efficient,” said Nelson, an assistant professor of mathematics who joined Rice in 2018.

“Another part of my grant is to run undergraduate research programs over the summer, which incorporate my postdoc and graduate students and give everyone a more holistic view of research,” she said. “Mathematicians haven’t done the best job of getting undergraduates involved in research, making it harder for students to stay motivated to pursue a Ph.D. One of my goals is to also provide students training in writing mathematics manuscripts and getting their work published.”

The funds will also support Nelson’s collaboration with Rice colleagues Danielle King and Mikki Hebl, both faculty members in the Department of Psychological Sciences, and graduate student Elisa Fattoracci.

They are conducting two national studies on anti-racism in academic advising in STEM fields to examine the effects of advisers' practices on Black, Indigenous, Hispanic and Asian Ph.D. students, including their psychological experiences and outcomes. Their studies will also offer detailed, actionable practices and behaviors for improving the training and mentoring of underrepresented students.

“I had previously started the mathematics department’s Diversity, Equity and Inclusion committee when I arrived because among other issues, there weren’t women or faculty of color being adequately represented in seminars or colloquium,” Nelson said. “This is a common issue, and there was additional work to be done to improve the climate for women and minorities within the department.

“King and I knew each other from women’s faculty lunches our first year,” she said. “We had discussed social identity, stigmatization confronting and resilience programming which could help increase the access and success of underrepresented students in mathematics.” These discussions led to an invitation from King and Hebl to jointly (and successfully) apply for a Race and Anti-Racism Research Fund grant. 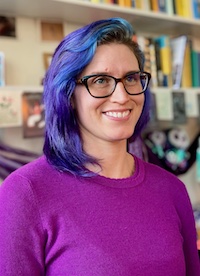 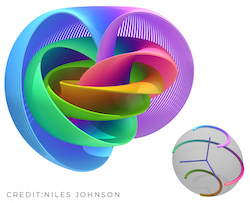 Rice University mathematician Jo Nelson, the winner of a National Science Foundation CAREER Award, uses this visualization of the Hopf fibration to realize higher dimensional manifolds. This illustration shows how the 3D sphere can be parametrized by a collection of circles over a 2D sphere. These circles are also examples of trajectories of a Reeb vector field on a contact manifold. (Credit: Niles Johnson)

Read the abstract at https://www.nsf.gov/awardsearch/showAward?AWD_ID=2142694&HistoricalAwards=false.