Nanoparticles make it easier to turn light into solvated electrons 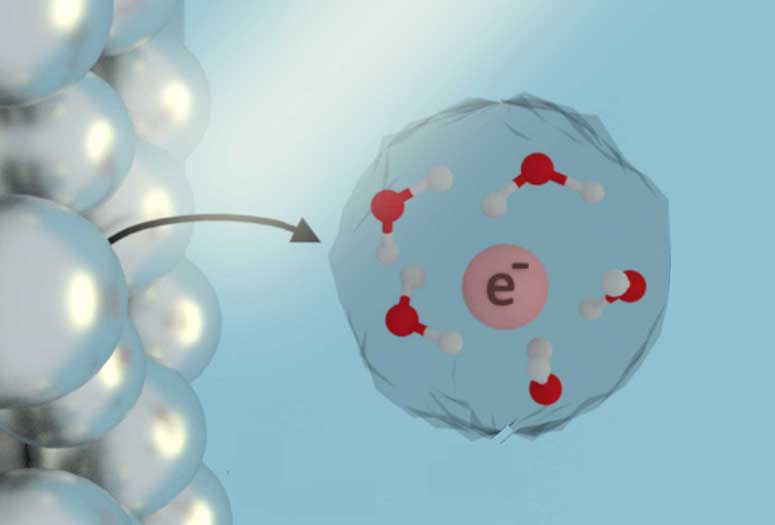 There are many ways to initiate chemical reactions in liquids, but placing free electrons directly into water, ammonia and other liquid solutions is especially attractive for green chemistry because solvated electrons are inherently clean, leaving behind no side products after they react.

In theory, solvated electrons could be used to safely and sustainably break down carbon dioxide or chemical pollutants in contaminated water, but it has been impractical to find out because they’ve been difficult and expensive to make in pure form.

That could change thanks to new research from chemists at Rice University, Stanford University and the University of Texas at Austin. In a published study in the Proceedings of the National Academy of Sciences, researchers from the Center for Adapting Flaws into Features (CAFF) uncovered the long-sought mechanism of a well-known but poorly understood process that produces solvated electrons via interactions between light and metal.

When light strikes a metal nanoparticle — or nanoscale imperfections on a larger metal surface — it can excite waves of electrons called plasmons. If the frequency of neighboring plasmons match, they can also resonate and reinforce one another. While prior research had suggested plasmonic resonance could produce solvated electrons, the researchers from CAFF — a center for chemical innovation funded by the National Science Foundation — are the first to explicitly and quantitatively demonstrate the process.

“Given the long history of the field, the challenge was both proving the existence of solvated electrons and then also linking their generation to the plasmon resonance,” said Rice’s Stephan Link, a co-corresponding author of the paper. “It really required teamwork and expertise from several research groups.”

“Making solvated electrons in high quantities is very challenging,” said co-corresponding author Sean Roberts of UT Austin. “Our results show quantitatively how nanostructuring of electrode surfaces can really boost the rate with which they generate solvated electrons. That could potentially open up new ways of driving chemical reactions.”

Solvated electrons — essentially freely floating electrons in a solution like water — could potentially react with carbon dioxide, turning it into other useful molecules, including fuels, in a net-carbon-neutral way. These electrons could also help reduce greenhouse gas emissions by replacing the fossil-fuel-heavy industrial process for making ammonia-based fertilizers with a greener alternative. For the treatment of contaminated water, they could be used to break down chemical pollutants such as nitrates, organic chlorides, dyes and aromatic molecules.

“A key challenge remains,” said CAFF director and study co-author Christy Landes of Rice. “The silver nanoparticles in our experiments were arranged at random, mimicking the tiny imperfections one might find on the surface of a flawed material. The next step is optimization. We hope to enhance solvated electron generation by several orders of magnitude by translating our findings to materials with ordered arrays of coupled plasmons with specific resonance energies.”

Roberts is an associate professor of chemistry at UT Austin. Link is Rice’s Charles W. Duncan Jr.-Welch Professor of Chemistry, and Landes is Rice’s Kenneth S. Pitzer-Schlumberger Chair in Chemistry. The study’s other co-corresponding authors are Jennifer Dionne, associate professor of materials science and engineering at Stanford, and Peter Rossky, Rice’s Harry C. and Olga K. Wiess Chair in Natural Sciences and a professor both of chemistry and of chemical and biomolecular engineering.

The research was supported by an NSF grant (2124983), CAFF and the Robert A. Welch Foundation.

https://news-network.rice.edu/news/files/2023/01/0117_SOLVATED-main-lg.jpg
CAPTION: When scientists shine low-intensity near-ultraviolet light on metal nanoparticles, electrons in the nanoparticles oscillate. This oscillation, referred to as a plasmon, can give the electrons enough energy to emit into the surrounding solution. (Credit: Rice University)