Inner ear has a need for speed

New study uncovers how a unique, fast synapse keeps us from falling 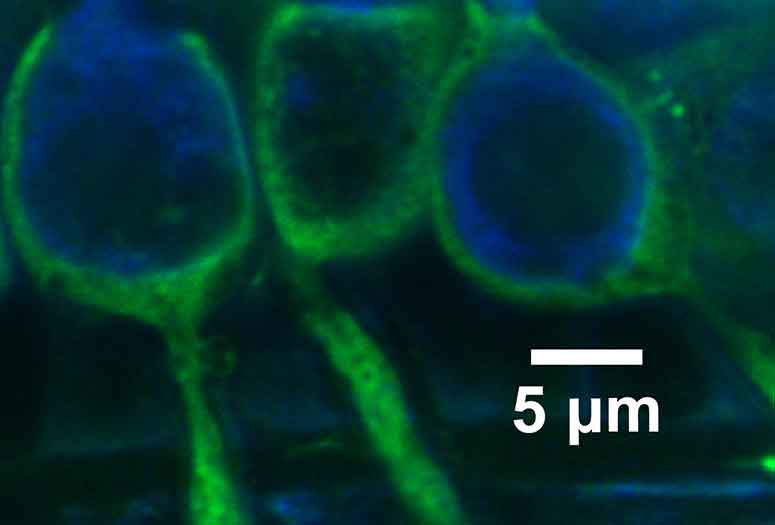 The sensory organs that allow us to walk, dance and turn our heads without dizziness or loss of balance contain specialized synapses that process signals faster than any other in the human body.

In a discovery more than 15 years in the making, a small group of neuroscientists, physicists and engineers from several institutions has unlocked the mechanism of the synapses, paving the way for research that could improve treatments for vertigo and balance disorders that affect as many as 1 in 3 Americans over age 40.

The new study in the Proceedings of the National Academy of Sciences describes the workings of “vestibular hair cell-calyx synapses,” which are found in organs of the innermost ear that sense head position and movements in different directions.

Synapses are biological junctions where neurons can relay information to one another and other parts of the body. The human body contains hundreds of trillions of synapses, and almost all of them share information via quantal transmission, a form of chemical signaling via neurotransmitters that requires at least 0.5 milliseconds to send information across a synapse.

Prior experiments had shown a faster, “nonquantal” form of transmission occurs in vestibular hair cell-calyx synapses, the points where motion-sensing vestibular hair cells meet afferent neurons that connect directly to the brain. The new research explains how these synapses operate so quickly.

In each, a signal-receiving neuron surrounds the end of its partner hair cell with a large cuplike structure called a calyx. The calyx and hair cell remain separated by a tiny gap, or cleft, measuring just a few billionths of a meter.

“The vestibular calyx is a wonder of nature,” Lysakowski said. “Its large cup-shaped structure is the only one of its kind in the entire nervous system. Structure and function are intimately related, and nature obviously devoted a great deal of energy to produce this structure. We’ve been trying to figure out its special purpose for a long time.”

From the ion channels expressed in hair cells and their associated calyces, the authors created the first computational model capable of quantitatively describing the nonquantal transmission of signals across this nanoscale gap. Simulating nonquantal transmission allowed the team to investigate what happens throughout the synaptic cleft, which is more extensive in vestibular synapses than other synapses.

“The mechanism turns out to be quite subtle, with dynamic interactions giving rise to fast and slow forms of nonquantal transmission,” Raphael said. “To understand all this, we made a biophysical model of the synapse based on its detailed anatomy and physiology.”

The model simulates the voltage response of the calyx to mechanical and electrical stimuli, tracking the flow of potassium ions through low-voltage-activated ion channels from pre-synaptic hair cells to the post-synaptic calyx.

Raphael said the model accurately predicted changes in potassium in the synaptic cleft, providing key new insights about changes in electrical potential that are responsible for the fast component of nonquantal transmission; explained how nonquantal transmission alone could trigger action potentials in the post-synaptic neuron; and showed how both fast and slow transmission depend on the close and extensive cup formed by the calyx on the hair cell.

Eatock said, “The key capability was the ability to predict the potassium level and electrical potential at every location within the cleft. This allowed the team to illustrate that the size and speed of nonquantal transmission depend on the novel structure of the calyx. The study demonstrates the power of engineering approaches to elucidate fundamental biological mechanisms, one of the important but sometimes overlooked goals of bioengineering research.”

Quraishi began constructing the model and collaborating with Eatock in the mid-2000s when he was a graduate student in Raphael’s research group and she was on the faculty of Baylor College of Medicine, just a few blocks from Rice in Houston’s Texas Medical Center.

His first version of the model captured important features of the synapse, but he said gaps in “our knowledge of the specific potassium channels and other components that make up the model was too limited to claim it was entirely accurate.”

Since then, Eatock, Lysakowski and others discovered ion channels in the calyx that transformed scientists’ understanding of how ionic currents flow across hair cell and calyx membranes.

Qurashi said, “The unfinished work had weighed on me,” and he was both relieved and excited when Govindaraju, a Ph.D. student in applied physics, joined Raphael’s lab and resumed work on the model in 2018.

“By the time I started on the project, more data supported nonquantal transmission,” Govindaraju said. “But the mechanism, especially that of fast transmission, was unclear. Building the model has given us a better understanding of the interplay and purpose of different ion channels, the calyx structure and dynamic changes in potassium and electric potential in the synaptic cleft.”

Raphael said, “One of my very first grants was to develop a model of ion transport in the inner ear. It is always satisfying to achieve a unified mathematical model of a complex physiological process. For the past 30 years — since the original observation of nonquantal transmission — scientists have wondered, ‘Why is this synapse so fast?’ and, ‘Is the transmission speed related to the unique calyx structure?’ We have provided answers to both questions.”

He said the link between the structure and function of the calyx “is an example of how evolution drives morphological specialization. A compelling argument can be made that once animals emerged from the sea and began to move on land, swing in trees and fly, there were increased demands on the vestibular system to rapidly inform the brain about the position of the head in space. And at this point the calyx appeared.”

Raphael said the model opens the door for a deeper exploration of information processing in vestibular synapses, including research into the unique interactions between quantal and nonquantal transmission.

He said the model could also be a powerful tool for researchers who study electrical transmission in other parts of the nervous system, and he hopes it will aid those who design vestibular implants, neuroprosthetic devices that can restore function to those who have lost their balance.

The research was supported by the National Institutes of Health (DC012347, DC002290), the Hearing Health Foundation and a seed grant from Rice University’s ENRICH program.

https://drive.google.com/file/d/15FBh3KwHKBxm6IY84bT5L2m9Mq4Hf44q/view
DESCRIPTION: Synaptic junctions that connect motion-sensing vestibular hair cells to the brain transmit signals faster than any other in the human body. Scientists and engineers from Rice University, the University of Chicago and the University of Illinois Chicago created the first computational model capable of quantitatively describing how signals move quickly across the junctions where hair cells and neurons are separated by a cleft, or gap, of just a few billionths of a meter. At the cleft, each signal-receiving neuron surrounds the tip of its partner hair cell with a cuplike structure called a calyx. The model simulated changes in electrical potential (Phi) and potassium potential (EK) throughout the calyx cleft, showing electric potential rises rapidly compared to potassium potential. (Produced by Aravind Chenrayan Govindaraju/Rice University)

https://news-network.rice.edu/news/files/2022/12/0109_BALANCE-1a-WEB.jpg
CAPTION: An illustration and microscopic images show the relationship between motion-sensing vestibular hair cells (blue) of the innermost ear and the cup-shaped “calyx” (green) structures of adjoining nerves that connect directly to the brain. The rapid flow of information through the synapses helps stabilize balance and vision in humans and many other animals. Researchers from Rice University, the University of Chicago and the University of Illinois Chicago created the first quantitative model that shows how potassium ions (K+) and electrical signals are transmitted across the synapses to rapidly deliver information to the brain. (Credit: Aravind Chenrayan Govindaraju/Rice University)

About the University of Illinois Chicago

The University of Illinois Chicago is the city’s largest university and its only public research institution. Its 16 academic colleges serve nearly 34,000 undergraduate, graduate and professional students. UIC is recognized as one of the best public universities and one of the most ethnically rich and culturally diverse campuses in the nation, and as a leader in providing access to underrepresented students. With one of the largest colleges of medicine in the nation, and colleges of dentistry, pharmacy, public health, nursing, social work and applied health sciences, UIC is Illinois’ principal educator of health professionals and a major health care provider to underserved communities.

About the University of Chicago Medicine & Biological Sciences