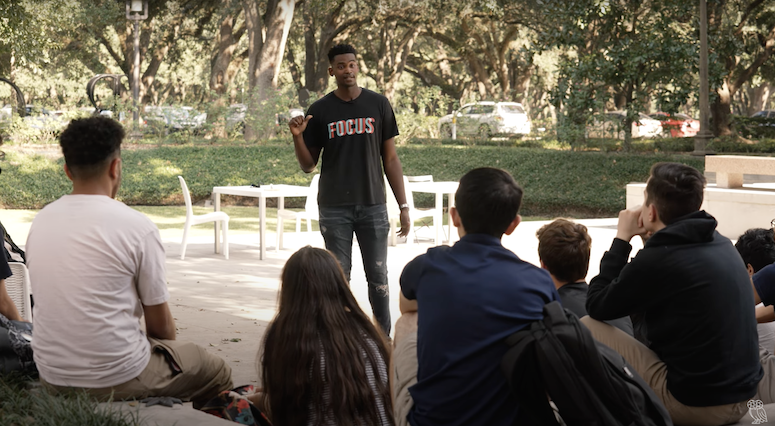 Two years ago, a spoken word poem written by Tim Harrison ’20 opened a peer-reviewed paper in "Equality, Diversity and Inclusion: An International Journal." Harrison returned to campus last year when Deborah Harter, associate professor of French Studies, invited him to share that same poem with her class, a first-year writing intensive seminar on “the power of great fiction to bring to life those forces that stand in our way in the course of our lives — dragons that breathe fire across our paths," as Harter put it.

“Anti-racist actions and accountability: not more empty promises” was written by Mikki Hebl, the Martha and Henry Malcolm Lovett Chair of Psychology; Harrison and some of his fellow Rice classmates contributed to the paper as senior psychology students. The paper, which was honored by the publication with a 2021 Literati Award for Outstanding Paper, begins with excerpts from a spoken-word poem Harrison wrote when the world was reeling over the killing of George Floyd while in police custody.

At 12 years old, I was stopped by the cops as a walked down the block and thought / I wonder what's the purpose? / Videos in my memory started to surface / That explains why I know I'm innocent but feel nervous

Harter had seen Harrison perform “Black Privilege” at an open-mic night on campus in September 2021 and was “riveted,” she said, by his powerfully personal and unflinching words. Following a student-led discussion in class in which the undergrads expressed regret at not having any creative texts in the course that would allow them to talk about racial inequality in the current climate, Harter asked Harrison to come to campus and to perform, for them, the poem that had so enthralled his Brochstein audience the week before. Her students prepared for Harrison's visit by reading that group paper on anti-racist actions and accountability.

“It is really not possible to measure the difference that Timothy Harrison made last semester when he spoke to my students,” Harter said. “They were inspired to consider their own experiences, and insisted that ‘hearing people you know’ talk about what they have felt in response to the actions of others is so much more impactful than watching some slideshow.”

Harrison’s words echoed in her students’ papers for the rest of the semester, she said, and encouraged them to discuss a wide range of issues about the challenges we face with regard to race, gender, identity, immigration status and much more.

“When I showed up to perform at Brochstein Plaza, I felt the usual excitement and nervousness that I feel when performing this piece,” Harrison said. “Whenever topics of race are discussed people can put a mental guard up.”

But as he progressed, he said he noticed he had the crowd’s undivided attention. Wheels were turning.

“​College is a time where students are grappling with their identity,” Harrison said. “They can feel the pressure to fit in by hiding elements of who they are or by affiliating only with those who share with them certain characteristics."

"What was special about performing this piece for Dr. Harter's class was that while my own words centered around my experience as an African American," he said, "her students felt comfortable sharing their very different, but sometimes equally challenging, experiences as trans, multinational, white and first-generation individuals (to attend college) and how it impacted them.”

Harrison played basketball at Rice, where he majored in psychology and served as president of the Black Male Leadership Initiative. After graduation, he had a lucrative job in consulting lined up alongside the prospect of playing professional basketball in the Philippines. But following the onset of the COVID-19 pandemic and the worldwide call for social and racial justice following Floyd’s death, Harrison recognized a deeper calling in himself.

I'm taking a stand / I'm not complaining / I'm taking change in my hands / because what would have happened if Rosa Parks had just sat in the back / Dr. King had a dream / but went back to his nap

Harrison’s realization led him to turn down his coveted consulting job offer and found a nonprofit called the Enjoyable Pain of Growth Academy, which provides professional coaching and personal development services to high school students in traditionally underserved communities. In addition to being a certified executive coach through the Doerr Institute, part of Harrison’s work also involves performing his spoken word poetry.

“My mission in life is to inspire and equip people to realize their potential,” Harrison said.

The opportunity to speak with first-year students was especially meaningful, said Harrison, who was delighted to hear the elevated conversations that took place following the performance.

“Having space for these conversations to happen as freshmen prepares them to take advantage of and have a fuller experience of the diversity that Rice brings,” Harrison said. “I think the medium of spoken word poetry allowed what could have been a tense conversation about race to become a unifying learning experience.”