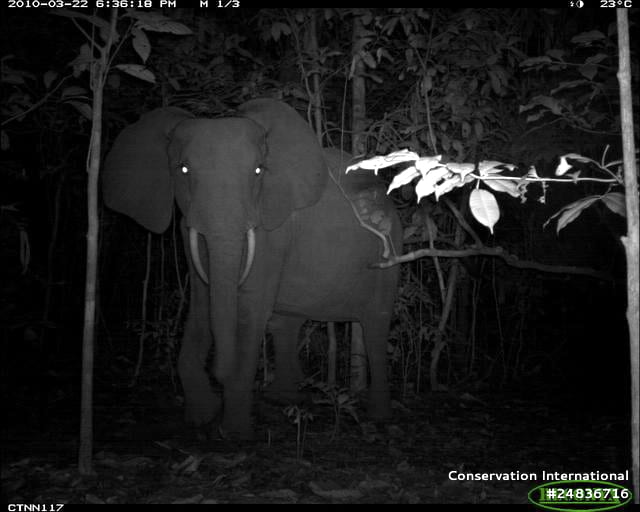 How do animals in the wild use their time? A researcher at Rice University is part of a new study that shows what motivates the daily ramble of tropical populations.

The study by an international team that includes Rice bioscientist Lydia Beaudrot and is led by Andrea Vallejo-Vargas, a graduate student at the Norwegian University of Life Sciences and currently a visiting scholar at Rice, found that communities of mammals across the wet tropics divide their days in similar ways, all generally geared toward finding their next meal. (Or avoiding being the next meal.)

Using millions of images from camera trap networks in 16 protected forests around the world, they examined the relationship of mammal activities to body sizes and feeding routines to find common characteristics among diverse populations.

Their open-access study in Nature Communications confirms that despite their diversity, similar patterns dominate the days of wildlife in Africa, Asia and the Americas.

The study showed that the activity of herbivores and insectivores was largely influenced by temperature in the environment (in study-speak, “thermoregulatory constraints”). For instance, large African herbivores are seven times more likely to be nocturnal than smaller herbivores.

Interactions between predators and prey were primarily dominated by the time of day.

Within that regime, the researchers found “top-down” activities that dominate the days of prey naturally focus on not getting eaten. They avoid exposure when predators are most likely to be on the hunt. In this regard, size also matters: Small carnivores, for instance, alter their activities to reduce their encounters with large carnivores.

“As you think about a food chain, top-down refers to how higher tropic levels — that is, predators — affect their prey, whereas bottom-up refers to how lower trophic levels — food sources including plants and insects — affect the animals that eat them,” said Beaudrot, an assistant professor of biosciences.

“This paper is a prime example of how important it is to have standardized data collection replicated over large spatial extents,” she said. “By analyzing data collected in the same way in national parks throughout the tropics, we have been able to identify similarities in behavioral activity that were previously unable to be quantified.”

Beaudrot provided feedback throughout the development of the research project and manuscript and advised the team on specifics of working with the camera-trap data based on her experience.

She said all cameras were located well within the national parks and were set up in the best possible way to assess tropical wildlife with the least human impact. “None of the protected areas are free from human influences, but they give us the greatest chance of measuring similarities in wildlife among regions,” Beaudrot said.

She noted that even though species in different regions have evolved in isolation from each other, the study provides solid evidence that similar environmental conditions in rainforests around the world result in consistent activity patterns among wildlife.

“This suggests that there has been convergence in animal behavior in response to rainforest environments,” Beaudrot said.

Co-authors of the paper are Rice visiting scholar Asunción Semper-Pascual; Douglas Sheil of the Norwegian University of Life Sciences, Wageningen University in the Netherlands and the Center for International Forestry Research Indonesia; Robert Bitariho of Mbarara University of Science and Technology, Uganda; Jorge Ahumada of the Moore Center for Science, Conservation International, Arlington, Virginia; Emmanuel Akampurira of Ghent University, Belgium, and Mbarara University; Santiago Espinosa of the Autonomous University of San Luis Potosí, Mexico, and the Pontifical Catholic University of Ecuador, Quito; Vittoria Estienne of the Wildlife Conservation Society, Republic of Congo; Patrick Jansen of Wageningen and the Smithsonian Tropical Research Institute, Panama; Charles Kayijamahe of the International Gorilla Conservation Program, Kigali, Rwanda; Emanuel Martin of the College of African Wildlife Management, Tanzania; Marcela Guimarães Moreira Lima of the Federal University of Pará, Brazil; Badru Mugerwa of the Leibniz Institute for Zoo and Wildlife Research, Berlin, and the Technical University of Berlin; Francesco Rovero of the University of Florence and the Science Museum of Trento, Italy; Julia Salvador of the Wildlife Conservation Society of Ecuador; Fernanda Santos of the Museu Paraense Emílio Goeldi, Belém Pará, Brazil; Wilson Roberto Spironello of the National Institute of Amazonian Research, Brazil; Eustrate Uzabaho of the International Gorilla Conservation Program; and Richard Bischof of the Norwegian Institute of Life Sciences.

The Research Council of Norway (NFR301075) and the National Science Foundation (DEB-2213568) funded the research. 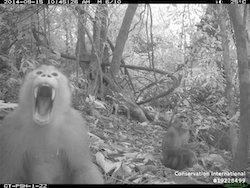 A southern pig-tailed macaque makes its feelings known to a camera trap in one of millions of photos analyzed for a new study led by a Rice University visiting student. The study found striking similarities in how rainforest animals across the world spend their days. (Credit: Courtesy of Lydia Beaudrot/Conservation International) 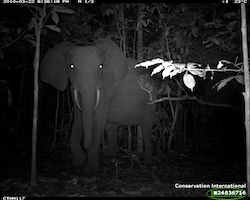 An elephant faces a camera trap in one of millions of photos analyzed for a new study led by a Rice University visiting student. The study found striking similarities in how rainforest animals across the world spend their days. (Credit: Courtesy of Lydia Beaudrot/Conservation International)