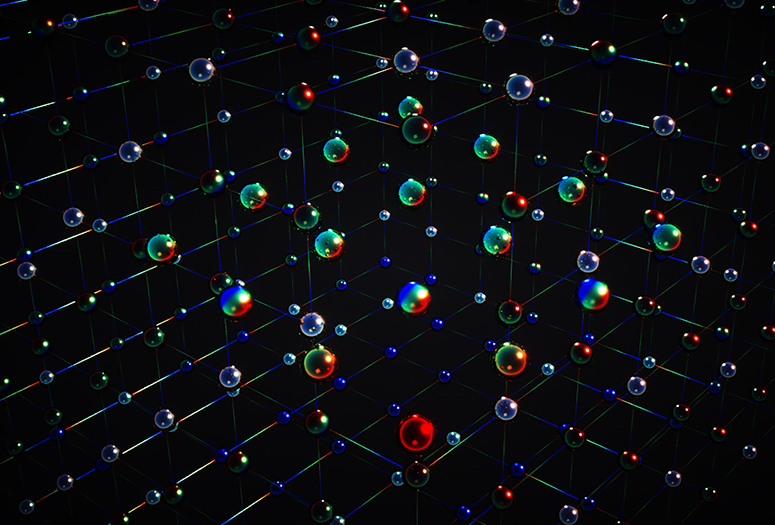 HOUSTON – (Sept. 1, 2022) – Japanese and U.S. physicists have used atoms about 3 billion times colder than interstellar space to open a portal to an unexplored realm of quantum magnetism.

“Unless an alien civilization is doing experiments like these right now, anytime this experiment is running at Kyoto University it is making the coldest fermions in the universe,” said Rice University’s Kaden Hazzard, corresponding theory author of astudy published today in Nature Physics. “ Fermions are not rare particles. They include things like electrons and are one of two types of particles that all matter is made of.”

A Kyoto team led by study author Yoshiro Takahashi used lasers to cool its fermions, atoms of ytterbium, within about one-billionth of a degree of absolute zero, the unattainable temperature where all motion stops. That’s about 3 billion times colder than interstellar space, which is still warmed by the afterglow from the Big Bang.

“The payoff of getting this cold is that the physics really changes,” Hazzard said. “The physics starts to become more quantum mechanical, and it lets you see new phenomena.”

Atoms are subject to the laws of quantum dynamics just like electrons and photons, but their quantum behaviors only become evident when they are cooled within a fraction of a degree of absolute zero. Physicists have used laser cooling to study the quantum properties of ultracold atoms for more than a quarter century. Lasers are used to both cool the atoms and restrict their movements to optical lattices, 1D, 2D or 3D channels of light that can serve as quantum simulators capable of solving complex problems beyond the reach of conventional computers.

Takahashi’s lab used optical lattices to simulate a Hubbard model, an oft-used quantum model created in 1963 by theoretical physicist John Hubbard. Physicists use Hubbard models to investigate the magnetic and superconducting behavior of materials, especially those where interactions between electrons produce collective behavior, somewhat like the collective interactions of cheering sports fans who perform “the wave” in crowded stadiums.

“The thermometer they use in Kyoto is one of the important things provided by our theory,” said Hazzard, associate professor of physics and astronomy and a member of the Rice Quantum Initiative. “Comparing their measurements to our calculations, we can determine the temperature. The record-setting temperature is achieved thanks to fun new physics that has to do with the very high symmetry of the system.”

The Hubbard model simulated in Kyoto has special symmetry known as SU(N), where SU stands for special unitary group — a mathematical way of describing the symmetry — and N denotes the possible spin states of particles in the model. The greater the value of N, the greater the model’s symmetry and the complexity of magnetic behaviors it describes. Ytterbium atoms have six possible spin states, and the Kyoto simulator is the first to reveal magnetic correlations in an SU(6) Hubbard model, which are impossible to calculate on a computer.

“That’s the real reason to do this experiment,” Hazzard said. “Because we're dying to know the physics of this SU(N) Hubbard model.”

“One of the fascinating questions that experiments can explore is the role of symmetry,” Ibarra-García-Padilla said. “To have the capability to engineer it in a laboratory is extraordinary. If we can understand this, it may guide us to making real materials with new, desired properties.”

Takahashi’s team showed it could trap up to 300,000 atoms in its 3D lattice. Hazzard said accurately calculating the behavior of even a dozen particles in an SU(6) Hubbard model is beyond the reach of the most powerful supercomputers. The Kyoto experiments offer physicists a chance to learn how these complex quantum systems operate by watching them in action.

The results are a major step in this direction, and include the first observations of particle coordination in an SU(6) Hubbard model, Hazzard said.

“Right now this coordination is short-ranged, but as the particles are cooled even further, subtler and more exotic phases of matter can appear,” he said. “One of the interesting things about some of these exotic phases is that they are not ordered in an obvious pattern, and they are also not random. There are correlations, but if you look at two atoms and ask, ‘Are they correlated?' you won't see them. They are much more subtle. You can't look at two or three or even 100 atoms. You kind of have to look at the whole system.”

Physicists don’t yet have tools capable of measuring such behavior in the Kyoto experiment. But Hazzard said work is already underway to create the tools, and the Kyoto team’s success will spur those efforts.

“These systems are pretty exotic and special, but the hope is that by studying and understanding them, we can identify the key ingredients that need to be there in real materials,” he said.

The research at Rice was supported by the Welch Foundation (C-1872) and the National Science Foundation (1848304).

https://news-network.rice.edu/news/files/2022/08/0711_COLDEST-p3-lg.jpg
CAPTION: An artist’s conception of the complex magnetic correlations physicists have observed with a groundbreaking quantum simulator at Kyoto University that uses ytterbium atoms about 3 billion times colder than deep space. Different colors represent the six possible spin states of each atom. The simulator uses up to 300,000 atoms, allowing physicists to directly observe how particles interact in quantum magnets whose complexity is beyond the reach of even the most powerful supercomputer. (Image by Ella Maru Studio /Courtesy of K. Hazzard/Rice University)

https://news-network.rice.edu/news/files/2022/08/0711_COLDEST-p4-lg.jpg
An artist’s conception of the complex magnetic correlations physicists have observed with a groundbreaking quantum simulator at Kyoto University that uses ytterbium atoms about 3 billion times colder than deep space. Different colors represent the six possible spin states of each atom. The simulator uses up to 300,000 atoms, allowing physicists to directly observe how particles interact in quantum magnets whose complexity is beyond the reach of even the most powerful supercomputer. (Image by Ella Maru Studio /Courtesy of K. Hazzard/Rice University)