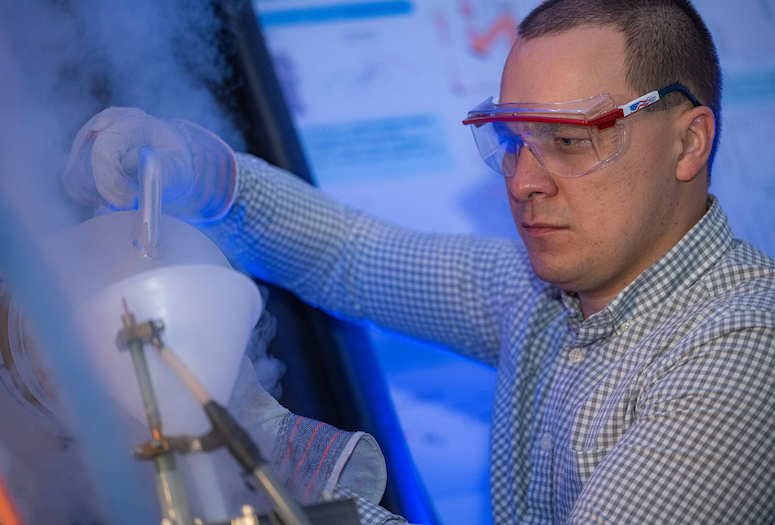 HOUSTON – (Feb. 15, 2022) – Phonons are collective atomic vibrations, or quasiparticles, that act as the main heat carriers in a crystal lattice. Under certain circumstances, their properties can be modified by electric fields or light. But until now, nobody noticed they can respond to magnetic fields as well.

That may be because it takes a powerful magnet.

Rice University scientists led by physicist Junichiro Kono and postdoctoral researcher Andrey Baydin triggered the unexpected effect in a totally nonmagnetic semiconducting crystal of lead and tellurium (PbTe). They exposed the small sample to a strong magnetic field and found they could manipulate the material’s “soft” optical phonon mode.

Unlike acoustic phonons that can be understood as atoms moving in sync, produce sound waves and influence a material’s thermal conductivity, optical phonons are represented by neighboring atoms oscillating in opposite directions and can be excited by light. Hence, the “optical” tag.

Pumping the field to 25 Tesla prompted the sample to Zeeman splitting, in which spectral lines separate like light through a prism but in a magnetic field, a critical feature in nuclear magnetic resonance devices. The lines also exhibited an overall shift with the magnetic field. They reported these effects were much stronger than expected by theory.

“This work reveals a new way of controlling phonons,” Kono said of the study, which appears in Physical Review Letters. “Nobody expected that phonons can be controlled by a magnetic field, because phonons usually don't respond to magnetic fields at all unless the crystal is magnetic.”

The discovery was made possible by RAMBO (the Rice Advanced Magnet with Broadband Optics), a tabletop spectrometer in Kono’s lab that allows materials to be cooled and exposed to high magnetic fields. Hitting the sample with lasers allows researchers to track the motion and behavior of electrons and atoms inside the material.

In this case, the alternating atoms react differently under the set of conditions -- low temperature, magnetized and triggered by terahertz waves -- imposed by RAMBO. The spectrometer senses the phonons’ absorption of polarized light.

“The magnetic field forces these ions to oscillate in a circular orbit,” said co-lead author Baydin, a postdoctoral researcher in Kono’s lab. “The result is that the effective magnetic moment of these phonons is very large.

“There are no resonant interactions between phonons and electrons in high magnetic fields, so it’s impossible that electrons caused the magnetic response of phonons,” he said. “What’s surprising is that the phonons themselves seem to be directly responding to the magnetic field, which people hadn’t seen before and didn’t think was possible.”

Kono said the discovery’s applications remain to be seen, but he suspects it will be of interest to quantum technologists. “I think this surprising discovery has long-term implications in quantum phononics because now there’s a way to control phonons using a magnetic field,” he said.

Kono is the Karl F. Hasselmann Professor in Engineering and a professor of electrical and computer engineering, of physics and astronomy and of materials science and nanoengineering.

The research was funded by the National Science Foundation (1720595), a Brasil@Rice Collaborative Grant, the São Paulo Research Foundation (2015/16191-5, 2018/06142-5) and the National Council for Scientific and Technological Development (307737/2020-9), the Los Alamos Laboratory Directed Research and Development Program, the U.S. Department of Energy and the Japan Society for the Promotion of Science (20H05662). 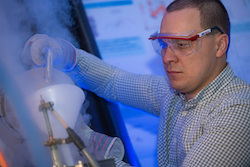 Rice University postdoctoral researcher Andrey Baydin prepares to run an experiment at RAMBO, the Rice Advanced Magnet with Broadband Optics, a tabletop spectrometer that allows materials to be cooled and exposed to high magnetic fields. The instrument helped uncover a phenomenon by which nonmagnetic phonons can be manipulated by a magnetic field. (Credit: Jeff Fitlow/Rice University) 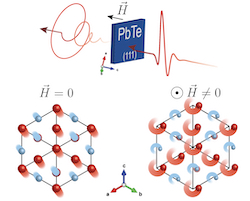 The crystal structure of a lead (red) and tellurium (blue) compound at left, and under the influence of a strong magnetic field at right. Experiments at Rice University showed the field triggers the material’s phononic magnetic circular dichroism, a phenomenon by which left-handed magnetic fields excite right-handed phonons and vice versa. (Credit: Andrey Baydin/Rice University)