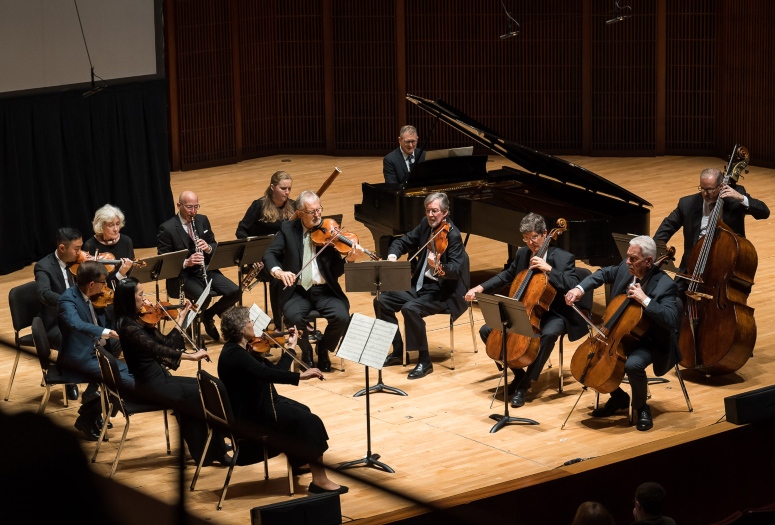 “The great thing about music and young musicians is that every note you play is an opportunity to redefine yourself. This is the wonderful roller-coaster of making live music,” said Larry Rachleff, a 30-year conductor and teacher at Rice University’s Shepherd School of Music, in a recording played at his memorial service Oct. 29.

Rachleff’s life came to an end, but his indelible legacy will endure at the Shepherd School for generations. A pillar of the school’s symphony and chamber orchestras, he was renowned throughout the classical music world for his deep musical understanding, powerful interpretation of scores and rapport with performance ensembles.

More than 500 students, faculty, staff and friends gathered at Stude Concert Hall to remember Rachleff, who died Aug. 8 of non-Hodgkin lymphoma at the age of 67. The evening included a celebratory reception, a video tribute recorded by former students and colleagues, and, befittingly, an orchestral concert to pay tribute to the educator.

The evening was both somber and celebratory, a time to gather in remembrance of not only Rachleff’s lasting impact on students who learned under his tutelage, but also his radiant impact on the performing arts.

“This honorary title will memorialize Larry’s mark on our university and will convey Larry’s profound musical contributions to our country and beyond,” said Rice President Reginald DesRoches.

From the moment he arrived at Rice in 1991, Rachleff was revered as a dynamic, exacting maestro who expected — and elicited — the very best performance standards from his students and helped bring the Shepherd School to world-class standing.

“The profoundness of Larry’s humanity was felt by all who attended — from students and alumni to faculty and community members,” said Shepherd School alumnus Matthew Detrick ’03 ’05, founder of Houston’s Apollo Chamber Players. “Larry’s wise words to ‘play every note like it’s your last’ taught us not only how to be artists striving for excellence but, more meaningfully, compassionate human beings.”

That same spirit was evidenced on stage by the evening’s performers, many of whom were Rachleff’s colleagues, including Norman Fischer, the Herbert S. Autrey Professor of Cello.

“It was such an honor for each of us who performed in the tribute concert for our dear friend Larry. He was the reason why most of us are here,” Fischer said. “Larry literally recruited each of us to come to the Shepherd School, either as students or faculty. He knew the great teachers who could bring the right mix of teaching excellence, integrity and community values to the school.”

Rachleff’s first orchestra student, Gerardo Edelstein ’94, reflected on how his time with the maestro shaped his future.

“My experience at Rice was life-changing. Larry’s wisdom, support and friendship means so much to me,” said Edelstein, who is now the director of orchestral studies at Pennsylvania State University, the conductor of its philharmonic and chamber orchestras and the artistic director of the Penn’s Woods Summer Music Festival.

Edelstein is one of many former students who now serve as a testament to Rachleff’s ability to produce top-notch thinkers and creators in the classical music industry.

“I am eternally grateful for all that Larry has done for me, and I am now the conductor I am because of Larry,” Edelstein said.

The musicians performed without a conductor; Fischer said Rachleff’s essence was present in the hall to guide them.

“The concert's concluding work, ‘Appalachian Spring,’ was the perfect work to capture Larry’s spirit,” he said. “It is a work he deeply loved and conducted throughout his career. Our performing this without a conductor helped us to draw out both our individual and collective power and inspiration to the rehearsals and concert. We so deeply miss him.”