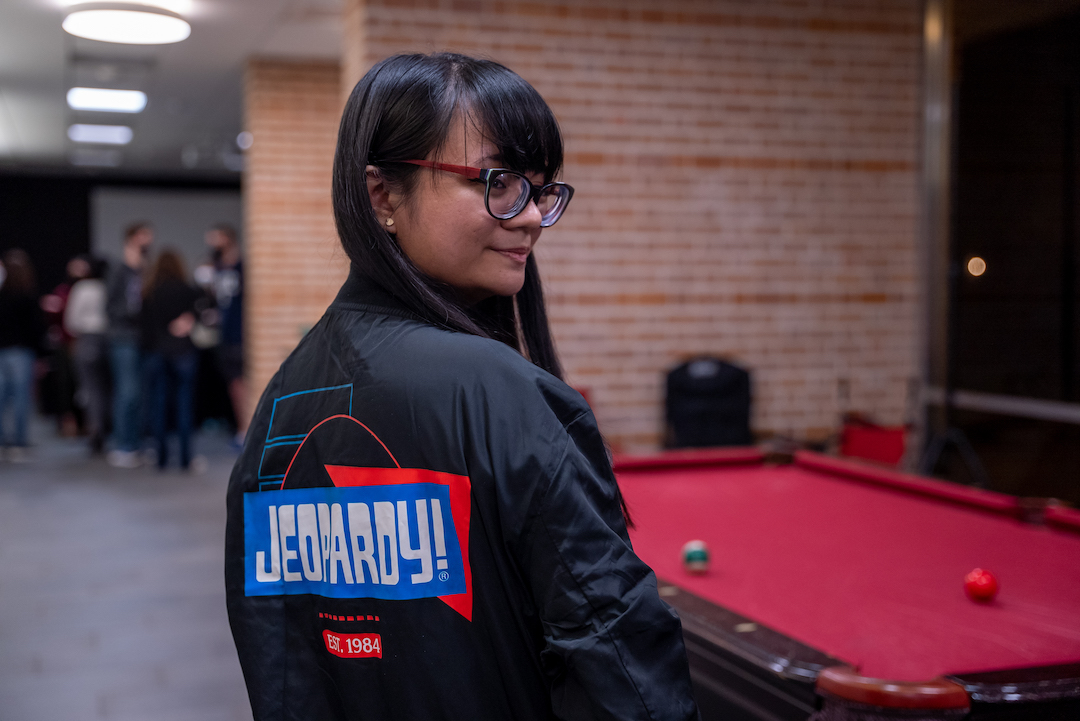 Trivia-lovers the world over got to know Brown College senior Jasmine Manansala last week when she competed in the “Jeopardy!” National College Championship Feb. 8. For the computer science major — one of 36 contestants in the award-winning game show’s university tournament — her appearance on the show was the stuff of childhood dreams.

“It’s something that’s been kind of a constant throughout my life,” she said of the long-running trivia contest, a mainstay of American pop culture for decades now.

Growing up in San Antonio, Manansala says weekly “Jeopardy!” marathons with her parents were some of her fondest memories. “We would record it throughout the week, and then Friday or Saturday we would go ahead and watch all five episodes that we’d recorded in a row. And any time before I would have some sort of academic competition … we would watch a few episodes beforehand to give me luck.”

Manansala competed in one of 12 quarterfinal rounds of the tournament, placing second behind Louisiana State University’s Stephen Privat, who advanced to the semifinal round. While she didn’t advance, Manansala was still awarded $10,000 for marking it to the quarterfinals, which she plans to put toward her tuition and corrective vision surgery.

In her spare time, Manansala competes on Rice’s Quiz Bowl trivia team and loves to take trivia quizzes from Sporcle.com. She’s also an Associates Coordinator at Brown and is a member of Rice Design.

Manansala’s path to the “Jeopardy!” stage in Culver City, California, began in the fall of 2020, when she threw her hat in the ring by taking a free online general knowledge test for college students interested in appearing on the game show. Not long after, she got an email inviting her to take a live “in-person” test of 50 questions conducted over Zoom.

“I was feeling pretty bad after the second round because there were a bunch that I knew I missed, and I thought ‘OK, I’m not going to progress after that,’” Manansala admitted. “But then after that, I got an invitation to do a mock game and a mini-interview with other people who had passed both rounds of the general knowledge test.”

After taking part in the mock game in January 2021 over the winter break, the waiting began in earnest. “I didn’t hear back until around summer that I was in the final pool to be chosen,” Manansala said. “My place hadn’t been solidified yet, and it wasn’t until October that I heard the confirmation that I actually would be in the tournament.”

On that fateful October day, Manansala was actually mid-nap when she got the call. “I think I had just woken up from a nap at the time, because I know that I missed a call from ‘Jeopardy!’ and I felt really bad about it.

“I called back and said I was sorry, and then I heard the news that I was going to be in the National College Championship. I don’t think my brain had quite processed it yet because I was still in half-sleepy, half-apology mode. So it really took me a second before I actually understood what was going on,” she said, laughing.

In the month between getting the news and heading to California for filming in November, Manansala was told the only folks she could notify about her upcoming appearance were her parents, as well as the professors whose classes she’d have to miss to make the trip. “I’m happy that they were excited because it also meant that I did get some deadline extensions, which I think was one of my favorite parts,” she said with a chuckle.

Manansala and her fellow participants were finally allowed to spread the word about their upcoming “Jeopardy!” appearances about two weeks before the college tournament’s first episode aired Feb. 8. In the meantime, Jasmine practiced for the game with the online quiz website Protobowl’s “Jeopardy!”-themed free mock games. That said, ever the diligent Rice student, Manansala didn’t let her prep distract her from her studies.

“I was also pretty busy with classes, and I’m hoping I made the right choice, but I was prioritizing the courses that I had over being able to really study for ‘Jeopardy!’” she said.

Heading into the game, Manansala had her fingers crossed that there might be a category on Greco-Roman mythology (she’s been a huge fan since elementary school). A self-professed lover of even the most “groan-worthy” puns (“That’s what makes them great!” she exclaimed), she also hoped to see some wordplay categories. As for topics she prayed wouldn’t pop up on the iconic video board, “I haven’t really been keeping up with pop culture for this year and last year,” she said, “so something like that I thought would really hurt me, stuff like music.”

In fact, there’s one music question Manansala says still haunts her — a Double Jeopardy on a $1,600 clue in a topic about electronic music DJs. After fellow competitor Ella Feiner of Princeton University answered incorrectly, the question was up for the taking.

“I had the correct response in my head at the time — ‘Turn Down for What’ by DJ Snake and Lil Jon — but then I kind of dismissed it, (thinking) ‘There’s no way that’s going to be correct,’” Manansala said. “But if I had actually buzzed in and answered, then I would have had enough money to make the wagering situation a lot more interesting.”

Even though Manansala was the only competitor to correctly name the Venus flytrap as the answer to Final Jeopardy, her competitor from LSU had amassed enough of a lead going into the round that he still had a high enough score to win despite not making a wager on the final question.

“I will never forget that for the rest of my life,” Manansala said, but swore she harbored no ill will toward Privat. “I was really disappointed at the time that I wasn’t able to advance, but I’m still happy that Stephen won. He’s a really nice person, so I’m glad that he got to go ahead.”

Manansala, her fellow contestants and the three students chosen as alternates have all kept in touch through a group chat they started with the GroupMe smartphone app. They’ve had a blast sharing memes, tweets and jokes with each other, Manansala said, as well as all the nice, funny and occasionally hostile comments about their respective performances that have flooded social media. But believe it or not, it’s those snarky comments that Manansala was most looking forward to seeing.

“I was kind of excited for people to be mean to me online, to be honest, because sometimes it’s kind of funny,” she said, breaking into laughter. In reference to two of her playful responses to questions from host Mayim Bialik where Manansala shared she was allergic to both peanut butter and salmon as well as the Final Jeopardy answer, a fan tweeted “I’d wager the Venus flytrap would send her out in hives,” “which I thought was really funny,” she said.

The night Manansala’s episode aired, she was joined by a plethora of her Brown College friends and supporters. They filled the Brown commons to watch their friend compete live, cheering along wildly with every correct answer she gave.

“It just made me feel so good,” Manansala said. “It gave me such a boost of self-confidence. It makes you feel really warm,” she continued, her voice cracking with emotion.

Above all, Manansala is most grateful to her parents for inspiring her to take the jump and compete on such a grand stage. “My dad has really been a driving force in encouraging me to follow whatever it is I want to do, even if the end result seems unlikely,” Manansala said. “If it weren’t for him, then I don’t think I would have been motivated enough to keep going.”

Manansala’s mother, too, “has always been an incredible source of support,” she shared. “She’s worked so hard as a registered nurse to make sure that I can actually follow the things that make me happy. She actually didn’t get to see my game until the end of the week since she’d been working the past few nights.”

For any of her fellow Rice Owls intrigued at the prospect of squaring off against some of the country's brightest college students, Manansala said, “My biggest piece of advice is to just go for it. Take the first step, take the anytime test. And if there’s any point where you’re doubting yourself, just try to surpass that fear and really just go as far as you possibly can.

“I didn’t think I would get as far as I did, but every time I heard something new, I kept surprising myself,” she said. “And it really stuck with me that if I just had a bit more self-confidence when I was up on the podium, then I potentially could have won. So don’t doubt yourself. If you feel like your heart is going in a certain direction, follow that path.”

Due to how much fun she had, Manansala regrets that this “Jeopardy!” experience will be her last. National College Championship contestants are barred from competing on the original version of the show or in future college tournaments.

“At least it’s a fun fact that I can tell people that I’m banned from competing on ‘Jeopardy!,’” she said with a grin.