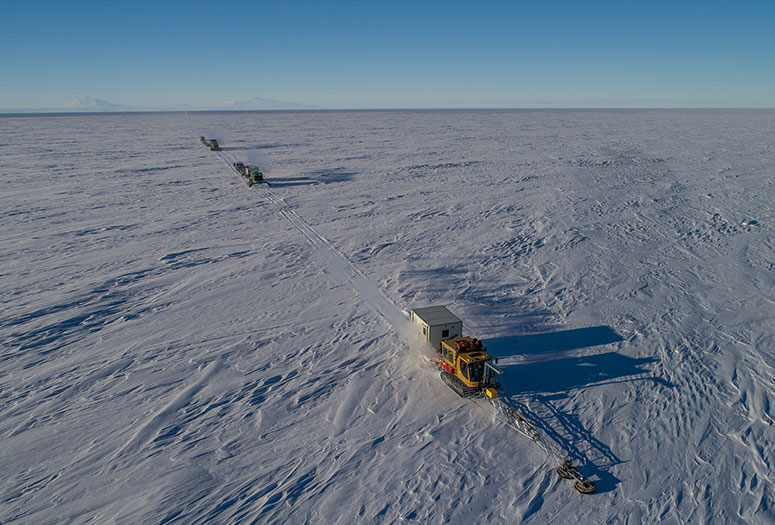 HOUSTON – (April 25, 2022) – Rice University geobiologist Jeanine Ash is participating in an Antarctic mission that aims to recover the first direct evidence that can answer one of the biggest questions about 21st-century climate change: How much will sea level rise and how fast?

Ash is part of a U.S. effort funded by the National Science Foundation (NSF) called the Sensitivity of the West Antarctic Ice Sheet to 2°C project, or SWAIS 2C, which is part of a larger international mission of the same name. Managed by Antarctica New Zealand, the mission involves more than 75 scientists from a dozen nations.

Ash, who studies the isotope signatures of organic compounds, hopes to be selected for the SWAIS 2C on-ice contingent that will use specialized hot-water and geological drill systems to punch through up to 1,000 feet of ice in two places on the periphery of the Ross Ice Shelf, a floating platform of ice as large as France.

“Our main goal while we're out there is to get the sediments that lie below the ice shelf, but my group’s part of the science is acquiring and recording what we call ‘ephemeral properties,’” she said. “Those are things that will begin to change as soon as those sediment cores are at Earth's surface temperatures, pressures and oxygen concentrations.”

Tiny bubbles of air, methane and other gases that have been trapped in the muddy sediments for hundreds of thousands of years will start fizzing away, like bubbles from a newly opened bottle of soda, as soon as the drilled sediment cores are raised above the ice.

“We also want to take samples of the microbial communities that are living in the sediments and preserve them so we can work on them in laboratories back home,” Ash said. “Those sorts of things absolutely have to happen the moment those cores come up.”

Scientists expect Earth’s climate to warm by 2 degrees Celsius in coming decades. The team’s goal is to recover sediments that will tell the story of how the West Antarctic Ice Sheet behaved when global temperatures were that warm in the past.

Earth has gone through at least 12 glacial periods in the last 1 million years. In each, ice caps grew, covering up to a third of the planet, and then melted and retreated in a period of interglacial warming like the one Earth’s in today.

At the warmest point in Earth’s last interglacial, about 125,000 years ago, global sea levels were about 20-30 feet higher than today. Antarctic ice melt could have contributed the bulk of water for those increases, but scientists aren’t certain that it did. And the magnitude of their uncertainty is a reflection of what’s missing from the scientific record: direct, fossil and sediment evidence of what happened in West Antarctica during that time and others like it.

Today, West Antarctica is covered with enough ice to raise ocean levels by more than 14 feet. But much of the land beneath the ice lies thousands of feet below sea level . During a number of interglacials, ice retreated from West Antarctica and it was a shallow sea. Sediments deposited on the seafloor during those periods likely contain evidence of how sea levels responded during interglacials when the climate warmed by 2 degrees Celsius.

To recover sediments, the SWAIS 2C team needs to drill through the ice at sites on the Ross Sea’s Siple Coast that were ice-free in the past. They’ll focus on one site in each of the two Antarctic summers 2022-23 and 2023-24.

Ash, the team’s lead geomicrobiologist, is one of the few early-career researchers to hold an international-level leadership role on the project.

“The sediment cores that we get, we can use to answer different questions,” she said. “We can use them as a paleoclimate archive. But there's a living community in that archive too, and there are microbial ecologists and genomicists who are just interested in the bugs that are living there today, because it's a weird, extreme environment. It's totally dark. It's under pressure. It's in the coldest place in the world. There's so little carbon. Like, what are they even eating? How are they metabolizing?

“And we want to know because when we get to the point of going to places like (Jupiter’s moons) Europa and Enceladus, and we drill under the ice there, we're going to be looking for bugs that have very similar life strategies to whatever's living under the West Antarctic Ice Sheet,” she said

As a geochemist, Ash said she sits at the intersection of the scientific communities probing the ice sheet’s paleoclimate history and microbiology.

“I am not a microbiologist by training,” she said. “But I have done a lot of these types of expeditions. I use a geochemical perspective to look at what these metabolisms are doing, how they're transforming carbon. That makes me adjacent enough to where microbiologists feel safe letting me take their samples.”

Ash hopes to spend 4-6 weeks at the drill site each season, collecting and cataloging ephemeral data and preparing core samples for shipment to labs back home. She said the paleoclimate and microbiological spheres sometimes overlap.

“Within the genetics of that living microbial community, there are also archives,” she said. “If, at some point, that area was ice-free, and I was a happy little phytoplankton that died and got buried, some of my genetic information is still down there below all that ice. And using some really high-precision metagenomic and transcriptomic techniques, we can sort of tease that information out. Clearly, microbes 150 meters below the seafloor are not photosynthesizing right now, but if they have the machinery to do so, then at some point, this was open water. So, that’s one way the microbiology side can contribute to the paleoclimate side.”

Ash said it’s exciting to be able to contribute to something that probes fundamental questions, like: What are the qualities of the water beneath the ice sheet? Where's the ice most vulnerable? And what happens when warm ocean water reaches the bedrock beneath the West Antarctic Ice Sheet?

“Those are unresolved questions,” Ash said. “By recovering these sediments, we can test various models for the retreat of the West Antarctic Ice Sheet and hopefully inform vulnerable coastal communities about what may be in store.”

NSF is providing $680,000 in support for SWAIS 2C drilling, aviation and field operations and $2.9 million in grant funding (2035035, 2034719, 2034990, 2034996, 2034999, 2035029, 2034883) to Rice and other participating U.S. universities, including Binghamton University, Colgate University, Columbia University, Northern Illinois University, the University of Nebraska-Lincoln and Central Washington University. The project is also supported by New Zealand, Germany, Australia, the United Kingdom and South Korea.

https://news-network.rice.edu/news/files/2022/04/0502_ICEDRILL-fig-lg.jpg
CAPTION: Using a specialized, hot-water drill system, scientists from the Sensitivity of the West Antarctic Ice Sheet to 2°C project, or SWAIS 2C, will drill through hundreds of feet of ice in West Antarctica to recover the first direct fossil evidence of what previously happened to the West Antarctic Ice Sheet when average global temperatures reached or exceeded levels anticipated within the next two decades. (Image courtesy of GNS Science)

https://news-network.rice.edu/news/files/2022/04/0502_ICEDRILL-map-540.jpg
CAPTION: To reach their drill sites, scientists from the Sensitivity of the West Antarctic Ice Sheet to 2°C project, or SWAIS 2C, will start on the coast at New Zealand’s Scott Base and traverse about 750 miles of the Ross Ice Shelf in caravans of tracked vehicles. (Image courtesy of GNS Science)