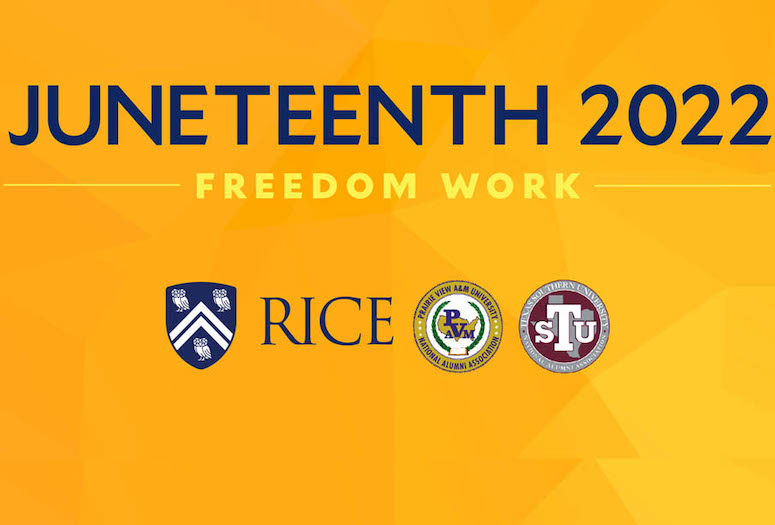 Rice joined Texas Southern University and Prairie View A&M University for a celebration of Juneteenth with a series of panels exploring ideas and questions relevant to the holiday.

The Glasscock School of Continuing Studies was the venue for a morning of discussions hosted by alumni leaders from all three universities, as everyone from historians to entrepreneurs to students and political scientists engaged in conversations about the past, present and future of Black culture, politics and economics.

Alex Byrd, Rice’s vice provost for diversity, equity and inclusion, told the crowd it was the third such Juneteenth event organized by the university, but due to pandemic restrictions in earlier years it was the first held in person.

“As I thought about Juneteenth, I found it to be a rather distinctive holiday,” Rice President David Leebron said in his welcoming remarks. “It looks both back at an important event in our history and it looks forward to what we still have to achieve.”

History was the focus of the event’s first hour. Monique Shankle ’86, the president of the Association of Rice Alumni, led a series of talks and discussions on the broad theme of “Recollecting Freedom,” introducing speakers Frank Jackson, a former mayor of Prairie View, and Karen Kossie-Chernyshev ’85 ‘98, a professor of history at TSU.

Jackson, who has studied the Brazos River Valley’s ties to Juneteenth and the initial settlement of Texas by white slaveowners, discussed the region’s deep-rooted connection to the history of Black life, slavery and emancipation in Texas.

“This cotton and sugar that they were growing in that valley helped produce Houston and Galveston,” Jackson said, pointing out the crops were planted, tended and harvested by slaves brought to Texas by white settlers. Jackson explained that Stephen F. Austin enticed would-be Texas settlers with a sales pitch offering an additional 80 acres of land “for each Negro you bring to Texas.” That helped attract the slave-owning Ellison family’s relocation from Alabama to the Brazos River Valley and what is now Waller County. The family is estimated to have brought between 90 and 110 slaves to the Brazos River Valley. Austin handsomely rewarded the Ellison clan with about 100,000 acres of land.

“We celebrate Juneteenth as the day that Union general Gordan Granger landed at Galveston Island and read General Order Number 3 and brought word of the Emancipation Proclamation, passed two and a half years earlier on January 1, 1863,” Jackson said. “But word didn’t get up to Waller County until August 25 (1865), when George Armstrong Custer and several hundred cavalry troops rode into Hempstead.”

Kossie-Chernyshev led a discussion of her own family’s history and its connections to Texas in the time of slavery through the story of George and Delia Tyres, her paternal great-great grandparents.

Through extensive historical research, Kossie-Chernyshev discovered that her great-great grandmother Delia was born free after the Emancipation Proclamation was issued and news spread to Texas on Juneteenth. She also learned that Delia’s parents were slaves who were forced to relocate to Texas under the ownership of some of Texas’s first 300 white settlers, who received land grants from Austin.

“Great-grandma Delia’s death certificate led me, for the first time in my life, to her final resting place, Evergreen Negro Cemetery,” she said. “I had no idea I had driven past — or even over — her grave countless times on my way to Texas Southern University, nor did I realize her husband George Tyres, my great-grandfather, was also buried there.”

“It is encouraging to know that through faith, hope and perseverance, George and Delia Shields Tyres and their descendants defied the odds,” Kossie-Chernyshev said. “They managed to survive, live, strive and thrive in Houston’s Greater Fifth Ward Region, one saturated with African American Texas History. Thanks to their records and those of other relatives, I can rest knowing that no piece of legislation can ever negate our family’s history. What is certain is that freedom was key.”

The event’s second session explored higher-education opportunities for Black students and pathways to a Ph.D. Tramyra Waites, the president of the Prairie View A&M Alumni Association, chaired the panel and introduced the participants before handing over the microphone to Gregory Maddox, professor of history and dean of the graduate school at TSU, who offered his personal perspective of graduate education from an historically black university.

Maddox said that TSU students tend to look for the types of skills and training that will help them achieve their dreams intellectually as well as professionally in the place where they live.

“It's not just a matter of comfort,” he said. “It's a matter of responsibility in many cases, you know, and so, what we do at TSU is try to make that possible.”

Maddox called for a more realistic partnership between major research institutions and schools like TSU to promote greater integration and allow students to get the best of both worlds without having the “really alienating experience that many of us had when we were in graduate school.”

Melanye Price, a professor of political science and director of the Ruth J. Simmons Center for Race and Justice at Prairie View A&M University, recalled that before she was an undergraduate student, she didn’t know any college professors or people with Ph.Ds.

“I mostly assumed that all the people who wrote textbooks were very old,” she said. “I met a guy one time who was alive who wrote one of my textbooks, and I almost saw him as a ghost.”

It wasn’t until she became a student in Prairie View A&M University’s Benjamin Banneker Honors College that she actually began to meet scholars and professors and learned there was a whole level of knowledge production that she could be a part of.

“We should all aim to be the people who write the books and articles and other stuff too,” she said. “Lots of people are peddling you fairy tales about who Black people are and what it means to be Black. And they have no evidence to support it. And we are believing it because we don't have the skills and enough people to challenge it. This is happening in Texas more than anywhere else. We know that what is in books matters because look at how many people in this state are trying to control what happens in books.

“If you’re a person who feels you have something to say and you are willing to get the necessary skills to do the research to understand whether or not the assumptions and theories that you have in your head are actually demonstrable, actually provable and actually important or actually significant, you should do it, because theories and stories without research are just anecdotes,” she said.

Njideka “Syndi” Nnorom, a Ph.D. candidate in chemical and biomolecular engineering, discussed her pathway to studying at Rice. She didn’t consider a Ph.D. until she interned at Intel while she was a student at Arizona State University. She said ASU’s program focuses on turning out students who go directly into industry, but she learned the career path she was most interested in, involving data analysis, typically involved a Ph.D.

The half-day event concluded with a lively keynote address by Jennifer Dean, president of Dean’s Professional Services, who recounted anecdotes and shared some lessons she learned during more than three decades as an entrepreneur. She recalled launching her staffing business in a two-room office paying $650.87 monthly rent, but eventually expanding to 10,000 square feet.

“I’m not bragging,” she said. “I’m just telling you, you have to work hard at what you do. And it takes a lot of work. So when people come to me and say, ‘I want to open a company,’ I say, ‘Do you want to sacrifice everything?’ Because you’re going to have to put it all there. You can’t play that.”

“I will tell you the things that matter,” Dean said. “I have had the same attorney since I’ve been in business for my 31 years. I’ve had two banks. And I’ve had two CPA firms. If you ask me for my books, I can show you, and they are clean.”

Dean advised young people in the audience to trust their instincts about what they should do with their lives.

“Live your purpose,” she advised. “Live with passion. Live with peace.”