First in-person luncheon since 2019 set for May 17 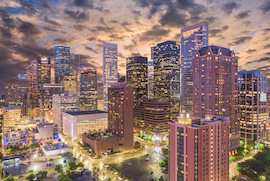 Houstonians’ views on the economy, crime, the pandemic and other issues related to the city’s demographic transformations will be revealed in the 2022 Kinder Houston Area Survey, which will be released at a May 17 at a luncheon at the Marriott Marquis Houston.

The 41st annual survey is the last conducted by Stephen Klineberg, founding director of Rice University's Kinder Institute for Urban Research and professor emeritus of sociology. He will present the findings, which will be accompanied by brief remarks by leaders from Rice and the Houston community at large.

Anne Chao, noted community leader, philanthropist, educator and historian, will be honored with the Stephen L. Klineberg Award for her passionate efforts in advancing the appreciation of diversity in Houston. The award recognizes an individual who, like Klineberg, has made a lasting positive impact on the area.

More information on this year’s event is available at https://kinder.rice.edu/luncheon2022 .

What: Release of the 2022 Kinder Houston Area Survey.

For more information or to set up an embargoed interview about the survey findings, contact Amy McCaig, senior media relations specialist at Rice, at 217-417-2901 or amym@rice.edu.