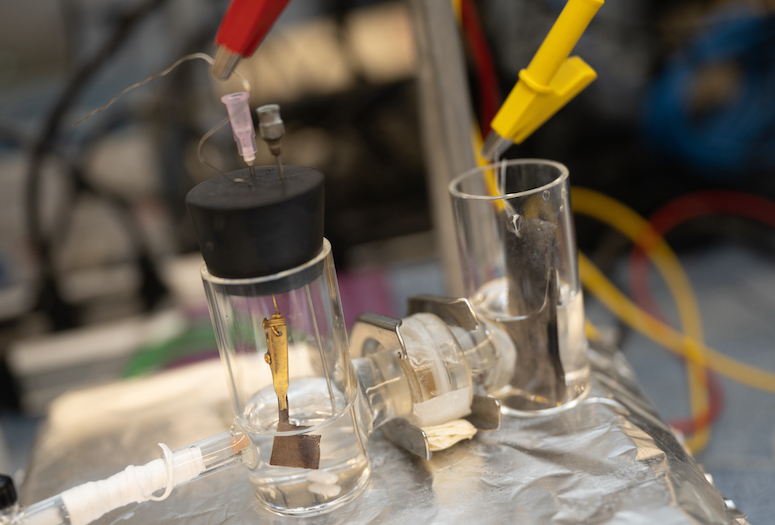 A dash of ruthenium atoms on a mesh of copper nanowires could be one step toward a revolution in the global ammonia industry that also helps the environment.

Collaborators at Rice University’s George R. Brown School of Engineering, Arizona State University and Pacific Northwest National Laboratory developed the high-performance catalyst that can, with near 100% efficiency, pull ammonia and solid ammonia -- aka fertilizer -- from low levels of nitrates that are widespread in industrial wastewater and polluted groundwater.

A study led by Rice chemical and biomolecular engineer Haotian Wang shows the process converts nitrate levels of 2,000 parts per million into ammonia, followed by an efficient gas stripping process for ammonia product collection. The remaining nitrogen contents after these treatments can be brought down to “drinkable” levels as defined by the World Health Organization.

“We fulfilled a complete water denitrification process,” said graduate student Feng-Yang Chen. “With further water treatment on other contaminants, we can potentially turn industrial wastewater back to drinking water.”

Chen is one of three lead authors of the paper that appears in Nature Nanotechnology.

The study shows a promising alternative toward efficient processes for an industry that depends upon an energy-intensive process to produce more than 170 million tons of ammonia per year.

The researchers knew from previous studies that ruthenium atoms are champs at catalyzing nitrate-rich wastewater. Their twist was combining it with copper that suppresses the hydrogen evolution reaction, a way to produce hydrogen from water that in this case is an unwanted side effect.

“We knew that ruthenium was a good metal candidate for nitrate reduction, but we also knew there was a big problem, that it could easily have a competing reaction, which is hydrogen evolution,” Chen said. “When we applied current, a lot of the electrons would just go to hydrogen, not the product we want.”

“We borrowed a concept from other fields like carbon dioxide reduction, which uses copper to suppress hydrogen evolution,” added Wang. “Then we had to find a way to organically combine ruthenium and copper. It turns out that dispersing single ruthenium atoms into the copper matrix works the best.”

The team used density functional theory calculations to explain why ruthenium atoms make the chemical path that connects nitrate and ammonia easier to cross, according to co-corresponding author Christopher Muhich, an assistant professor of chemical engineering at Arizona State.

“When there is only ruthenium, the water gets in the way,” Muhich said. “When there is only copper, there isn’t enough water to provide hydrogen atoms. But on the single ruthenium sites water doesn’t compete as well, providing just enough hydrogen without taking up spots for nitrate to react.”

The process works at room temperature and under ambient pressure, and at what the researchers called an “industrial-relevant” nitrate reduction current of 1 amp per square centimeter, the amount of electricity needed to maximize catalysis rate. That should make it easy to scale up, Chen said.

“I think this has big potential, but it’s been ignored because it’s been hard for previous studies to reach such a good current density while still maintaining good product selectivity, especially under low nitrate concentrations,” he said. “But now we’re demonstrating just that. I’m confident we’ll have opportunities to push this process for industrial applications, especially because it doesn’t require big infrastructure.”

A prime benefit of the process is the reduction of carbon dioxide emissions from traditional industrial production of ammonia. These are not insignificant, amounting to 1.4% of the world’s annual emissions, the researchers noted.

“While we understood that converting nitrate wastes to ammonia may not be able to fully replace the existing ammonia industry in the short term, we believe this process could make significant contributions to decentralized ammonia production, especially in places with high nitrate sources,” Wang said.

Alongside the new study, Wang’s lab and that of Rice environmental engineer Pedro Alvarez, director of the Nanotechnology Enabled Water Treatment (NEWT) Center, recently published a paper in the Journal of Physical Chemistry C detailing the use of cobalt-copper nanoparticles on a 3D carbon fiber paper substrate as an efficient catalyst to synthesize ammonia from nitrate reduction. This low-cost catalyst also showed great promise for the denitrification in wastewater.

Daniel Perea of the Pacific Northwest lab is a co-corresponding author of the paper. Wang is the William March Rice Trustee Chair and an assistant professor of chemical and biomolecular engineering. 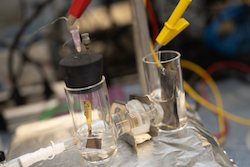 Rice University engineers have designed a catalyst of ruthenium atoms in a copper mesh to extract ammonia and fertilizer from wastewater. The process would also reduce carbon dioxide emissions from traditional industrial production of ammonia. 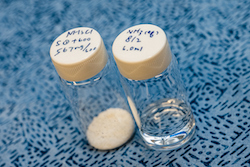 Ammonium chloride, at left, and liquid ammonia are the products of a catalyst developed by engineers at Rice University to convert wastewater into useful chemicals. (Credit: Jeff Fitlow/Rice University) 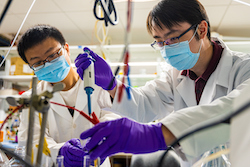 Postdoctoral fellow Zhen-Yu Wu, left, and graduate student Feng-Yang Chen set up an experiment at their Rice University laboratory to extract ammonia and solid ammonia -- aka fertilizer -- from a wastewater model with low levels of nitrate. (Credit: Jeff Fitlow/Rice University) 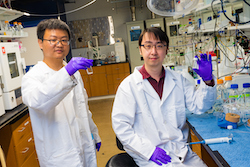