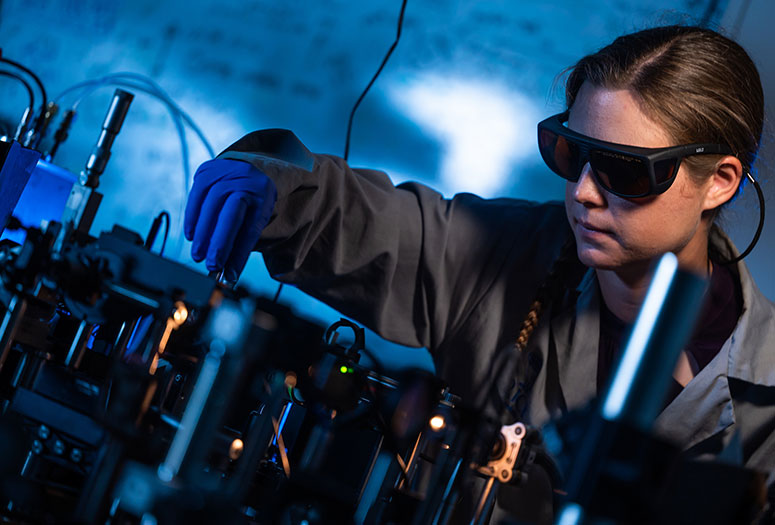 By precisely etching hundreds of tiny triangles on the surface of a microscopic film of zinc oxide, nanophotonics pioneer Naomi Halas and colleagues created a “metalens” that transforms incoming long-wave UV (UV-A) into a focused output of vacuum UV (VUV) radiation. VUV is used in semiconductor manufacturing, photochemistry and materials science and has historically been costly to work with, in part because it is absorbed by almost all types of glass used to make conventional lenses.

“This work is particularly promising in light of recent demonstrations that chip manufacturers can scale up the production of metasurfaces with CMOS-compatible processes,” said Halas, co-corresponding author of a metalens demonstration study published in Science Advances. “This is a fundamental study, but it clearly points to a new strategy for high-throughput manufacturing of compact VUV optical components and devices.”

Halas' team showed its microscopic metalens could convert 394-nanometer UV into a focused output of 197-nanometer VUV. The disc-shaped metalens is a transparent sheet of zinc oxide that is thinner than a sheet of paper and just 45 millionths of a meter in diameter. In the demonstration, a 394-nanometer UV-A laser was shined at the back of the disc, and researchers measured the light that emerged from the other side.

Study co-first author Catherine Arndt, an applied physics graduate student in Halas’ research group, said the key feature of the metalens is its interface, a front surface that is studded with concentric circles of tiny triangles.

“The interface is where all of the physics is happening,” she said. “We’re actually imparting a phase shift, changing both how quickly the light is moving and the direction it’s traveling. We don’t have to collect the light output because we use electrodynamics to redirect it at the interface where we generate it.”

Violet light has the lowest wavelength visible to humans. Ultraviolet has even lower wavelengths, which range from 400 nanometers to 10 nanometers. Vacuum UV, with wavelengths between 100-200 nanometers, is so-named because it is strongly absorbed by oxygen. Using VUV light today typically requires a vacuum chamber or other specialized environment, as well as machinery to generate and focus VUV.

“Conventional materials usually don’t generate VUV,” Arndt said. “It’s made today with nonlinear crystals, which are bulky, expensive and often export-controlled. The upshot is that VUV is quite expensive.”

In previous work, Halas, Rice physicist Peter Nordlander, former Rice Ph.D. student Michael Semmlinger and others demonstrated they could transform 394-nanometer UV into 197-nanometer VUV with a zinc oxide metasurface. Like the metalens, the metasurface was a transparent film of zinc oxide with a patterned surface. But the required pattern wasn’t as complex since it didn’t need to focus the light output, Arndt said.

“Metalenses take advantage of the fact that the properties of light change when it hits a surface,” she said. “For example, light travels faster through air than it does through water. That’s why you get reflections on the surface of a pond. The surface of the water is the interface, and when sunlight hits the interface, a little of it reflects off.”

The prior work showed a metasurface could produce VUV by upconverting long-wave UV via a frequency-doubling process called second-harmonic generation. But VUV is costly, in part, because it is expensive to manipulate after it’s produced. Commercially available systems for that can fill cabinets as large as refrigerators or compact cars and cost tens of thousands of dollars, she said.

“For a metalens, you’re trying to both generate the light and manipulate it,” Arndt said. “In the visible wavelength regime, metalens technology has become very efficient. Virtual reality headsets use that. Metalenses have also been demonstrated in recent years for visible and infrared wavelengths, but no one had done it at shorter wavelengths. And a lot of materials absorb VUV. So for us it was just an overall challenge to see, ‘Can we do this?’”

To make the metalens, Arndt worked with co-corresponding author Din Ping Tsai of City University of Hong Kong, who helped produce the intricate metalens surface, and with three co-first authors: Semmlinger, who graduated from Rice in 2020, Ming Zhang, who graduated from Rice in 2021, and Ming Lun Tseng, an assistant professor at Taiwan’s National Yang Ming Chiao Tung University.

Tests at Rice showed the metalens could focus its 197-nanometer output onto a spot measuring 1.7 microns in diameter, increasing the power density of the light output by 21 times.

Arndt said it’s too early to say whether the technology can compete with state-of-the-art VUV systems.

“It’s really fundamental at this stage,” she said. “But it has a lot of potential. It could be made far more efficient. With this first study, the question was, ‘Does it work?’ In the next phase, we’ll be asking, ‘How much better can we make it?’”

https://news-network.rice.edu/news/files/2022/05/0509_METALENS-Fig-lg.jpg
CAPTION: By precisely etching hundreds of tiny triangular nanoresonators in precisely configured concentric circles on a microscopic film of zinc oxide, photonics researchers at Rice University created a “metalens,” a transparent, solid-state device thinner than a sheet of paper that bends light like a conventional lens. Rice’s metalens converts 394-nanometer ultraviolet light (blue) into 197-nanometer “vacuum UV” (pink) and simultaneously focuses the VUV output on a small spot less than 2 millionths of a meter in diameter. (Infographic by M. Semmlinger/Rice University)

https://news-network.rice.edu/news/files/2022/05/0509_METALENS-nh30-lg.jpeg
CAPTION: Rice University’s Naomi Halas is an engineer, chemist and pioneer in the field of light-activated nanomaterials. (Photo by Jeff Fitlow/Rice University)