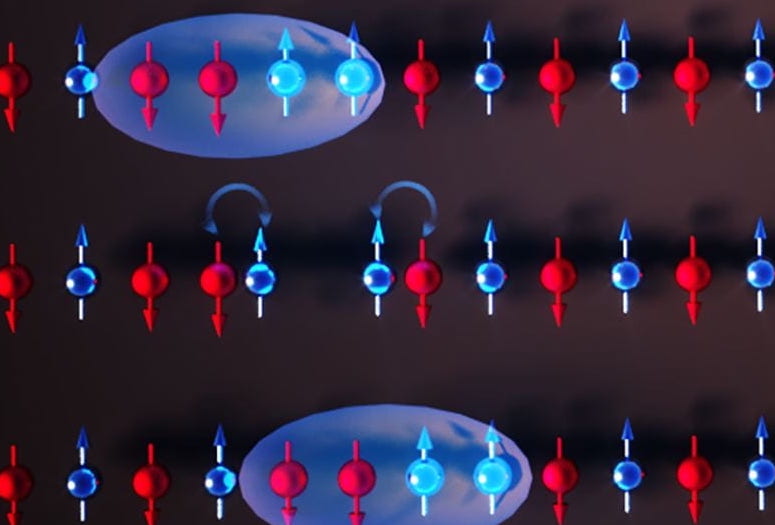 A quantum simulator at Rice University is giving physicists a clear look at spin-charge separation, the quantum world’s version of the magician’s illusion of sawing a person in half.

Published this week in Science, the research has implications for quantum computing and electronics with atom-scale wires.

Electrons are minuscule, subatomic particles that cannot be divided. Despite this, quantum mechanics dictates that two of their attributes — spin and charge — travel at different speeds in one-dimensional wires.

Rice physicists Randy Hulet, Ruwan Senaratne and Danyel Cavazos built an ultracold venue where they could repeatedly view and photograph a pristine version of this quantum spectacle, and they collaborated with theorists from Rice, China, Australia and Italy on the published results.

Quantum simulators exploit quantum properties of real objects like atoms, ions or molecules to solve problems that are difficult or impossible to solve with conventional computers. Rice’s spin-charge simulator uses lithium atoms as stand-ins for electrons and a channel of light in place of a 1D electronic wire.

The universe is awash in heat that obscures the quantum behavior of atoms. To perceive quantum effects in lithium, Hulet’s team used laser cooling to make its atoms 1 million times colder than the coldest natural object in the universe. Additional lasers created the 1D light channel, or optical waveguide.

Electrons are antisocial quantum particles that refuse to share space with one another. Spin-charge separation is a manifestation of that mutual loathing in 1D. It was theoretically formulated by physicists Shinichiro Tomonaga and Joaquin Luttinger about 60 years ago. But measuring it in electronic materials has proven extraordinarily difficult.

Hulet, Rice's Fayez Sarofim Professor of Physics and a member of the Rice Quantum Initiative, said the simulator can probe the physics of spin-charge separation in a way that hasn’t previously been possible.

“People have observed spin-charge separation in solid-state materials, but they've not seen it in a very clean or quantitative way,” Hulet said. “Our experiment is really the first to deliver quantifiable measurements that can be compared with a nearly exact theory.”

Real materials have imperfections, but Tomonaga and Luttinger’s theory describes electrons’ behavior in a flawless 1D wire. The new simulation reveals the behavior of real quantum particles in a pristine setting akin to the theoretical ideal.

“Cold atoms give us the ability to tune the strength of the interaction between particles, allowing for an almost textbook comparison with Tomonaga-Luttinger Liquid theory,” Hulet said.

When one electron strikes another, it imparts energy that can excite the struck electron to a higher energy state. In a 3D material, the excited electron zings away, collides with something, loses a bit of energy, caroms off in a new direction to collide with something else and so on. But that cannot happen in 1D.

Senaratne, a research scientist in Hulet’s lab, said, “They can’t move around one another. They’re trapped in a line. If you move one of them, you have to move them all. That’s why excitations of electrons in a 1D wire are necessarily collective.”

When electrons collide in 1D, excitations ripple down the wire in waves. Tomonaga and Luttinger realized that waves of spin excitation would move slower than charge waves. But Hulet said it is incorrect to imagine this separation as the splitting of an electron or, in the case of the simulator, the splitting of a lithium atom.

“It is not intuitive,” he said. “You have to envision matter existing as waves.”

In 2018, Hulet’s group made a 1D simulator that could excite the equivalent of charge waves, and his team measured how quickly the waves moved. To test the Tomonaga-Luttinger Liquid model, they needed to compare the speed of those charge waves with the speed of spin waves moving down the line.

“We couldn't excite spin waves at that time, but Ruwan and Danyel put together a system that could,” Hulet said. “We had to overcome a technical hurdle related to a process called spontaneous emission.”

Cavazos said, “The effect we're trying to see, it's a little subtle. So if you perturb it too much, it will just be washed away. An analogy would be if we were trying to take a picture of something, but the flash was damaging what we were trying to photograph. So we had to change the color of the flash, in this analogy, to make it more gentle. We also changed the system a little so it wouldn't be as fragile as before. That combination allowed us to actually see the subtle effect.”

The experimental data closely matched predictions from a state-of-the-art theoretical calculation made by the research groups of study co-author Xi-Wen Guan at both the Chinese Academy of Sciences and Australian National University and of co-author Han Pu at Rice.

“As integrated circuits become smaller, chipmakers have to start worrying about dimensionality,” Hulet said. “Their circuits eventually become a one-dimensional system that has to conduct and transport electrons in the same way as the one-dimensional wires we've been talking about.”

The research could also aid the development of technology for topological quantum computers that would encode information in qubits that are free from the decoherence that plagues today’s quantum computers. Microsoft and others hope to create topological qubits with quantum particles called Majorana fermions that may exist in some 1D or 2D superconductors. Hulet’s long-term goal is to simulate a type of 1D superconductor that can host Majorana fermions, and he said this week’s report represents a big step toward that goal.

“We're learning about these systems as we go,” he said. “It’s important for somebody to be doing the fundamentals, learning how to manipulate things experimentally, what the observations mean and how you understand them. This work is a significant step. It demonstrates our ability to do experiments on a system that simulates a one-dimensional superconductor.”

Additional co-authors include Ya-Ting Chang and Aashish Kafle of Rice, Sheng Wang of the Chinese Academy of Sciences and Feng He of both the International School for Advanced Studies and the Italian National Institute of Nuclear Physics in Trieste. 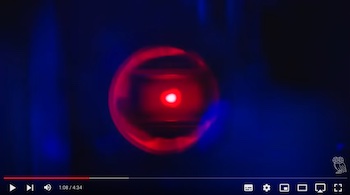 DESCRIPTION: Rice University physicists used ultracold atoms and a 1D channel of light to simulate electrons in 1D wires and study how two of their intrinsic properties — spin and charge — travel at different speeds. They used a laser beam to produce collective waves that rippled along the 1D channel, transporting either spin or charge. The quantum simulator results, which were published in Science in June 2022, provided the clearest demonstration yet of spin-charge separation, a phenomenon first predicted more than 50 years ago that has proven extraordinarily difficult to study in solid-state materials. (Video by Brandon Martin/Rice University) 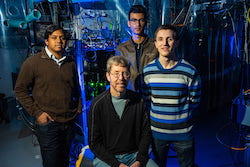 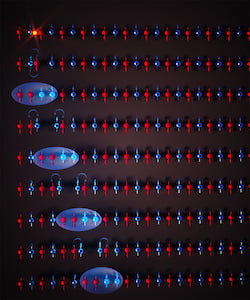 https://news-network.rice.edu/news/files/2022/06/0502_SPINCHARGE_ill11-lg.jpg
CAPTION: Rice University physicists used ultracold atoms and a 1D channel of light to simulate electrons in 1D wires and study how two of their intrinsic properties — spin and charge — travel at different speeds. They used a laser beam (top left) to produce collective waves that rippled left to right along the wire over time (top to bottom), transporting either spin or charge. A spin wave is illustrated. Spins must point up (blue) or down (red), and atoms with opposite spin naturally arrange in an alternating up-down, up-down pattern (top row). The wave transports spin by sequentially exchanging adjacent up/down spins (shaded ovals). Researchers measured the speed of both spin waves and charge waves (not shown), demonstrating the two traveled at different speeds. (Illustration by Ella Maru Studio provided courtesy of R. Hulet/Rice University) 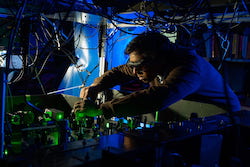 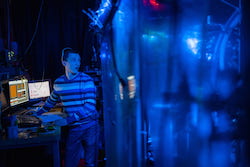 https://news-network.rice.edu/news/files/2022/04/0502_SPINCHARGE_Fit347dc-lg.jpg
CAPTION: To compare the speed of charge and spin waves, Rice University physicist Danyel Cavazos and colleagues built a quantum simulator that uses ultracold lithium atoms as stand-ins for electrons and a channel of light in place of a 1D electronic wire. (Photo by Jeff Fitlow/Rice University) 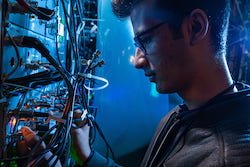