Rice Founder’s Memorial statue to be relocated in Academic Quad 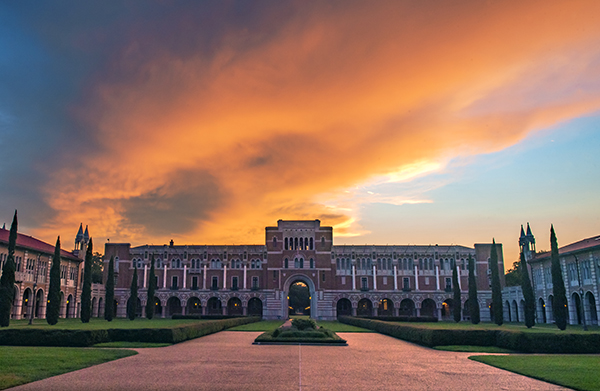 HOUSTON – (Jan. 25, 2022) – Rice University’s Academic Quadrangle will undergo a major redesign that will include moving the Founder’s Memorial statue of William Marsh Rice to a new location within the quadrangle.

Rice’s Board of Trustees has decided the relocated statue will be presented with historical context and information about the university’s founder, including his ownership of enslaved people. A new monument of similar prominence will commemorate the beginning of the university’s integration a half-century after its opening. Other monuments representing other milestones in the university’s history will be added over time.

The Academic Quadrangle is the university’s architectural centerpiece dominated by Lovett Hall, the iconic administration building opened in 1912. Many classes of Rice graduates have received their diplomas in the quadrangle, which has in recent decades been the site of the university’s commencement ceremonies.

“We intend for the Academic Quadrangle to both fully acknowledge the history of our founding and founder, and to mark and celebrate the important evolution and growth of our university over time,” said Rob Ladd, chairman of the Board of Trustees. “We believe the redesign will allow us to move forward as a community, and we are grateful to Rice’s Task Force on Slavery, Segregation and Racial Injustice for its leadership as well as to the many students, faculty, staff, alumni and other valued stakeholders for their thoughts and guidance in helping us reach this decision.”

The trustees’ decision embraces a recommendation from the task force that the Academic Quadrangle undergo “bold change,” and also a Rice Student Association resolution calling for the Founder's Memorial statue’s relocation. The student leadership resolution also said the statue, which stands at the center of the quadrangle, should no longer serve as the area’s “singular point of attraction.”

“The board believes that the founding gift of William Marsh Rice is an essential landmark in our history, and the philanthropy of William Marsh Rice should be recognized,” the board’s statement said. “In addition, we acknowledge our founder’s entanglement with slavery, which is in stark contrast to the modern vision and values of our university.”

“This new vision for the Academic Quadrangle will reflect our growth and progress as a university and a community,” said President David Leebron. “The campus discussions that informed the board’s decision were guided by a spirit of creating a stronger and more inclusive Rice, as we recognize both flaws and progress in our history. In every part of our community, we saw a wide range of views, but often shared aspirations. As a university, we strived to set an example of intellectual candor, respect, commitment to our values and a willingness to engage in the hard conversations that are a precursor to progress.”

The university will launch a process to select a distinguished architect or landscape designer to spearhead the reenvisioning of the quadrangle. The trustees have decided that the new design will feature a “welcoming space” at its center and that other sites around the quadrangle will include artworks or other elements reflecting and celebrating the university’s history and aspirations.

The university expects the design process to begin this spring and a proposed design to be presented to the trustees in May. The physical work on the quadrangle’s redesign will begin as soon as practical after that. Once the plans for the quadrangle are finalized, the university will hold a competition for the new monument commemorating the university’s integration.

The Board of Trustees reached its decision after a working group led by trustee Charles Landgraf reviewed ideas and opinions from students, faculty, staff and alumni, who submitted more than 1,200 responses through an online portal soliciting their input. The working group also met with the chairs of the Task Force on Slavery, Segregation and Racial Injustice, the executive committee of the Association of Rice University Black Alumni and other leaders in the Rice community.

“The board charged us with conducting an inclusive and thorough process, and the respectful input received from all parts of the community was crucial to the recommendations the working group ultimately made to our fellow trustees,” Landgraf said. “Equally gratifying was the quality of deliberation at the meeting of the full Board of Trustees, which led to the unanimous coalescence around the action we are announcing today.”

The university has already implemented another task force recommendation that the Founder’s Memorial statue “should no longer be used as an iconic image of the university in its publicity.”

“We thank all who participated in this process,” the board’s statement said. “It has been a process of careful research, of thoughtful engagement and commentary, and respectful conversation. We look forward to working together to continue building a diverse and inclusive community.”

In a message to alumni on the redesign, the Association of Rice Alumni Board Executive Committee wrote, "We are sincerely grateful to our fellow alumni for thoughtfully sharing your views and engaging in respectful conversations, all of which influenced, and will continue to influence, the university's efforts to ensure a more inclusive community for all."

The Association of Rice University Black Alumni Executive Board wrote in a message to its members that it applauds the "methodical examination of this issue and its impact on the Rice community" and that the decision prepares the university "for continued growth into the future."