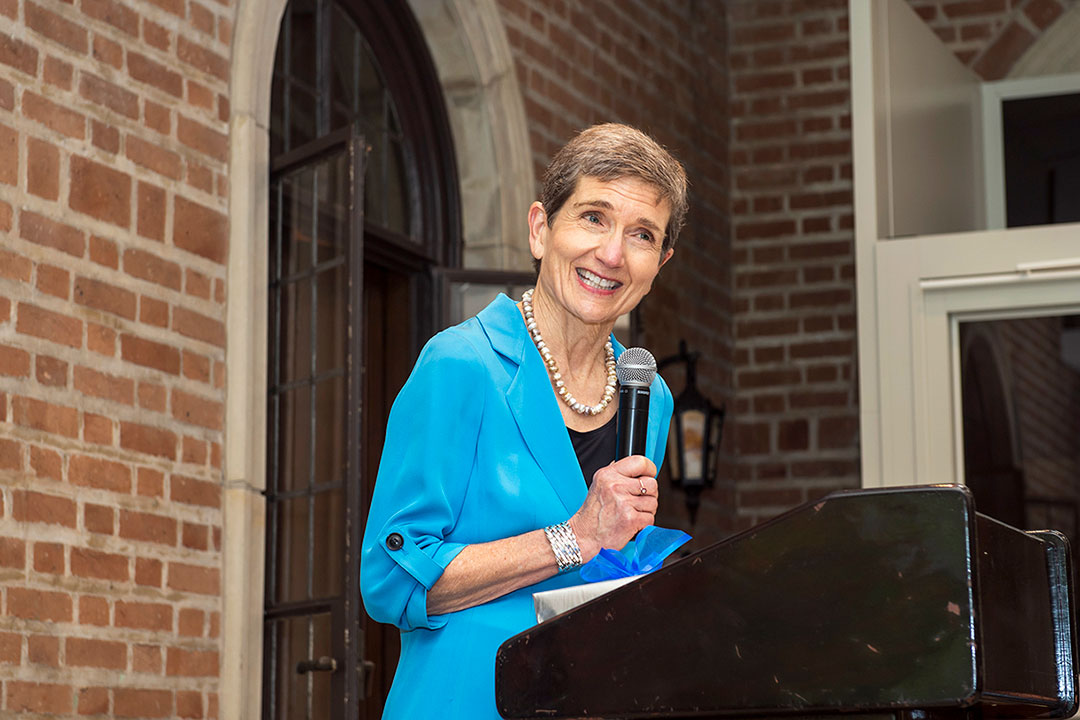 One of the top administrators at Rice University never taught a class here, but grateful colleagues who joined together last week for a celebration of her long and distinguished career hailed her as nothing less than one of the great teachers and leaders on campus.

Dozens of university administrators, staff and faculty gathered in the Cohen House on the afternoon of May 24 for a farewell salute to Kathy Collins, Rice’s longtime vice president for finance who steered the university’s fiscal ship through some of the greatest challenges in its history. Collins is leaving the university this summer after 27 years at Rice.

As some of those who spoke in her honor noted, Collins may carry more institutional knowledge about the financial workings of the university than anybody else alive. In a succession of top-level finance roles, she has kept her finger on the university’s fiscal pulse for more than 25 years.

Collins earned a master’s degree in city planning from Harvard University and a bachelor’s in urban studies from Mount Holyoke College (where she now serves as vice chair of the board of trustees) before embarking on a career in government finance, eventually rising to the position of budget director for the U.S. Department of Transportation. Working in the nation’s capital, she met her husband Bill Mintz, who was then a newspaper reporter assigned to the Houston Chronicle’s Washington bureau. She moved to Rice in 1995 as budget director, ascending to the vice presidency for finance in 2005.

For a generation now, Collins has not only overseen the planning, management and control of Rice’s operating budget, she has also developed and managed the funding plan for nearly $2 billion of campus capital investments. All the while, she has kept Rice operating on a Aaa rating from Moody’s and Standard & Poor’s credit rating agencies. Her guidance helped the university navigate not only a series of global financial downturns, but also two of the most serious crises in its history, Hurricane Harvey and the COVID-19 pandemic.

None of this history was lost on her colleagues gathered in the Cohen House, particularly the university’s president, who only half-jokingly thanked Collins for letting him occasionally get a good night’s rest.

“I have no doubt, when it came to questions of integrity and assuring the financial sustainability of the institution, I just didn’t have to lose any sleep over that,” Leebron said. “I’ve never met anybody who has worked harder than Kathy or voluntarily undertaken tasks that gave me the time to get some sleep at night.”

Faculty recalled Collins patiently explaining to them the basics of budgeting, teaching them how they could accomplish their goals within fiscal constraints. Leebron called her “Kathy the Enabler.” Kathleen Canning, the dean of the School of Humanities, fondly remembered what she described as “budget lessons” under Collins’ tutelage.

“I learned so much,” Canning said. “I see Kathy, truly, as one of my teachers at Rice.”

Yousif Shamoo said he “had not a clue” how the university’s finances operated when he sat down for his first meeting with her. But Collins helped him, the president and the provost dedicate more than $50 million directly to faculty research infrastructure.

“When I first met Kathy in her office, like all faculty, I looked around for the money printer or the elusive pile of gold that was going to be sitting in the corner,” said Shamoo, vice president for research and the Ralph and Dorothy Looney Professor of BioSciences. “I looked, you know, and I didn’t find any of those things. But what I found was a really smart and capable person who was willing to spend time with me and be an ally in building the research infrastructure of Rice University. That was probably better than finding a pot of gold, to be honest with you.”

Over and over again, as they told stories about Collins, her colleagues found themselves talking about hard work and high ethics.

“It’s hard to run a nonprofit institution and bring this giant ship into a balanced budget every year,” said Allison Thacker, president of the Rice Management Co. “And I have watched Kathy sweat over this and try to find that perfect compromise 11 times — and I know she’s done it many more times — but it’s been just like watching an act of grace.”

Brad Fralic, who works for Collins as university controller, joked about her being a demanding boss, but he wasn’t joking at all when he spoke about her kindness.

“One thing I’ve really appreciated about Kathy is that she is authentic,” Fralic said. “She’s genuine. The same Kathy you see in every budget meeting that’s just kind to everybody? That’s just who she is.”

Mikki Hebl, psychology professor at the School of Social Sciences, echoed the words of a number of her colleagues who hailed Collins as a champion for gender equity.

“We love you, friend of Rice University,” Hebl said. “Thank you.”

When Collins stepped up to the podium, she looked back on an era of transformation for Rice in everything from enrollment to research to capital investment to financial aid. She described how working at the university required optimism, a quality that she credited for keeping her at Rice for the last 27 years. And she thanked a long list of friends and co-workers for their help “navigating financial storms and weather storms and public health storms and crises in the higher ed landscape.

“And we’ve done it all together,” she said. “And it’s been an honor to be a part of this work. And I’m grateful to have all of you as colleagues.”

After she leaves Rice, Collins, a runner of half-marathons and an avid cyclist, plans to take a bicycling vacation in France with her husband. (Bicycles play an outsized role in their household; Mintz runs a nonprofit volunteer group called Freewheels Houston that provides bikes to refugees and homeless veterans who need inexpensive transportation.)

“All of you have made working at Rice a great experience,” Collins told her colleagues. “I’ve enjoyed working with each of you. I’ve learned from each of you. And I wish you all the best.”