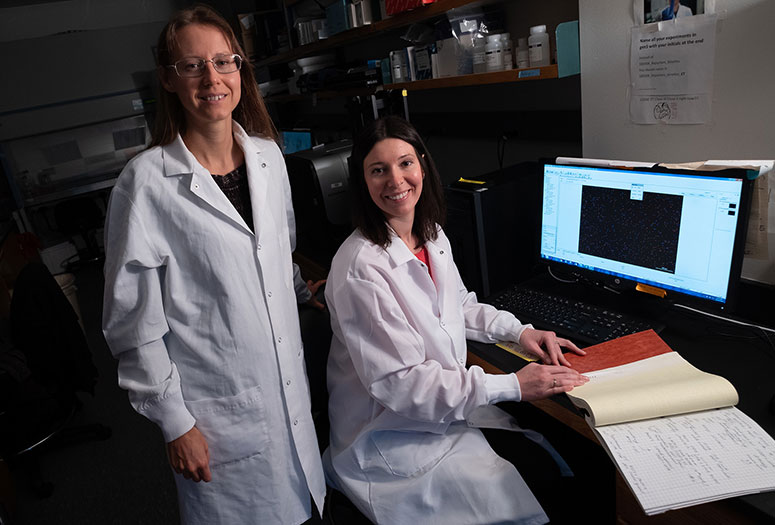 HOUSTON – (June 30, 2022) – Researchers from Rice University and the University of Texas MD Anderson Cancer Center have discovered potential new drugs that work in concert with other drugs to deliver a deadly one-two punch to leukemia.

The potential drugs are still years away from being tested in cancer patients, but a recently published study in the journal Leukemia highlights their promise and the innovative methods that led to their discovery.

In previous studies, the research groups of Rice biochemist Natasha Kirienko and MD Anderson physician-scientist Marina Konopleva screened some 45,000 small-molecule compounds to find a few that targeted mitochondria. In the new study, they chose eight of the most promising compounds, identified between five and 30 closely related analogs for each and conducted tens of thousands of tests to systematically determine how toxic each analog was to leukemia cells, both when administered individually or in combination with existing chemotherapy drugs like doxorubicin.

“One of the big challenges was to establish optimal conditions and doses for testing on both cancer cells and healthy cells,” said study lead author Svetlana Panina , a researcher at the University of Texas at Austin who conducted the research during her postdoctoral studies at Rice. “The results from our previously published cytotoxicity assay were helpful, but very little is known about these small-molecule compounds. None of them had been thoroughly described in other studies, and we had to essentially start from scratch to determine how much to use, what they do in cells, everything. All the doses and treatment conditions had to be adjusted by multiple preliminary experiments.”

In prior work, Kirienko’s lab had shown the eight compounds targeted energy-producing machinery inside cells called mitochondria. Dozens to thousands of mitochondria are at work every minute in every living cell, and like all machines, they wear out with use. The eight compounds induce mitophagy, the housekeeping routine cells use to decommission and recycle mitochondria that are past their prime.

During times of extreme stress, cells can temporarily forgo mitophagy to get an emergency energy boost. Cancer is notorious for hijacking these sorts of programs to fuel pathological growth. For example, previous research has shown leukemia cells have far more damaged mitochondria than healthy cells and are also more sensitive to mitochondrial damage than healthy cells.

Kirienko and Konopleva reasoned that mitophagy-inducing drugs might weaken leukemia cells and make them more susceptible to chemotherapy.

“We hypothesized that if they activate mitophagy, they may be particularly toxic to leukemia cells,” said Kirienko, the corresponding author of the new study. “And indeed, we found that six of the eight small-molecule compounds were deadly to leukemia cells. We then wanted to study them more in depth. So we looked at closely related molecules, and we looked at combinations.”

When two or more drugs are given in combination, researchers can also administer them individually and compare the effectiveness of each regimen.

“There is a number called synergy coefficient that quantifies interactions between drugs,” Kirienko said. “If the coefficient is negative, the drugs are antagonistic and work against one another. Zero means no effect, and positive numbers indicate positive interactions. Anything above 10 is considered synergistic.”

For example, one currently prescribed drug combination for leukemia — doxorubicin and cytarabine — has a synergy coefficient of 13, Kirienko said. The team’s experiments showed several mitophagy-inducing compounds were significantly more synergistic with doxorubicin. The most synergistic, a compound called PS127B, had a coefficient of 29.

The team started by testing the toxicity of its mitophagy-inducing compounds and combinations against acute myeloid leukemia (AML) cells, the most commonly diagnosed form of the disease. They then tested the six most effective AML-killing compounds against other forms of leukemia and found five were also effective at killing acute lymphoblastic leukemia (ALL) cells and chronic myelogenous leukemia (CML) cells. Control studies found all the mitophagy-inducing drugs caused far less harm to healthy cells.

In their final experiments, the researchers tested one of the most effective mitochondria-targeting compounds, PS127E, using a cutting-edge technique called a patient-derived xenograft (PDX) model. In PDX, also referred to as a “mouse clinical trial,” mice are implanted with cancer cells from a leukemia patient. Once the cells grow, the mouse is exposed to a drug or combination of drugs as a closer-than-cells test of the treatment’s effect. PDX tests on one compound, PS127E, showed it was effective at killing AML cells in mice.

“Although this is very promising, we’re still some distance from having a new treatment we can use in the clinic,” Kirienko said. “We still have a lot to discover. For example, we need to better understand how the drugs work in cells. We need to refine the dose we think would be best, and perhaps most importantly, we need to test on a wide variety of AML cancers. AML has a lot of variations, and we need to know which patients are most likely to benefit from this treatment and which are not. Only after we’ve done that work, which may take a few years, would we be able to start testing in humans.” 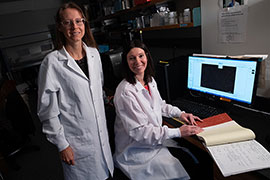 https://news-network.rice.edu/news/files/2022/06/0627_LEUKEMIA-nksp13-lg.jpg
CAPTION: Natasha Kirienko (left) and Svetlana Panina in Kirienko’s Rice University laboratory in 2019. Kirienko, associate professor of biosciences, and Panina, a former postdoctoral research associate in Kirienko’s lab, collaborated with researchers at the University of Texas MD Anderson Cancer Center to study potential new mitophagy-inducing drugs that could be paired with other chemotherapies to deliver a potent one-two punch to leukemia. (Photo by Jeff Fitlow/Rice University)