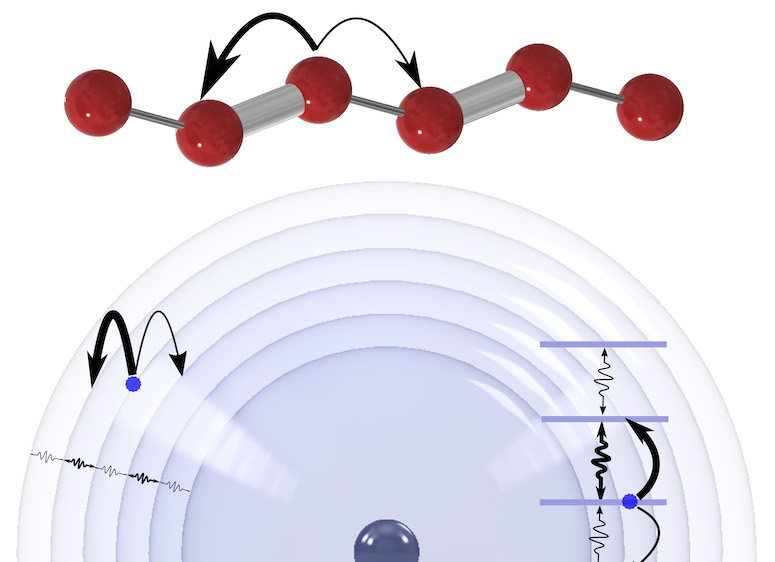 HOUSTON – (Feb. 21, 2022) – Our spatial sense doesn’t extend beyond the familiar three dimensions, but that doesn’t stop scientists from playing with whatever lies beyond.

The Rice team developed a technique to engineer the Rydberg states of ultracold strontium atoms by applying resonant microwave electric fields to couple many states together. A Rydberg state occurs when one electron in the atom is energetically bumped up to a highly excited state, supersizing its orbit to make the atom thousands of times larger than normal.

Ultracold Rydberg atoms are about a millionth of a degree above absolute zero. By precisely and flexibly manipulating the electron motion, Rice Quantum Initiative researchers coupled latticelike Rydberg levels in ways that simulate aspects of real materials. The techniques could also help realize systems that can’t be achieved in real three-dimensional space, creating a powerful new platform for quantum research.

Rice physicists Tom Killian, Barry Dunning and Kaden Hazzard, all members of the initiative, detailed the research along with lead author and graduate student Soumya Kanungo in a paper published in Nature Communications. The study built off previous work on Rydberg atoms that Killian and Dunning first explored in 2018.

Rydberg atoms possess many regularly spaced quantum energy levels, which can be coupled by microwaves that allow the highly excited electron to move from level to level. Dynamics in this “synthetic dimension” are mathematically equivalent to a particle moving between lattice sites in a real crystal.

“In a typical high school physics experiment, one can see light emission lines from atoms that correspond to transitions from one energy level to another,” said Hazzard, an associate professor of physics and astronomy who established the theoretical basis for the study in several previous papers. “One can even see this with a very primitive spectrometer: a prism!

“What is new here is that we think of each level as a location in space,” he said. “By sending in different wavelengths of light, we can couple levels. We can make the levels look like particles that just move around between locations in space.

“That’s hard to do with light -- or nanometer-wavelength electromagnetic radiation -- but we’re working with millimeter wavelengths, which makes it technically much easier to generate couplings,” Hazzard said.

“We can set up the interactions, the way particles move and capture all the important physics of a much more complicated system,” said Killian, a Rice professor of physics and astronomy and dean of the Wiess School of Natural Sciences.

“The really exciting thing will be when we bring multiple Rydberg atoms together to create interacting particles in this synthetic space,” he said. “With this, we’ll be able to do physics that we can’t simulate on a classic computer because it gets complicated very quickly.”

The researchers demonstrated their techniques by realizing a 1D lattice known as a Su-Schrieffer-Heeger system. To make it, they used lasers to cool strontium atoms and applied microwaves with alternating weak and strong couplings to create the proper synthetic landscape. A second set of lasers was used to excite atoms to the manifold of coupled, high-lying Rydberg states.

The experiment revealed how particles move through the 1D lattice or, in some cases, are frozen at the edges even though they have enough energy to move, Killian said. This relates to material properties that can be described in terms of topology.

“It is much easier to have control over coupling amplitudes when using millimeter waves to couple Rydberg atomic states,” Kanungo said. “When we achieve that 1D lattice, with all the couplings in place, we can try to see what dynamics would result from exciting a Rydberg electron into that synthetic space.”

“Using a quantum simulator is kind of like using a wind tunnel to isolate the small but important effects that you care about among the more complicated aerodynamics of a car or airplane,” Killian said. “This becomes important when the system is governed by quantum mechanics, where as soon as you get more than a couple of particles and a few degrees of freedom, it becomes complicated to describe what’s going on.

“Quantum simulators are one of the low-hanging fruits that people think will be early, useful tools to come out of investments in quantum information science,” he said, noting that this experiment combined techniques that are now fairly standard in labs that study atomic physics.

“All the technologies are well-established,” he said. “You could even conceive of this becoming almost a black box experiment that people could use, because the individual pieces are very robust.”

Co-authors of the paper are postdoctoral researcher Joseph Whalen and graduate students Yi Lu and Sohail Dasgupta of Rice, and graduate student Ming Yuan of Rice and the University of Chicago. Dunning is the Sam and Helen Worden Professor in the Department of Physics and Astronomy. 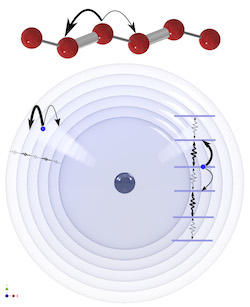 Rice University physicists created synthetic dimensions in atoms by forcing them into Rydberg states, supersizing electrons’ orbits to make the atoms thousands of times larger than normal. The researchers applied microwaves to couple adjacent energy levels and control how electrons tunnel through slow (thick line) and fast (thin line) barriers to create the dimensions. They expect the phenomenon will serve as an important tool in quantum simulations. (Credit: Illustration by Soumya Kanungo/Rice University) 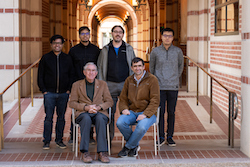 A team of physicists at Rice University has learned to manipulate electrons in gigantic Rydberg atoms with such precision they can create “synthetic dimensions.” From left, back row: Soumya Kanungo, Sohail Dasgupta, Kaden Hazzard and Yi Lu, and front, Barry Dunning and Tom Killian. (Credit: Jeff Fitlow/Rice University) 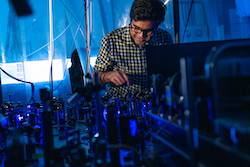 Rice University graduate student Soumya Kanungo works at a laser platform with the array of instruments he and a team used to manipulate electrons in Rydberg atoms to create “synthetic dimensions,” stand-ins for extra spatial dimensions that could be useful in quantum research. (Credit: Jeff Fitlow/Rice University)

Department of Physics and Astronomy: https://physics.rice.edu/