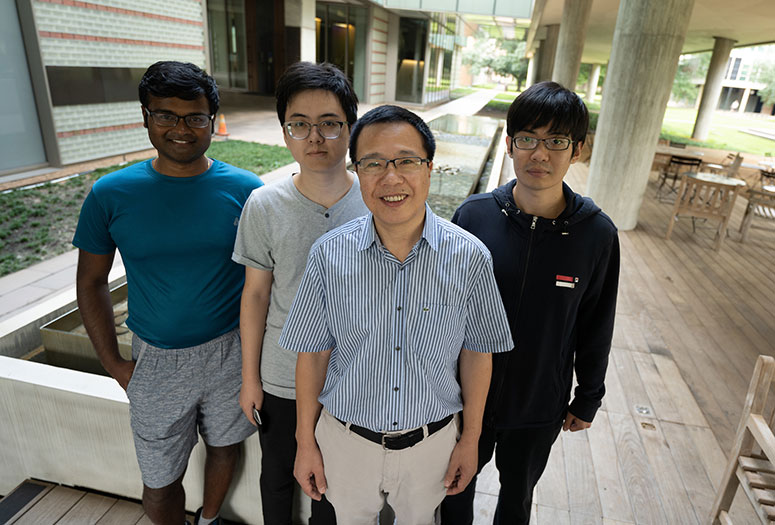 HOUSTON – (Sept. 15, 2022) – U.S. and European physicists have demonstrated a new method for predicting whether metallic compounds are likely to host topological states that arise from strong electron interactions.

The team includes scientists at Rice, TU Wien and Los Alamos who discovered the first strongly correlated topological semimetal in 2017. That system and others the new design principle seeks to identify are broadly sought by the quantum computing industry because topological states have immutable features that cannot be erased or lost to quantum decoherence.

“The landscape of strongly correlated topological matter is both large and largely uninvestigated,” said study co-author Qimiao Si, Rice’s Harry C. and Olga K. Wiess Professor of Physics and Astronomy. “We expect this work will help guide its exploration.”

In 2017, Si’s research group at Rice carried out a model study and found a surprising state of matter that hosted both topological character and a quintessential example of strong-correlation physics called the Kondo effect, an interaction between the magnetic moments of correlated electrons confined to atoms in a metal and the collective spins of billions of passing conduction electrons. Concurrently, an experimental team led by TU Wien’s Silke Paschen introduced a new material and reported that it had the same properties as those in the theoretical solution. The two teams named the strongly correlated state of matter a Weyl-Kondo semimetal. Si said crystalline symmetry played an important role in the studies, but the analysis stayed at the proof-of-principle level.

Strongly correlated quantum materials are those where the interactions of billions upon billions of electrons give rise to collective behaviors like unconventional superconductivity or electrons that behave as if they have more than 1,000 times their normal mass. Though physicists have studied topological materials for decades, they have only recently begun investigating topological metals that host strongly correlated interactions.

“Materials design is very hard in general, and designing strongly correlated materials is harder still,” said Si, a member of the Rice Quantum Initiative and director of the Rice Center for Quantum Materials (RCQM).

Si and Stony Brook’s Jennifer Cano led a group of theorists that developed a framework for identifying promising candidate materials by cross-referencing information in a database of known materials with the output of theoretical calculations based on realistic crystal structures. Using the method, the group identified the crystal structure and elemental composition of three materials that were likely candidates for hosting topological states arising from the Kondo effect.

“Since we developed the theory of topological quantum chemistry, it has been a longstanding goal to apply the formalism to strongly correlated materials,” said Cano, an assistant professor of physics and astronomy at Stony Brook and research scientist at the Flatiron Institute’s Center for Computational Quantum Physics. “Our work is the first step in that direction.”

Si said the predictive theoretical framework stemmed from a realization he and Cano had following an impromptu discussion session they organized between their respective working groups at the Aspen Center for Physics in 2018.

“What we postulated was that strongly correlated excitations are still subject to symmetry requirements,” he said. “Because of that, I can say a lot about the topology of a system without resorting to ab initio calculations that are often required but are particularly challenging for studying strongly correlated materials.”

To test the hypothesis, the theorists at Rice and Stony Brook carried out model studies for realistic crystalline symmetries. During the pandemic, the theoretical teams in Texas and New York had extensive virtual discussions with Paschen’s experimental group at TU Wien. The collaboration developed the design principle for correlated topological-semimetal materials with the same symmetries as used in the model studied. The utility of the design principle was demonstrated by Paschen’s team, which made one of the three identified compounds, tested it and verified that it hosted the predicted properties.

“All indications are that we have found a robust way to identify materials that have the features we want,” Si said.

https://news-network.rice.edu/news/files/2022/09/0915_TOPOSEMI-jc-lg.jpg
CAPTION: Jennifer Cano is an assistant professor of physics and astronomy at Stony Brook University and a research scientist at the Flatiron Institute’s Center for Computational Quantum Physics. (Photo courtesy of J. Cano/Stony Brook University)

Quantum criticality could be a boon for qubit designers – Aug. 23, 2019
https://news.rice.edu/2019/08/23/quantum-criticality-could-be-a-boon-for-qubit-designers/