An Owl’s-eye view of the Higgs boson at 10 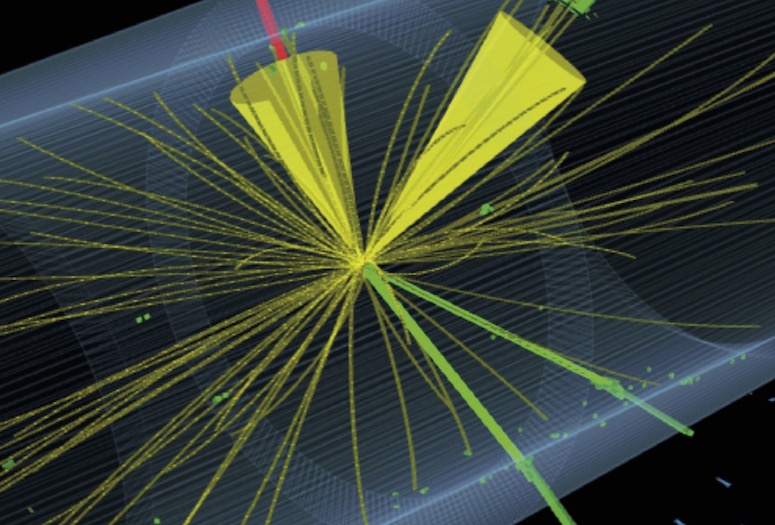 Rice University physicists will soon enjoy a brief moment of celebration upon the 10th anniversary of the Higgs boson discovery, announced on July 4, 2012.

They emphasize “brief,” because there’s so much to do.

Confirmation of the Higgs boson was a highlight of that holiday weekend in the United States and a cause to celebrate for physicists around the world. The Higgs gives other particles mass, and was the last predicted by the Standard Model of physics to be found.

Its discovery was only the end of the beginning of the search for new physics, according to Rice physicists. They and thousands of colleagues around the world continue to think about and build upon their work at the Large Hadron Collider (LHC), the proton-smashing, 17-mile ring at the border of France and Switzerland.

“We’re only scratching the surface,” explained Paul Padley, part of Rice’s long history with the LHC to reveal the most basic details of how the universe is constructed.

“We're studying Higgs properties to see if the particle that we discovered is really the Higgs the Standard Model predicted,” added Karl Ecklund. “So far we’re confirming that.”

Padley and his Rice colleagues are both analyzing data already gathered and preparing for future exploration as the collider’s operator, the European Organization for Nuclear Research, more commonly known as CERN, starts the collider’s third run after a lengthy shutdown for upgrades.

Rice took full advantage of the break to not only sort through data from the last run but also build components that are part of upgrading the Compact Muon Solenoid (CMS), a critical LHC experiment that looks for traces of exotic particles in the scattered remains of protons that collide at nearly lightspeed.

Padley, Ecklund, recent recruit Darin Acosta and Frank Geurts, all professors of physics and astronomy, and Wei Li, an associate professor, lead the Rice team of scientists and engineers who build advanced sensors and design software to sift the terabytes of data that emerge from the LHC every second. “We actually have to throw away 99.998% of the data,” said Acosta, who also leads Rice’s electronics and software initiative to sort and store the data. “It’s just too much volume, even by today’s standards.”

New components bound for CMS will aid in the search during the current and future runs, the weeks and months when the LHC is operational. They expect that future to extend to at least the late 2030s.

“We plan by the end of this decade to take data at a higher rate, by a factor of 10, and we’ll be able to do much more detailed studies,” Padley said. “That will be a petabyte of data a second.”

Avoiding the prospect of sorting through exabytes of “parked” data gives the team plenty of incentive to improve triggers that decide in real time what to keep and what to throw out. The Rice team contributes to the construction of detectors for the inner tracker, with thousands of them arrayed in shells around the center of the giant CMS where the beams collide and are triggered when they sense particles of interest.

“If you lose your keys under the lamppost, they’re easy to find,” Ecklund said. “But if they're in a shadow, it's a little bit harder. We’re smart enough to try the easy things first. Part of the reason for the High-Luminosity LHC (an upgrade planned for run 4 in 2027) and detector upgrades is to try to improve our ability to catch the rare things by shining a brighter light, or pointing a flashlight underneath the car.”

Finding the Higgs was one of many goals set out for the LHC and its first major success in 2012, when much of the Rice community pulled a holiday all-nighter to get the news firsthand. Acosta recalls watching at a more reasonable hour during a trip to California.

“But before that, I was actually at CERN,” he said. “I had just brought some graduate students (from his previous institution, the University of Florida) over to start their summer work, and I told them, ‘We should go to this important meeting; each analysis group on CMS is going to show what they found.’ It was the first time the collaboration saw each piece together.”

He recalled listening as the CMS teams came to the realization that all signs pointed toward the Higgs. “Collectively, the murmuring started building up: ‘Holy cow, we found it!’

“I told my students afterwards, ‘Remember this, because this will probably be the best meeting you’ll ever be in! If you were going to pick one, this was the one, because it’s all downhill from here!’”

“(Sheldon) Glashow, (Steven) Weinberg and (Abdus) Salam won the Nobel Prize for what's called the Standard Model of particle physics, in particular, electroweak theory, but for that theory to work, there had to be a Higgs boson,” Padley said. “So it would have been a surprise if we did not find it, but you can never take things for granted in science. You must test your theories with experiments.

“From that point going forward, the Higgs became a new tool for discovery,” he said. “It gives us another window to look for dark matter and other physics. And a lot of new physics models have more than one Higgs boson.”

He said great effort has gone into knowing the mass of the Higgs boson -- 125.35 plus or minus 0.15 giga-electron volts -- over the last decade. “Once we have that, its properties are pretty well defined,” Padley said. “And so we've been testing all those properties, like how often does it decay to this type of particle? How often to that sort of particle? How often does Higgs decay to muons? We've seen hints that it does, but we need more data.”

“The Higgs gives particles mass as it couples to itself and other particles,” Ecklund said. “What’s exciting is that we could see contributions from particles we haven’t discovered.”

He said there’s also discussion among U.S. physicists about whether the LHC’s successor should be a circular or linear collider, noting the latter could deliver particles at much higher energies “because you don’t have to bend them.”

“Even if we’re just bending them into a circle and their speed doesn’t change, we know from experience that particles radiate and we get X-rays and other radiation coming off the beams,” he said. “You lose energy as things slow down and you have to pump energy back in. That’s why the accelerator tunnel at CERN is so big.”

Acosta said the planned upgrades should reveal much more about the Higgs itself, eventually.

“Electromagnetic fields don’t self-interact, except in an indirect, quantum-mechanical way,” he said. “Light doesn’t necessarily scatter off of light.

“But the Higgs field can directly couple to itself,” he said. “So people are trying to look for production of multiple Higgs bosons in one collision, which is evidence of Higgs coupling. We need a lot of data to see that; we’re not yet at the sensitivity for what we predict the coupling to be. That will take the longer-term upgrade over the next 20 years.”

Padley is sure it will be worth the wait, and the work to get there.

“We’re all looking forward to at least a couple more decades of exciting science, building on the Higgs discovery,” he said.