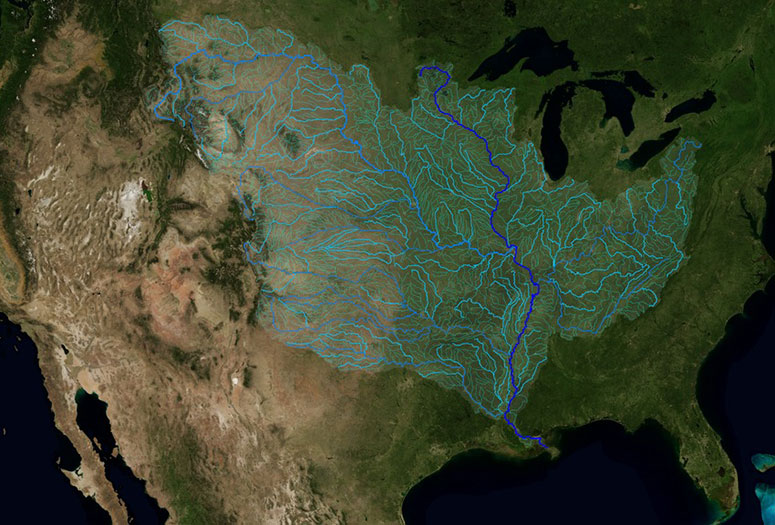 HOUSTON – (April 4, 2022) – A Rice University-led team of climate scientists and engineers is studying how climate change will impact the frequency and severity of flooding on the Mississippi River thanks to a new grant awarded by the National Science Foundation.

“The real question motivating our research is: How will climate change alter the frequency and magnitude of flooding on the river?” said Rice’s Sylvia Dee, the principal investigator on the three-year grant to her lab and those of co-principal investigators James Doss-Gollin at Rice and Samuel Muñoz at Northeastern University.

More than a quarter of the U.S. population lives within the Mississippi River watershed, an area larger than 1.2 million square miles that includes the drainage basins of tributaries like the Missouri, Ohio, Arkansas and Tennessee rivers.

Climate warming will promote both drought and intense rain, because warmer air that is dry will parch soil more quickly, increasing evaporation, but warmer air can also hold more moisture, leading to more extreme rainfall. Dee said uncertainty remains about which of these effects will dominate and when. And flood risk managers need that information to plan appropriately for the coming century.

“It's actually quite complicated because the basin is so large and there are multiple tributaries,” said Dee, an assistant professor of Earth, environmental and planetary science in Rice’s Wiess School of Natural Sciences. “You've got the Missouri in the west and the Ohio in the east, and they are generally experiencing very different weather patterns. It might be very dry over the Missouri and very wet over the Ohio. So to figure out if the Mississippi is going to flood more or less often, we have to understand the hydroclimate over all of the tributaries individually.”

She said the researchers will “look at the heterogeneity of the different tributaries” and gauge how each system will behave and contribute waterflow under possible climate futures.

Doss-Gollin, an assistant professor of civil and environmental engineering in Rice’s George R. Brown School of Engineering, said, “Some modeling studies have suggested that the drying effect dominates and others show that the precipitation effect dominates. To constrain this uncertainty, we need to look at data from the distant past.”

The team will compare its models with paleoclimate data from tree rings, sediments and other records of wet and dry periods in the past.

“The fundamental question is: Which effect will win, the increased evaporation and drying or the increase in extreme precipitation?” Dee said. “And the follow-up is: 'How will both of those changes, probably working together, affect the statistics of floods?’”

For example, the Missouri spans some of the northern Rockies, and “there's a lot of data suggesting the snowpack is going to be greatly reduced in a warmer climate,” she said. “Snow melt in the spring contributes a lot of water to the lower part of the Mississippi delta. So a reduced snowpack could really reduce discharge. But on the other side, we expect rainier conditions over much of the Northeast, including the Ohio River basin. If the Ohio gets wetter and the Missouri gets drier, what does that mean for flood control?”

The dikes, levees, locks and other infrastructure that control floods and keep trade moving on the Mississippi are a marvel of modern engineering. Dee said one of the research team’s primary goals is sharing what it learns with the U.S. Army Corps of Engineers, the agency that designs, builds and manages that infrastructure.

“We can run models until we're blue in the face, but what flood risk managers need to know is if those models are making projections that are accurate,” Dee said. “We talked extensively with collaborators at the Corps for this proposal. We drew from their reports about climate change and flood risk, and we talked to them about what they needed. We want to make sure the science we're doing is relevant to them.”

“Collaborative Research: Evaluating the Past and Future of Mississippi River Hydroclimatology to Constrain Risk via Integrated Climate Modeling, Observations, and Reconstructions”

An animation of the flows along the rivers of the Mississippi watershed.
(Image courtesy of NASA's Scientific Visualization Studio)

CAPTION: A map of the Mississippi River (dark blue) and its tributaries. (Image courtesy of NASA's Scientific Visualization Studio)