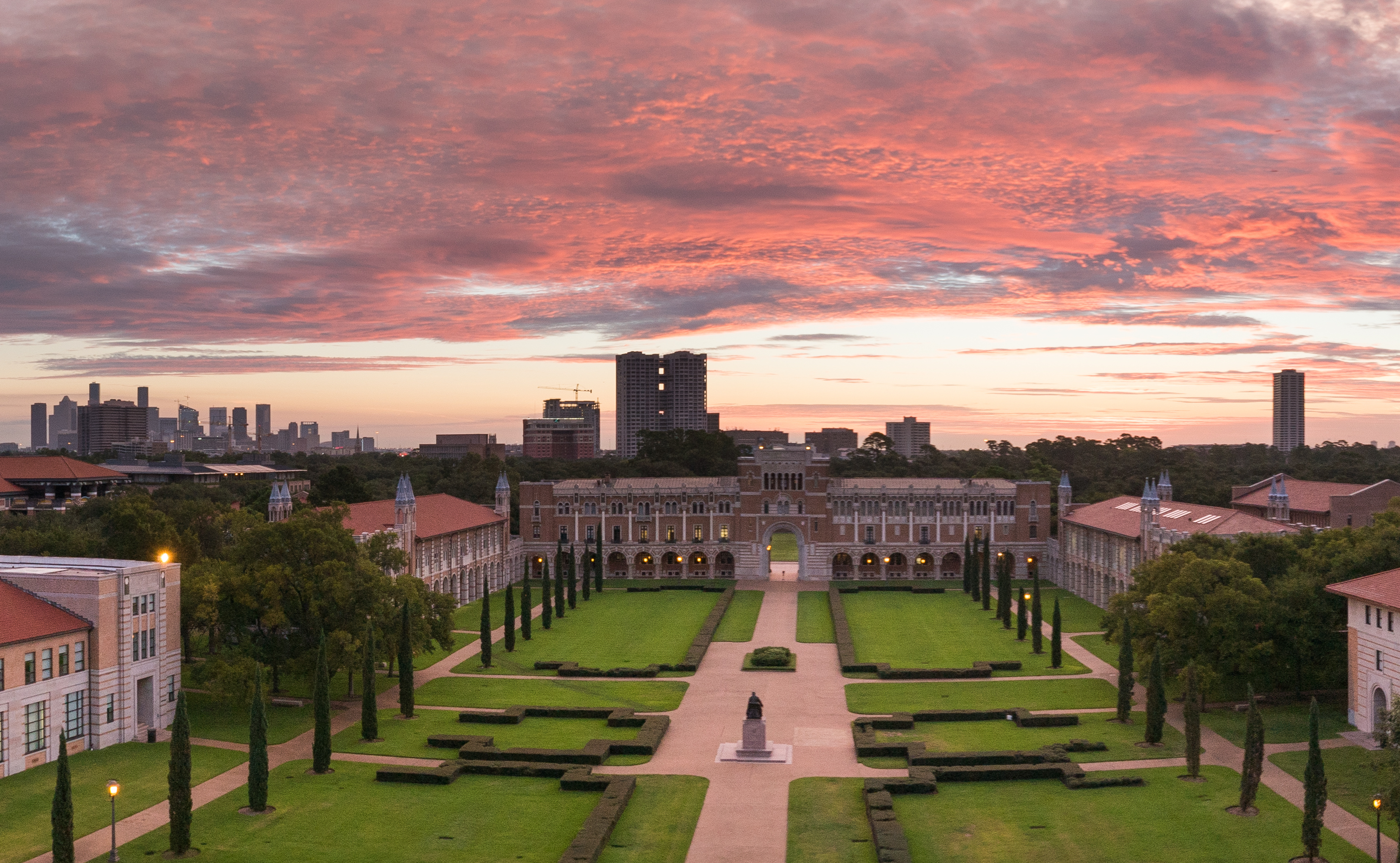 Update on Rice’s EarthCam: We received positive feedback on the livestream image of the Academic Quad, but we also heard from people who have concerns about it. In response, we decided to turn the camera off and leave it off until we have an opportunity to hear more from both those who have praised it and those who are concerned about it, which will allow us to better assess the situation.

Brandon Martin has been lucky enough to climb atop Fondren Library and bask in the breathtaking view of Lovett Hall, the Academic Quadrangle, the downtown Houston skyline and Hermann Park countless times during his decade-plus as Rice’s manager of videography. A few times over the years, he’s brought students working on video projects and a few select others to the top of Fondren so they can experience it for themselves.

“It’s always a joy to watch people’s reactions,” Martin said, “because it’s a place that almost nobody goes because you have to have special access.”

Now, this beautiful view of one of the most iconic sights in Houston is streaming online at all hours of the day and night, providing 24/7 video of Lovett Hall and the green landscaped grounds of what students affectionately call the Quad.

The video feed comes courtesy of a camera mounted atop Fondren linked to EarthCam, the leading network of livestreaming webcams deployed around the world. Television producers and meteorologists have already started using the shot during news and weather broadcasts, and anyone in the world who wants to take a gander can do so as well.

The live video can be found at https://www.rice.edu/earthcam.

Every morning, the camera shows the sun rising over the campus and Hermann Park. In the evening, the setting sun casts a warm glow on Lovett Hall’s red bricks made of clay excavated from Buffalo Bayou, the pink Texas granite trim and the gray Ozark marble incorporated in campus architecture. At night, the illuminated campus buildings are bathed in a golden glow.

“In the late afternoon, just before sunset, Lovett Hall to the east takes on a magical quality,” wrote John Boles, a retired Rice professor of history, who made a point of claiming an office directly below the spot where the live camera is now mounted.

Martin and others in the Rice community bandied about the idea of installing a permanent camera atop Fondren for years, but it was a chance encounter Martin had during a doctor’s appointment in August 2020 that finally put the project in motion.

“I was in a doctor’s office and I was watching The Weather Channel,” Martin said. “They were flipping through all these cameras, all over the country, taking weather shots. And I noticed that EarthCam was the camera, that was the logo.”

Martin reached out to EarthCam about a potential partnership to install one of their cameras on top of Fondren, sending along a few shots of some glorious sunrises and sunsets to entice the livestreaming company.

“They only had one other camera in Houston, over in the Galleria,” Martin said. “(So) they got super excited about it and said, ‘Hey, we want to partner with you.’” All in all, it took about five months from Martin’s first outreach to EarthCam to have the camera up and running.

Martin appreciates how media outlets across the globe will now be able to access a live feed of the gorgeous view he’s grown to love over the years. But he’s even happier that Rice alumni will now be able to check in on their alma mater with just the click of a button, and that prospective students might be enticed to apply to Rice after getting a taste of that “magical quality” Lovett Hall takes on when the light hits just right.

“I love epic things like the Golden Gate Bridge and the Eiffel Tower, those sort of things that places are known for,” Martin said. “For me, Rice and Lovett Hall are on that scale.”