A musical talent that shimmers 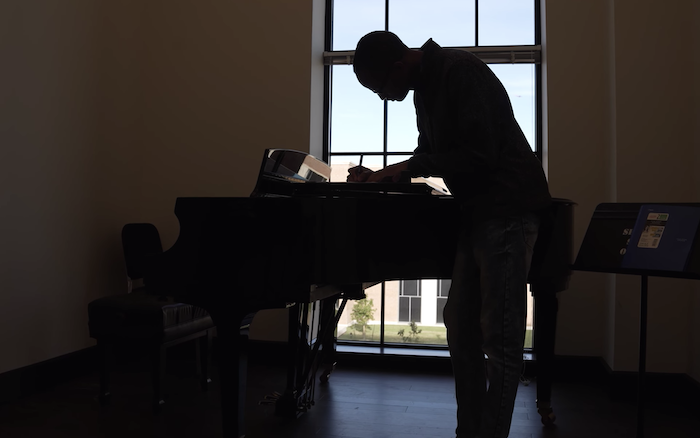 For many students, the focus of their first semester in college is on navigating a new chapter of their lives

But just a few months after matriculating at Rice, freshman composition student Jaylin Vinson had already created "Shimmer!," a dynamic cello quartet that debuted publicly as part of Moody Center for the Arts' New Art/New Music fall 2021 concert. The performances offer students an opportunity to compose and perform an original work that connects with new art on Rice’s campus.

Vinson, a student of Rice composition and theory professor Kurt Stallmann, created the piece early in his first semester. He was encouraged by fellow student Claire Druffner to write a piece that she and her "cello besties" (fellow freshmen Evan Nicholson, Maximus Gurath and Sebastian Berofsky) could perform.

Druffner said the piece sounds like it belongs in a motion picture score.

"It's very exciting, very movie soundtrack-like and evokes a lot of images, I think," Druffner said.

The quartet was coached by Rice professor of cello Norman Fischer. Vinson said he was inspired by artwork around campus and his fellow freshman performers when writing the piece.

"Their enthusiasm and their joy in wanting to create something with me, it's very emblematic of our friendship and our camaraderie," he said.

Vinson said working with only cellists made his writing process easier. Composing different parts for the same instrument allowed him to really consider each player, their abilities, their performance styles and individual personalities before coming up with the final piece.

"It made it much more fun and more personable," he said.

Vinson, who is originally from Oklahoma City, said music has always been part of his life, starting with the "sacred space" of church. He picked up violin and trumpet in sixth grade and quickly became interested in other instruments, including the viola and the cello.

"It was that curiosity that is a fundamental part of being a composer," Vinson said.

He said he feels fortunate that his creativity was nurtured by his high school music teachers, who gave him the opportunity to compose original works for their ensembles.

Vinson knew he wanted to attend Rice's Shepherd School at an early age. He said the university's diversity and the opportunity to engage with folks outside of music were the driving factors in his decision to attend.

"It's a great music school inside of a great university," he said. "I think why I wanted to be in a place like the Shepherd School at Rice University is the fact that I'm surrounded by people that are also curious. This is probably one of the only places where I can go down the hall and talk to someone that's interested in astrophysics and then also talk to someone that, you know, is doing stem cell research and someone that's interested in classics and philosophy.

So what's next? Vinson said he wants to keep himself open to any opportunities and new experiences that will come his way, but is especially interested in world diasporic music, specifically the African diaspora. His current work includes a piece that he plans to title "Exhale."

"It's my way of expressing what it's like to live as a Black person in America," he said.

The composition will utilize the last words of victims of police brutality while reflecting the need of individuals in society to take a deep breath, exhale and take time for themselves.

"This is kind of my passion project right now, and one that I'm looking forward to working on," he said.

Visit the Department of Composition and Music Theory at Rice's Shepherd School for more information.