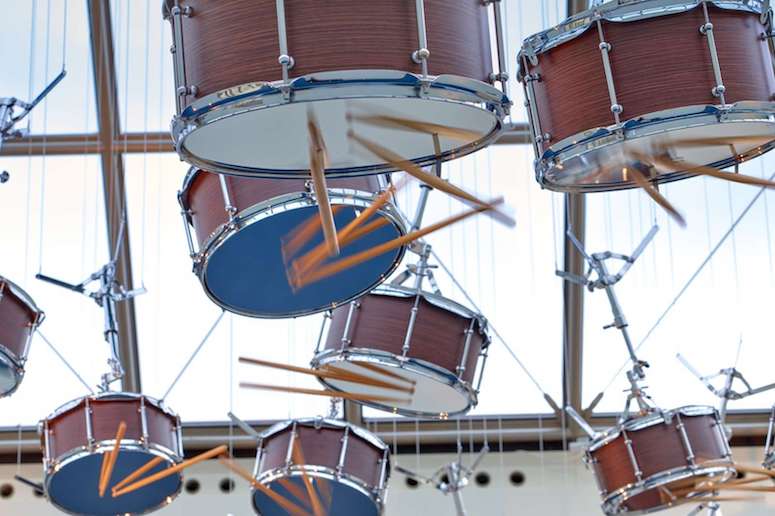 Nick Cave’s wearable works of art, “Soundsuits,” intentionally obscure the human inside, transforming a person into a colorful alien presence that makes curious noises with every shuffle and step. Anyone could be performing inside one of Cave’s “Soundsuits,” and that’s the point. First created in response to the 1992 beating death of Rodney King, they have since become iconic and iconoclastic forms of sculpture: instantly recognizable, shockingly beautiful, grounded in racial and cultural critique.

One of Cave’s “Soundsuits” will be among the works on view at the Moody Center for the Arts this spring in its newest exhibition. “Soundwaves: Experimental Strategies in Art + Music” runs from Jan. 21 to May 14 and kicks off a year of programming celebrating the Moody’s fifth anniversary as well as the 10th anniversary of James Turrell’s “Twilight Epiphany” Skyspace at Rice University.

“Soundwaves” celebrates the history of experimentation across the disciplines of art and music and pays homage to visual and performing artists who have demonstrated a deep engagement with the field of music. Although critics often divide visual art and music into discrete categories, the artists presented at the Moody operate in a fluid space between, finding fertile creative ground in the comingling of visual and sonic elements.

Spanning sculpture, audio, video, painting and performance, “Soundwaves” highlights experimental strategies in art and music made manifest in the work of living artists from around the world, including Nevin Aladağ, Raven Chacon, Jamal Cyrus, Spencer Finch, Idris Khan, Christine Sun Kim, Trevor Paglen, Anri Sala and Jorinde Voigt, among others. The exhibition will also be activated through a season of performances in the galleries and in the Moody’s black box theater.

Incorporating both visual and acoustic elements, the works on view explore the interconnectivity of these fields and the intersections between them, inviting visitors to engage all of their senses exploring a wide range of themes including perception, memory, the passage of time, our relationship to technology and the environment, and the struggle for racial justice and social change.

An opening reception for “Soundwaves” will be held at the Moody Jan. 28 from 6-8 p.m. The event is free and open to the public. Registration is encouraged.