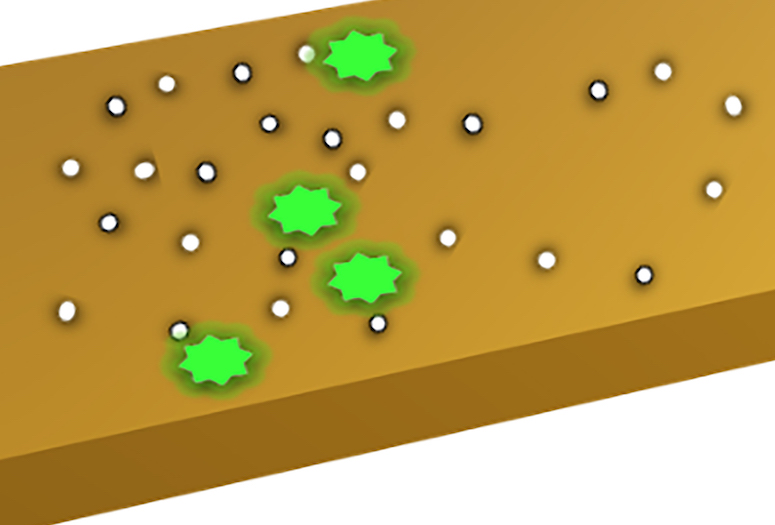 They’re not the physical kind. These quasiparticles, also known as electron holes, can be viewed as effective positive particles in the absence of negative electrons. And according to Rice University researchers, their action and propagation on heterogeneous catalyst particles allows the chemical reactions to happen.

The Rice lab of chemist Anatoly Kolomeisky and his colleague Professor Srabanti Chaudhury at the Indian Institute of Science Education and Research (IISER) Pune found through computational models that they might gain greater control over catalytic reactions by applying electric fields that prompt holes to migrate. That could lead to improvements in the ubiquitous process.

“Despite the fact that we’ve known about catalysis for 200 years -- it goes back to cellars in the 19th century -- we still don’t understand what’s happening on a catalyst,” said Kolomeisky, a professor and chair of Rice’s Department of Chemistry and a professor of chemical and biomolecular engineering. “But a couple of years ago I saw a series of intriguing papers from people at Cornell who were able to see co-catalytic cooperation involving positively charged particles.”

The Rice and IISER researchers set out to explain what the Cornell team saw, and found their theory matched the experiments. Their models show that holes are produced when a catalytic site activates and they then spread to adjacent sites, activating neighboring sites as well before recombining with electrons and dying.

The paper by Kolomeisky, Chaudhury and Bhawakshi Punia of IISER Pune appears in the Proceedings of the National Academy of Sciences.

Kolomeisky said the game-changing innovation by the Cornell team was in making the product of the catalyzed reactions they investigated to be fluorescent, so they could track them over time and space. “They realized to their surprise that if a reaction happens in one segment of a nanorod, it’s much more probable for the same reaction to happen on an adjacent segment. This cooperativity weakens down with distance, but it’s still surprising,” he said.

The new work suggests that each catalytic site on a nanorod probably makes positively charged holes during the redox chemical reaction that involves transfer of charged particles like electrons. As the local concentration of holes increases, they want to move to less-crowded areas. Where they settle, they trigger more catalysis and then die. The new catalytic site then makes more holes that further spread into neighboring regions.

“Our model is still highly speculative, because there is a clearly very complex underlying quantum mechanical phenomena here, and we don’t know what it is,” said Kolomeisky. “But our models quantitatively match the experiments. This should stimulate more investigations of these intriguing phenomena.

“If our theoretical predictions are valid, it will be possible to create an artificial density of holes in a controllable way, or create structures where holes might diffuse faster, and it might open a lot of channels for applications,” he said. “We might design new catalysts in the most efficient way.”

Positively charged holes that propagate at catalytic sites can spread out and trigger catalysis in neighboring sectors, according to a theory developed at Rice University and the Indian Institute of Science Education and Research, Pune. (Credit: Illustration by Bhawakshi Punia and Srabanti Chaudhury/IISER Pune)