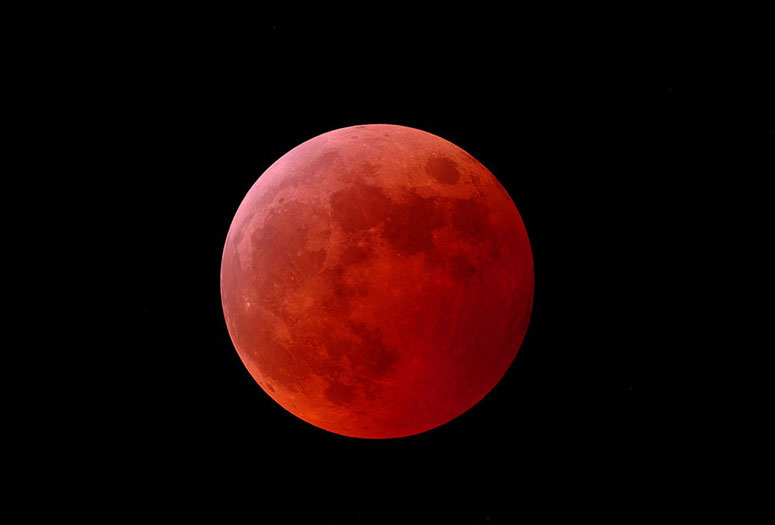 Weather permitting, the Rice University Campus Observatory will host a May 15 public viewing for a total lunar eclipse with a list of selling points skywatchers won’t see repeated for 28 years: almost an hour and half of “totality” at both a favorable hour of the evening and an ideal point in the moon’s orbit when it appears larger than normal.

“The easiest lunar eclipses to view are those where the entire moon passes through Earth’s shadow for an hour or more at a convenient time of evening,” said Rice astronomer Patrick Hartigan, who wrote about the eclipse on his blog. “The May 15 eclipse will have all that and something more. The moon will appear somewhat larger and brighter than normal because it will be near its closest approach to Earth.”

Hartigan will lead the public viewing at the observatory, which is located on the fourth floor of Brockman Hall for Physics. He’ll give an 8 p.m. talk about the eclipse in a classroom on the first floor. The observatory terrace will open for viewing at 9:30 p.m. and close at 12:30 a.m.

The partial phase of the eclipse will begin at 9:28 p.m. Central time, when the moon starts entering Earth’s shadow. The total phase, when the moon is fully in shadow, will last 85 minutes, from 10:29 p.m. until 11:54 p.m. Another partial phase will follow, with the moon fully emerging from shadow at 12:55 a.m.

Parking information and other details are available at the campus observatory webpage, and Hartigan advises checking the site for weather-related updates prior to coming to campus.

During the partial phase of the eclipse, the moon will look as if a bite has been taken out of it. During the total phase, it will have a dull or bright reddish-brown color “because sunlight from all the sunrises and sunsets on Earth are simultaneously visible on the lunar surface,” Hartigan said. “It’s a beautiful sight to behold as the moon slowly enters the shadow and then glows a ghostly red color during totality.”

The proximity of the moon to the Earth will be an additional visual perk for the May 15 eclipse, Hartigan said. The moon’s orbit is elliptical, and its distance from Earth can vary as much as 31,000 miles. When the moon is near perigee, the point in its orbit when it is nearest Earth, it appears about 6% larger in diameter and 13% brighter than an average full moon, he said.

Hartigan said viewers in North America will have to wait until the evening of Oct. 30, 2050, for another eclipse that meets all the favorable viewing criteria of the May 15 eclipse.

“We’ll actually have another total lunar eclipse this November, but it will occur in the pre-dawn hours in the U.S.,” Hartigan said. “If you relax the perigee constraint and just look for total lunar eclipses of reasonable duration that will be visible from the U.S. at a convenient hour, the next is in 2025 and there will be five more before the 2050 eclipse.”

And the last of those has something else going for it.

“Its total phase will start late on New Year’s Eve 2047 and end after midnight, meaning North America will ring in the new year in 2048 with a total eclipse of the moon,” Hartigan said.