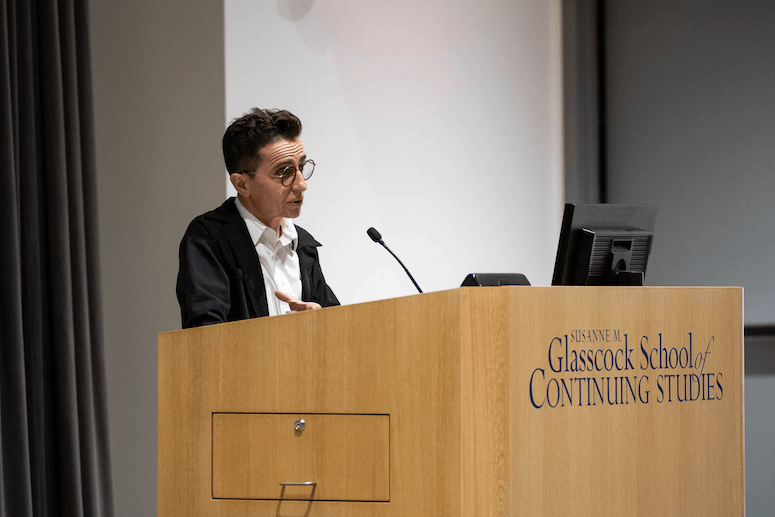 As voters went to the polls in the recent midterm elections, one of the nation’s most prominent Russian American journalists provided a campus audience a unique perspective on not only the war in Ukraine, but also how Russia’s experience with autocracy can offer Americans some insights about their own country.

The visit by the pioneering staff writer for The New Yorker was made possible by the School of Humanities Dean’s Office with generous support from the Campbell Foundation. This year’s lectures were held in person at Hudspeth Auditorium, while a virtual crowd of hundreds watched online via Zoom. Kathleen Canning, dean of humanities and the Andrew W. Mellon Professor of History, welcomed Gessen to campus and said the Rice community was “particularly appreciative of your willingness to spend time with us in Houston given the media’s likely demand on your time and expertise during these coming days.”

Gessen, who is transgender, nonbinary and uses the pronouns they and them, brought their wealth of experience gained from living through and observing Vladimir Putin’s yearslong march toward Russian totalitarianism to bear in discussing both the ongoing war in Ukraine and what Americans can learn from Russia’s descent into autocracy.

A recipe for conflict

For the first of their lectures, titled “How To Think About the War in Ukraine,” Gessen began by recounting — and dismissing — many of the ways people have tried to frame the conflict.

Some call it “a David vs. Goliath story, a fairy tale turned into a made-for-CNN action movie,” Gessen said, which “makes it too easy to forget that tens of millions of people have been terrorized, that millions have been displaced, that tens of thousands have been killed and that Ukraine hasn’t won yet.”

Others view the war as “a geopolitical battle between two great, though differently diminished, powers,” or as “Russia’s challenge to the hegemony of the West” — both far too simple, Gessen said.

Instead, “Here in Texas, on the eve of the [midterm] elections, and on the 257th day of Russia’s war in Ukraine, I want you to think about the war in Ukraine as a totalitarian war,” Gessen said.

As opposed to viewing totalitarians’ expressed ideology as rigid, Gessen echoed what Arendt learned from Nazi Germany, namely “that ideology is often a concoction of ideas picked up on the fly, tested spontaneously on audiences and adopted if they seem to work, and then dropped equally easily when they seem to lose traction.”

That explains Putin’s oft-shifting public justifications for his waging of the war to begin with, Gessen said: “This is an essential structural feature of totalitarianism, because its second pillar is terror. And terror has to be nonsensical.”

“The state of anxiety — the state of dread — is the state that totalitarianism wants you in at all times,” Gessen argued, because people in that state “are not capable of much … they’re not capable of creating solidarity in crafting protest and thinking about the future, which is really necessary to create any kind of new politics.”

Constructing totalitarian terror means defining enemies to be targeted by the state, and much like how ideological justifications for other totalitarian actions shift over time, Gessen said, so too does the definition of who is an enemy. “It could always move on to the next group, and there was always a sense that your neighbor could denounce you,” Gessen said, referencing similarities between Nazi Germany and today’s Russia.

Gessen also pointed to recent political developments in Texas, including the abortion law passed in 2021 that incentivized Texans to sue anyone suspected of performing or aiding an abortion after six weeks of pregnancy, as examples of “horizontal enforcement,” a tool regimes use to pit people against their neighbors toward the end of supporting the state’s goals.

Gessen invoked Morgan Davis, a transgender man and former Texas Child Protective Services agent who resigned from the agency after he was ordered to investigate a family suspected of providing their transgender child with gender-affirming medical care. At first, Davis justified staying in his job, hoping he could at least more compassionately work with the family than another agent might. But eventually, Davis resigned, rendering him isolated and alone.

“I’ve been obsessively thinking about Texas … because I think that Texas has turned into a laboratory of totalitarianism in the United States,” Gessen argued.

“You can’t feel terrorized by the state if the family is in any way protected. And the genius of both German, but in particular, of Soviet totalitarianism was in inventing ways to insert the state into the family in all kinds of ways that made it completely inconceivable that anybody was protected in any kind of private space,” Gessen said.

“And then, what does Russian terror look like? It first looked like gradual suppression of the media,” Gessen said, starting with state takeover of television stations, then newspapers, magazines, radio stations and eventually online media. “By the time the full-scale war in Ukraine began in February, there was almost nothing left.”

In that type of environment, anybody not inclined to support the totalitarian regime quickly becomes isolated; in this case, perhaps Russians start worrying about what their children might say at school that could be interpreted as evidence of dissidence, or they may choose to stop speaking with family members more sympathetic to the regime out of fear that their association may subject them to government scrutiny and violence.

In many cases, such as transgender Texan CPS worker Davis’s initial attempts to comply with his department’s directives, “[Sometimes] you start doing the state’s bidding, sometimes of your own volition, sometimes against your own will,” Gessen said.

Gessen concluded by making the case that the best way to think about the war in Ukraine — a nation with its own long history of surviving through similar pressures during Soviet rule, and later proudly breaking free of those strictures — is as “a totalitarian war against an anti-totalitarian society.”

“Much of [Putin’s] ideology boils down to saying ‘history is destiny: This is how we are going to live forever, and I assert our right to live this way,’” Gessen said. “And Ukraine has said ‘history is not destiny.’”

For their second lecture, “On Surviving Autocracy” — given on Election Day — Gessen drew from their vast well of experience analyzing autocratic regimes to provide a few pieces of advice for Americans concerned that their country might be moving closer to being ruled by one.

Gessen recounted how the idea for an opinion piece articulating “ Autocracy Rules for Survival” sprung to mind as they were biking home the night of the 2016 presidential election, inspired by Donald Trump’s victory.

Gessen said they originally authored their rules as a response to their fears about institutional normalization and rationalization of many of Trump’s actions, which could be characterized as unconventional at best and autocratic at worst.

Gessen’s first rule? “Believe the autocrat — he means what he says, and whenever you find yourself thinking, or hear others claiming that he’s exaggerating, that’s our innate tendency to reach for rationalization … we want to think that it’s not really as bad as we can tell it is.”

As an example, Gessen highlighted coverage in The New York Times in the 1930s that “assured its readers that Hitler’s antisemitism was all posture,” and the paper’s coverage of Putin in years past that Gessen felt selectively focused on his least inflammatory proclamations.

Gessen highlighted their second rule, “not to be taken in by small signs of normality,” in terms of how they actually broke it themself by growing temporarily optimistic when Trump nominated Neil Gorsuch — considered to represent the mainstream of conservative judicial thought rather than right-wing radicalism — to the U.S. Supreme Court. Gessen explained how they viewed Trump’s subsequent Supreme Court appointments, as well as the transformation of the federal judiciary through a tidal wave of appointments, as proof that their optimism was misplaced.

That segued to Gessen’s next rule: remembering that “institutions will not save you,” given that so many American political institutions “are enshrined in political culture rather than law. And all of them, including the ones enshrined in law, depend on the good faith of all actors to fulfill their purpose and uphold the Constitution.”

Gessen pointed to Trump’s travel bans targeting predominantly Muslim countries. “When people were protesting all over the country when Trump’s travel ban 1.0 [was enacted], federal courts acted very fast around the country,” Gessen said. “[But] months later, travel ban 2.0 and then 3.0 did not elicit that kind of reaction and were ultimately allowed to stand.”

As a companion of sorts to the rule to stay wary of a false sense of normality, Gessen outlined the importance of maintaining one’s capacity for outrage. Their final two rules — “don’t make compromises” and “remember the future” — were offered up with a few tweaks based on what they learned during Trump’s presidency.

Gessen proposed that a more realistic adaptation of their rule to not make compromises with autocratic leaders would be “to pay attention to the ways in which this political period breaks your moral compass,” acknowledging that some government officials felt morally justified in aligning themselves with a Trump administration Gessen considered immoral out of those officials’ sense of civic duty.

Gessen’s original rule to “remember the future,” they explained, meant that opponents of purported autocrats shouldn’t enact any sweeping institutional changes to how their governments operate, with the example of calls by some of Trump’s harshest critics to disregard the electoral college outcome in 2016 altogether in an attempt to hand Clinton the presidency.

“You can’t do anything that you’re not willing to live with for decades after,” Gessen argued.

The amendment Gessen proposed — that we should “remember the future and the past” — arose from what Gessen felt was “our collective failure to reckon with a lot of recent history.” Gessen invoked the insurrection in the nation’s Capitol on Jan. 6, 2021: “There’s no better illustration of the rules,” and particularly the pitfalls of not abiding by them.

Gessen concluded, however, that there is still plenty to admire about America that can be preserved if people are willing to stay vigilant.

“Those are things that can and will be lost if this country becomes an autocracy, but we have them right now,” they continued. “It is our moral duty to use them, and to use them urgently.”