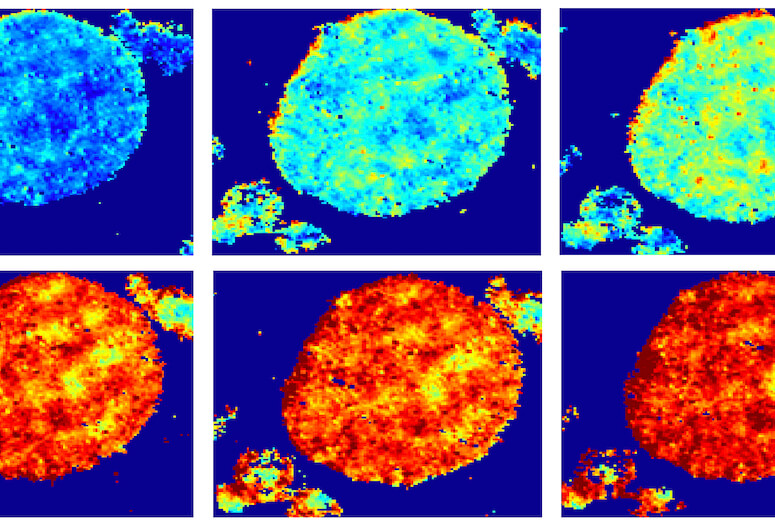 HOUSTON – (April 18, 2022) – If you could shrink enough for a fantastic voyage across a lithium battery electrode, you’d see the level of charge at every scale is highly uneven.

This is not good for the battery’s health. Rice University researchers who recognize the problem worked with the Department of Energy to view in great detail how the various particles in an electrode interact with lithium during use.

Their paper in the American Chemical Society journal ACS Energy Letters supports theories Tang and his colleagues formed several years ago that foresaw how lithium travels in the dynamic environment inside a typical commercial cathode.

“Batteries have a lot of particle aggregates that soak up and give up lithium, and we wanted to know what happens on their surfaces, how uniform the reaction is,” said Tang, an associate professor of materials science and nanoengineering. “In general, we always want a more uniform reaction so we can charge the battery faster.”

In images taken at Brookhaven’s powerful X-ray synchrotron, the researchers saw some regions inside the cathode were better at absorption than others. The ability to look at single or aggregated particles in 3D showed that rather than reacting over their entire surfaces, lithium favored particular regions over others.

“This is very different from conventional wisdom,” Tang said. “The most interesting observation is that these reaction regions are shaped like one-dimensional filaments lying across the surface of these aggregated particles. It was kind of weird, but it matched what we saw in our models.”

Tang said the lithium filaments looked something like thick nanotubes and were several hundred nanometers wide and several microns long.

He said stress between misaligned crystallites in the particle agglomerates prevents lithium from being uniformly inserted into or extracted from the aggregate surface because that will generate too large an energy penalty. Instead, lithium is forced to flow into or out of the aggregates at “hot spots” that develop the filament shape.

What does this mean for battery performance?

“This is a bad thing,” Tang said. “Because the lithium can’t go into the cathode uniformly, it slows down the intercalation mechanics.

“What our study offers is some potential ways to help make lithium insertion or extraction more uniform on these aggregates or individual particles,” he said. “Introducing some porosity in the particle agglomerates might sacrifice some energy density, but at the same time would allow lithium to go in more uniformly. That could allow you to get more energy at a given charge/discharge rate.

“Another thought is if we can somehow align the orientation of these small particles so their maximum expansion is perpendicular to each other, they’ll better accommodate lithium intercalation,” he said.

That would be a challenge for battery manufacturers, he admitted.

“We don’t have enough experience in synthesis to know how to make that happen,” Tang said. “What we’re providing is bait. Let’s see if somebody bites.”

A phase map of an agglomerated particle in a common lithium iron phosphate (LFP) battery electrode shows the charge distribution as it goes from 4% to 86%. FP refers to iron phosphate. Rice University scientists found that the FP phase spreads nonuniformly on an aggregate surface upon charging, rather than the expected even spread of lithium over the surface. The scale bar is 10 microns. (Credit: Mesoscale Materials Science Group/Rice University) 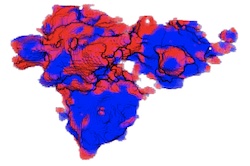