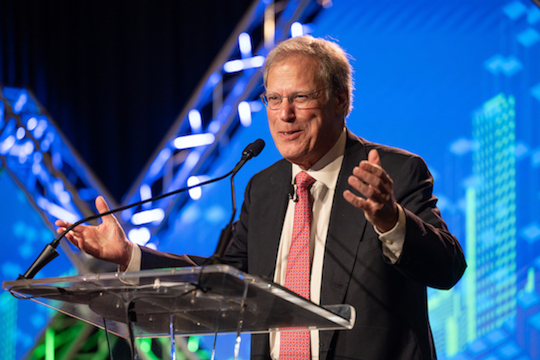 As Houston emerges from the COVID-19 pandemic, the economy and crime top the list of residents’ concerns in the 2022 Kinder Houston Area Survey. Stress, anxiety, loneliness and isolation persist as the pandemic wanes, the survey shows, and Houstonians want the government to spend more money addressing economic inequalities and improving public schools.

This is the last year Klineberg will be directly involved in the survey he launched four decades ago.

“I’m deeply appreciative for the support and encouragement I have received from so many friends and colleagues over the years,” Klineberg said. “I’m also grateful for the opportunity to track systematically the transformations of this remarkable city, to share the survey findings with the wider community and to know that the work will continue into the next 40 years of the Houston story.”

Economic concerns — identified by 28% of survey respondents as the biggest problem facing people in the Houston area — were the highest priority for residents this year, up from 20% last year. Crime came in a close second at 25% (up from 14%), COVID-19/public health was next at 15% (down from 25% in 2021), and traffic congestion followed at 12% (down from 42% in 2019, the last representative year because of the impact of the pandemic).

Thirty-six percent of respondents reported that their financial situation has gotten better (up from 21% last year). But the lowest percentage of respondents ever — 50% — said they expected to be better off three or four years down the road.

Twenty-nine percent of respondents said they would have trouble coming up with $400 in an emergency. There was a significant disparity based on race/ethnicity, with 47% of Blacks and 40% of Hispanics indicating they would not be able to come up with that kind of money, compared with 13% of whites and 20% of Asians.

Twenty-three percent of respondents said they were unable to make at least one rent or mortgage payment during the past year. Again, the survey showed a significant disparity based on race, with 39% of Blacks and 28% of Hispanics saying they had problems covering their housing costs in the last year, compared with 9% of whites and 8% of Asians.

People in the Houston area are still feeling the impact of COVID-19: 76% reported increased stress and anxiety, and 57% acknowledged deeper feelings of loneliness and isolation since the beginning of the pandemic. Nearly half — 46% — said they were not getting enough quality sleep, and 45% said they were not able to get as much exercise as they had before the pandemic.

“These numbers are a reminder that, in addition to the direct medical impacts of the virus itself, there were profound and pervasive effects on the overall health and well-being of the broader Houston population,” the report read.

In light of the Supreme Court’s forthcoming decision on Roe v. Wade, 64% of Houstonians expressed support for a woman’s right to choose an abortion “if she wants one for any reason,” and 92% support that right if the woman’s health is seriously endangered. The partisan divide is deep — 81% of Democrats and 33% of Republicans say abortion for any reason should be legal.

Trust in core American institutions is low across the board, especially the news media and Congress, at just 9% and 5%, respectively. Organized religion came in next at 13%, followed by public education at 14%, banks at 15%, the Supreme Court at 18%, the office of the president at 19% and the military at 34%. The scientific and medical community garnered the highest percentage expressing confidence, 54%.

This year’s survey reflected a continuing drop in the belief that minorities have the same opportunities as whites.

The number of non-Hispanic whites who agree with that sentiment fell from 64% in the 2020 survey to 49% in 2022; the percentage dropped from 66% to 43% among Hispanics, and from 29% to 17% among Blacks. “For the first time over the years of the surveys, majorities in all three of Houston’s largest ethnic communities now agree in acknowledging the racial inequities in access to economic opportunity in American society today,” according to the report.

The survey also found that Houston area residents recognize more clearly than before that people can fall into poverty through no fault of their own. Seventy-nine percent of respondents said government should see to it that everyone who wants to work can find a job, and 77% said there should be federal health insurance to cover the medical costs of all Americans. Sixty-nine percent believe most people who receive welfare payments are really in need of help.

This year’s survey also recorded a striking rise in support for providing significantly more money to public schools. The percentage of those calling for more funding has jumped from 41% in 1995 to 59% in 2018 and 67% in this year’s survey.

Moreover, 63% of area residents want to raise local taxes to pay for universal preschool for all children in Houston.

Klineberg believes these findings highlight the opportunity to provide more significant investments in the city’s future. After following the evolution of public opinion in the Houston area for four decades, he’s convinced tracking the evolution of residents’ perspectives will continue to be valuable in the years ahead.

“And it will be especially important,” the report concludes, “to find ways to translate that evolving understanding into sustained and effective action.”