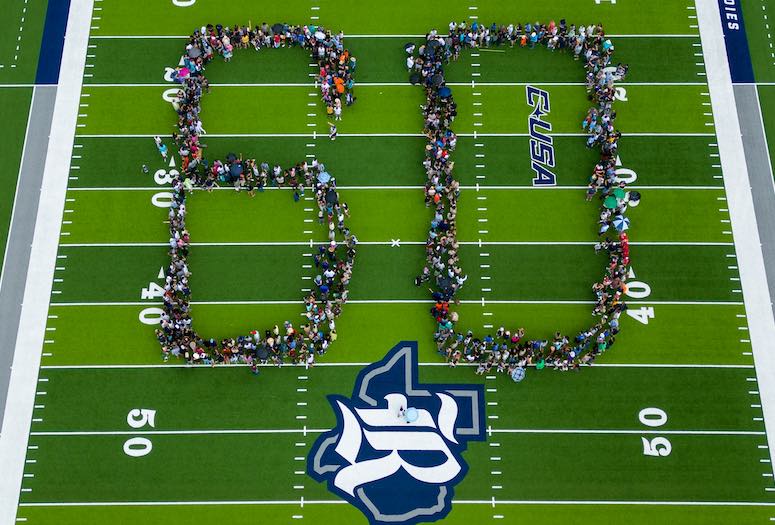 Hundreds of space fans (spans?) poured into Rice Stadium for a space selfie (Spelfie!) at high noon on Sept. 10 during the university’s celebration of the 60th anniversary of President John F. Kennedy’s “We go to the moon” speech.

The crowd drifted down from the shady stands to the field and took the form of a giant “60” as a satellite passing overhead zoomed in from orbit for a shot of the one-time tableaux. The abundant clouds may or may not have cooperated – we’ll know when the picture arrives – but the occasion was no less special.

“It was a lot of work to get to this point, and I’m a bit worried about the cloud cover, but I think everybody was excited about it,” said David Alexander, a professor of physics and astronomy and director of the Rice Space Institute. “It’s been a good start to the weekend.”

The photo op launched the three-day event at Rice to both commemorate the famous speech, the public kickoff of the space race, and to talk about the future of space travel, with NASA’s impending journey back to the moon aboard Artemis.

Those who came early or stayed late also attended indoor exhibits by NASA and Rice that honored the history while describing imminent plans to return to the moon and then travel on to Mars.

Both the moon and planet were represented by giant balloons in the NASA tent. Also present were a full-sized rover like those bound for deployment on other worlds, a Valkyrie robot for Earth- and planet-bound missions, a mockup of a smaller moon rover and several exhibits detailing the science that goes into spaceflight, including the on-the-pad Space Launch System due to carry an unmanned Artemis capsule to the moon -- hopefully later this month.

The NASA tent delighted families and children with posters and other swag galore, and plenty of indoor photo ops, no satellite needed.

Next to the NASA exhibits, Rice’s Robert L. Waltrip Training Center hosted dozens of students and faculty demonstrating their contributions to the future of spaceflight, including stations featuring Mars geology, the Mechatronics and Haptic Interfaces Lab, the student rocketry team Rice Eclipse, the Oshman Engineering Design Kitchen and many of NASA’s industry contractors.

The event is free to everyone (including parking) and no invitation is necessary. The pre-show begins at 10:30 a.m.

Full details are available at https://www.rice.edu/jfk60.