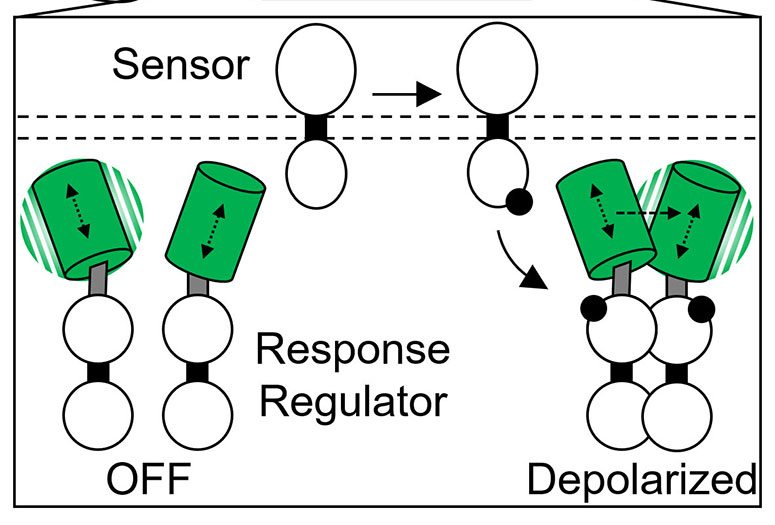 HOUSTON – (Aug. 25, 2022) – Synthetic biologists at Rice University have developed the first technology for observing the real-time activity of some of most common signal-processing circuits in bacteria, including deadly pathogens that use the circuits to increase their virulence as well as to develop antibiotic drug resistance.

Two-component systems are sensory circuits bacteria use to react to their surroundings and survive. Bacteria use the circuits, which are also known as signal transduction pathways, to sense an “unrivaled range of stimuli” from light and metal ions to pH and even messages from their friends and neighbors, said Rice bioengineering professor Jeffrey Tabor.

Tabor and postdoctoral researcher Ryan Butcher’s new optical tool for observing real-time phosphorylation reactions in two-component systems is described in a study published this week in the Proceedings of the National Academy of Sciences.

“Bacteria use two-component systems to activate virulence and antibiotic resistance, colonize human and plant hosts, form biofilms and foul medical devices,” said Tabor, a professor of both bioengineering and biosciences.

Tabor’s laboratory has studied two-component systems for years. In 2019, his team unveiled a biohacking toolkit that synthetic biologists could use to mix and match tens of thousands of sensory inputs and genetic outputs from the circuits.

One of the most important uses of that toolkit was unlocking the dual mystery of two-component systems. As their name implies, the circuits have two functions: sensing a stimulus outside the cell, and changing the cell’s behavior in response to that stimulus.

The first component, known as a sensor kinase, typically protrudes through the cell’s outer wall and can only be activated by a specific chemical signal. Once triggered, it sets off a biochemical cascade, a chain reaction inside the cell that ends with the cell changing its behavior in response to the stimuli.

The first step in the cascade is a process called phosphorylation, which ultimately results in activation of the second component of the system, the response regulator.

Though phosphorylation reactions are key in the tens of thousands of two-component systems employed in bacteria, it has been very difficult to directly observe them in live bacteria. That is partly because response regulators must typically join to form pairs to carry on the biological cascade that leads to stimulus response.

Butcher created a much simpler method that uses fluorescent protein tags and polarized fluorescent light. He engineered strains of E. coli to produce mNeonGreen fluorescent protein probes that depolarize light from an excitation laser, but only if they interact as pairs. In a variety of tests, Butcher and Tabor showed their method could be used to monitor the magnitude and speed of response regulator activation under a variety of environmental conditions.

The method is called “homotypic fluorescence resonance energy transfer,” or homo-FRET for short. Tabor said researchers can use it to follow the activation of two-component systems with much higher time resolution than previously possible.

In the study, he and Butcher demonstrated the utility of homo-FRET by observing a nitrate-activated two-component system that’s known to play a role in gastrointestinal colonization by E. coli, Salmonella and other pathogens.

“Microbiologists have known for some time that this genetic circuit is used by a number of pathogens, but we still don’t fully understand how it works,” Tabor said.

Using their method, Tabor and Butcher discovered a previously unreported pulse of activity in the circuit in response to adding nitrate. The pulse appears to arise due to rapid activation of the two-component system followed by consumption of nitrate by the bacteria and corresponding deactivation.

“That’s a window into how this circuit works, and it’s the kind of thing that would have been much more difficult to pin down using previous methods,” Tabor said. “With homo-FRET we can watch the circuit respond to changing nitrate levels as it’s happening”.

“We think homo-FRET can be used to engineer biosensors that respond 10 times faster than current alternatives, and that we and others will be able to use it to make new discoveries in a range of other bacterial pathways,” he said.