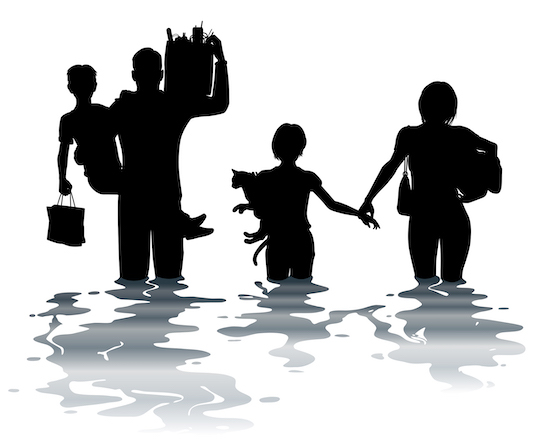 Thomas Marlow, a postdoctoral fellow at NYU Abu Dhabi, said industrial activity has not only contributed to climate change, but also left behind enormous amounts of land-based contamination that will continue to put people at risk when floodwaters rise. Marlow is the lead author of “ Future Flooding Increases Unequal Exposure Risks to Relic Industrial Pollution ,” published today in Environmental Research Letters.

“We wanted to investigate where those dynamics will affect different communities in the years ahead,” he said.

The scholars focused on six different U.S. cities (Houston; Philadelphia; Minneapolis; Portland, Oregon; New Orleans; and Providence, Rhode Island), combining historical data on former hazardous manufacturing facilities with future flood risks projected down to the address level. They found that more than 6,000 former industrial sites likely still to be sources of significant ground pollution are at elevated flood risk over the next 30 years. These sites are disproportionately located in lower-income communities of color.

“We found that the sites of highest concern cluster and create zones of increasing risk in areas where more than 560,000 residents currently live,” said Jim Elliott, professor and chair of sociology at Rice. “Analyses further indicate that racial minorities, those with lower incomes and those residing in multiunit housing disproportionately live in these areas, regardless of the city in question.”

“Specifically, we need to rethink site-based strategies for cleaning up urban lands polluted by past industrial activities,” he said. “This work must engage and include residents of historically marginalized communities in planning efforts as government agencies at all levels work to make their cities more resilient and environmentally just in the age of climate change.”

“The good news is that if we act now, we can not only tackle the problem but also help build more just and resilient cities,” Elliott concluded.

The researchers plan to build on this work by assisting local for-profit and nonprofit organizations to address the challenges of urban flooding.