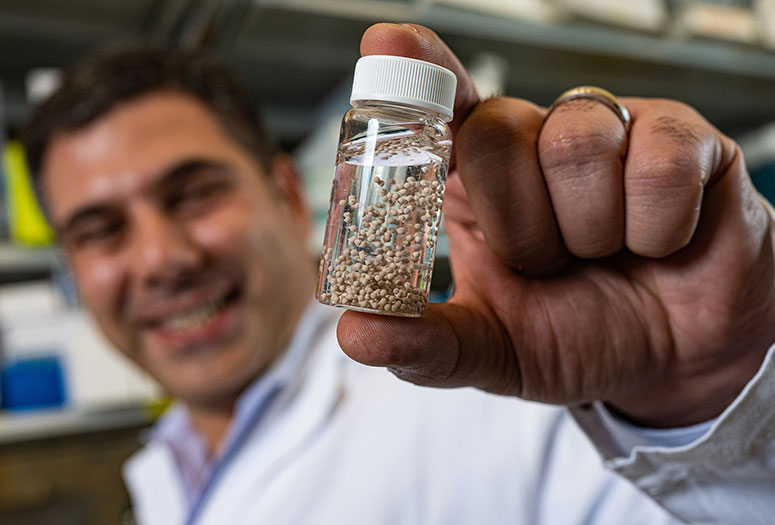 HOUSTON – (March 2, 2022) – Rice University bioengineers have shown they can eradicate advanced-stage ovarian and colorectal cancer in mice in as little as six days with a treatment that could be ready for human clinical trials later this year.

The researchers used implantable “drug factories” the size of a pinhead to deliver continuous, high doses of interleukin-2, a natural compound that activates white blood cells to fight cancer. The drug-producing beads can be implanted with minimally invasive surgery. Each contains cells engineered to produce interleukin-2 that are encased in a protective shell.

The treatment and animal test results are described online today in a Science Advances study co-authored byOmid Veiseh, Amanda Nash and colleagues from Rice, the University of Texas MD Anderson Cancer Center, the University of Virginia and others.

Veiseh, an assistant professor of bioengineering whose lab produced the treatment, said human clinical trials could begin as soon as this fall because one of his team’s key design criteria was helping cancer patients as quickly as possible. The team chose only components that had previously proven safe for use in humans, and it has demonstrated the safety of the new treatment in multiple tests.

“We just administer once, but the drug factories keep making the dose every day, where it’s needed until the cancer is eliminated,” Veiseh said. “Once we determined the correct dose — how many factories we needed — we were able to eradicate tumors in 100% of animals with ovarian cancer and in seven of eight animals with colorectal cancer.”

In the newly published study, researchers placed drug-producing beads beside tumors and within the peritoneum, a sac-like lining that supports intestines, ovaries and other abdominal organs. Placement within this cavity concentrated interleukin-2 within tumors and limited exposure elsewhere.

“A major challenge in the field of immunotherapy is to increase tumor inflammation and anti-tumor immunity while avoiding systemic side effects of cytokines and other pro-inflammatory drugs,” said study co-author Dr. Amir Jazaeri, professor of gynecologic oncology and reproductive medicine at MD Anderson. “In this study, we demonstrated that the ‘drug factories’ allow regulatable local administration of interleukin-2 and eradication of tumor in several mouse models, which is very exciting. This provides a strong rationale for clinical testing.”

Interleukin-2 is a cytokine, a protein the immune system uses to recognize and fight disease. It is an FDA-approved cancer treatment, but Nash, a graduate student in Veiseh’s group and the study’s lead author, said the drug factories provoke a stronger immune response than existing interleukin-2 treatment regimens because the beads deliver higher concentrations of the protein directly to tumors.

“If you gave the same concentration of the protein through an IV pump, it would be extremely toxic,” Nash said. “With the drug factories, the concentration we see elsewhere in the body, away from the tumor site, is actually lower than what patients have to tolerate with IV treatments. The high concentration is only at the tumor site.”

Nash said the same general approach used in the study could be applied to treat cancers of the pancreas, liver, lungs and other organs. The drug factories could be placed next to tumors and within the linings that surround those organs and most others, she said. And if a different cytokine is needed to target a specific form of cancer, the beads can be loaded with engineered cells that make that immunotherapeutic compound.

The bead’s outer shell shields its cytokine-producing cells from immune attacks. The shells are made of materials the immune system recognizes as foreign objects but not as immediate threats, and Veiseh’s lab leveraged that in its design.

“We found foreign body reactions safely and robustly turned off the flow of cytokine from the capsules within 30 days,” he said. “We also showed we could safely administer a second course of treatment should it become necessary in the clinic.”

Avenge Bio , a Massachusetts-based startup co-founded by Veiseh, has licensed the cytokine-factory technology from Rice.

The research was funded by the Cancer Prevention Research Institute of Texas (RR160047), Avenge Bio, the Emerson Collective, the Welch Foundation, the Rice University Academy of Fellows, the National Science Foundation (1842494) and the National Institutes of Health (R01DK120459).

Jazaeri receives compensation as a consultant on Avenge Bio’s scientific advisory board and has disclosed the relationship to MD Anderson in accordance with its conflict-of-interest policy. Nash, Jarvis, Aghlara-Fotovat, Mukherjee, Hecht, Igoshin, Zhang and Veiseh declared interests via patents filed by Rice on the cytokine factories. Igoshin, Veiseh and Oberholzer are paid consultants for Avenge Bio. Nash, Zhang, Sheth, Oberholzer, Jazaeri and Veiseh hold equity in Avenge Bio.

Rice University Bioengineer Omid Veiseh and colleagues created tiny implants that activate immune cells to destroy cancer. In a March 2022 study published in Science Advances, the researchers showed their "drug factory" implants could eradicate advanced-stage ovarian and colorectal cancer in mice in as little as six days. The treatment could be ready for human clinical trials in late 2022.

CAPTION: Rice University bioengineer Omid Veiseh with a vial of bead-like implants his lab invented to serve as anti-cancer drug factories. Veiseh and colleagues showed the implants could eradicate ovarian and colorectal cancer in mice in as little as six days. (Photo by Jeff Fitlow/Rice University)
https://news-network.rice.edu/news/files/2022/01/0124_CANCER-ovF232-lg.jpg

CAPTION: Rice University bioengineering graduate student Amanda Nash is creating cell-encapsulation technologies to treat cancer. Nash and colleagues created the technology with an eye toward rapid approval for human clinical trials, using only components that have previously proven safe for use in humans. (Photo by Jeff Fitlow/Rice University)
https://news-network.rice.edu/news/files/2022/01/0124_CANCER-anF192ah-lg.jpg